Sightseeing in Daugavpils - what to see. Complete travel guide 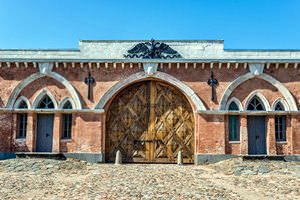 On the bank of the biggest river in Latvia, the Daugava River, tourists will find the second-largest city in the country – Daugavpils. Upon arrival in this settlement, many travelers notice that it still has architectural landmarks and buildings that unleash the heroic military past of the region. On top of that, Daugavpils is a large city with well-developed infrastructure and a large number of cultural and educational centers. Culture and history intricately intertwine in this city, making modern Daugavpils even more charming. Every traveler can find something suitable and exciting in this city, even if they come for a mere purpose of entertainment.
In 1577, the Russian tsar Ivan the Terrible captured the Livonian Dünaburg castle and ordered to build a new settlement on its site. This new town, Dvinsk, was continuously attracting Sweden and Poland, causing frequent armed conflicts. In the 50s of the 17th century, the Russians captured the town and renamed it as Borisoglebsk. This was not the end of fights for this region. In 1667, Poland captured the town, and Russia established its authority over the region again in 1772. For several centuries, Borisoglebsk was a fortress.
At the end of the 19th century, the city returned its former name, Dvinsk. However, almost thirty years later, when the Lithuanian army captured it, the town was once again renamed as Daugavpils. In the 40s, the city with a rich history returned to the territory of Latvian SSR. Local people had to face tough times during World War II when German troops occupied the city. Nazis stayed the dominant force in the region for three years. Only when the Red Army drove fascists away from the Latvian land, a period of peace started in Daugavpils. Copyright www.orangesmile.com
Daugavpils Fortress (also known as Dinaburg Fortress) is one of the most famous landmarks in Daugavpils. The building of this fortification started in 1810 but was fully completed only in 1878. This is a well-protected fort on the bank of the Daugava River. Nowadays, this is an important architectural landmark on the country level. Daugavpils Fortress is the only 19th-century military fortification of this type in Northern Europe that has survived in its original form without any major alterations. 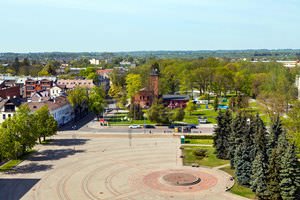 The construction of the fortress features eight bastions, six ravelins and counterguards. Besides that, there are other elements of protective facilities such as redoubts, fleches, and moats. There is a strengthened bridge on the left bank of the Daugava River. Inside, the fortress looks like a typical military camp with a central square for parades and other processions. Residential and administrative buildings surround the square.
Do you enjoy looking at sculptures? In this case, don’t forget to take a look at the gorgeous monuments and statues of various animals that decorate the streets of the city. For example, there is a statue of a cat. In modern days, this statue has become very popular with both residents and guests of Daugavpils. This is a typical meeting place that is usually quite crowded. Small children are particularly in love with the statue – they enjoy petting the cat and climbing on its back. Why is there a statue of a cat in the city? There are several theories about this. Perhaps, the history of the city had many sad moments over the centuries, and the cute cat looks friendly as if it is telling that the city wants to remain friendly and peaceful. 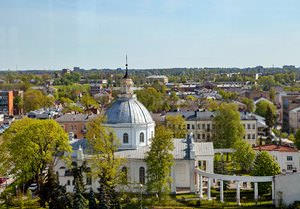 Daugavpils is home to the oldest and biggest museum in the Latvian Republic. The Daugavpils Museum of Regional History and Arts was established in 1938. A visit to this museum is an excellent opportunity to see may different exhibitions dedicated to such sciences as archaeology, ethnography, numismatics, and bonistics. Besides that, there are several interesting exhibitions of historic photographs and documents, many of which are very old. Visitors can see what carts and arts were the most popular in Latvia in the past.
The most popular exhibitions are dedicated to the history and cultural life of the Daugavpils region. The halls dedicated to the marvelous nature of the region and its unusual flora also have many visitors. Art connoisseurs will find it interesting to visit the halls with works of Rothko and Baulin. The museum is a popular tourist destination – more than fifteen thousand people visit the venue every year in order to find out more about the rich history and culture of Daugavpils. 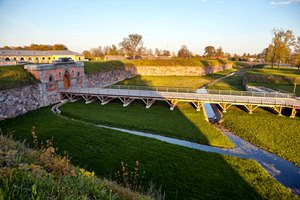 There are four trains that connect Riga and Daugavpils. The journey time is roughly four hours. There are also buses that depart from Riga’s bus station every two hours. The bus ride to Daugavpils will be a bit shorter – three and a half hours. Buses departing from Rēzekne and Aglona reach Daugavpils faster – in three and one and a half hours respectively. Tourists can also reach Daugavpils by train as there are trains that connect this city to Gomel, Vilnius, and Saint-Petersburg.
This guide to iconic landmarks and sights of Daugavpils is protected by the copyright law. You can re-publish this content with mandatory attribution: direct and active hyperlink to www.orangesmile.com.

City tours, excursions and tickets in Daugavpils and surroundings

National and city parks around Daugavpils
♥   Nature Park 'Svente' , 3.3 km from the center. On the map 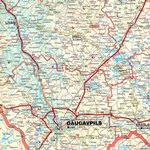 Search touristic sites on the map of Daugavpils

Sightseeing in regions nearby Daugavpils

Vilnius
The Cathedral. The magnificent Vilnius Cathedral is a spiritual and political center of Lithuania. The first Christian church on the site of the cathedral was built by King Mindaugas soon after his conversion to Christianity. The history of the modern building was started in the XV century. During its centuries long history the cathedral has survived in numerous fires and ... Open »
Bauska
There is an interesting exhibition dedicated to the lives of Germans and Jews in Bauska. Other floors of the building display different art exhibitions. The museum has an unusual layout – there are streets inside the building. Visitors can see an old hair salon of the previous century, a forgery, and a photo studio that displays photographs and methods of photography used ... Open »
Cesis
The history of the town started more than eight centuries ago. First mentions of this settlement date back to 1206. This is when Venden Castle was built in the area. The castle gave the town its first name. Initially, the castle was made from durable wood. A local tribe known as the Vends was the first dweller in the building. Modern Latvians originate from this tribe. The ... Open »
Riga
The political, cultural and economic center of the country is defined by luxury buildings in the modern style, beautiful park complexes, as well as standard buildings that have remained in the city from the Soviet era. The Old Town is full of wonderful houses, small shops and restaurants. Nowadays, this part of Riga is included in the list of world heritage sites by UNESCO. ... Open »
Kaunas
Probably, only Vilnius can be called a competitor of Kaunas as in this city you will find as many historical sights and signature places, as in the capital of the country. The old part of the city hides numerous buildings referred to 20s-30s of XX century, numerous cathedrals and churches, and the main sight of the city - Kauno pilis. The beauty of architectural facilities is ... Open »
Jurmala
Naturally, such a multinational city has a diverse culture. Gastronomic traditions, perhaps, are the best reflection of this peculiarity of Jurmala. In this resort, you can find restaurants of different cuisines of the world. However, foodies are usually particularly interested in the national cuisine restaurants. As a rule, they have a historical design similar to an old ... Open »

All about Daugavpils, Latvia - sightseeings, attractions, touristic spots, architecture, history, culture and cuisine. Prepare your trip together with OrangeSmile.com - find out the 'must see' things in Daugavpils, which places to visit, which excursions to take, where the breathtaking views are waiting for you. Planning your trip with this travel guide will help your to get the most out of Daugavpils in few days.