Sightseeing in Mahilyow - what to see. Complete travel guide 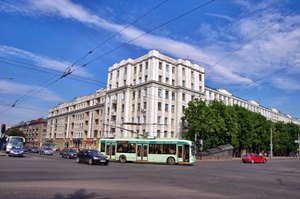 Mogilev is one of the ancient cities of the country that was inhabited already in the prehistoric era. At the beginning of the 12th century, the city was a center of the large feudal settlement and served as a fortress. Historians suppose than Mogilev was conquered and destroyed completely by the Mongol Tatars at the beginning of the 13th century. The first written references to Mogilev date back to the 14th century. At that time, this big city had already been a part of the Grand Duchy of Lithuania. At the end of the century, it came to Polish Queen Yadviga who married Lithuanian King Yagaylo.
It is still not known why the city is called Mogilev. The origin of the name is associated with two interesting legends. One of them is connected with the name of Gaul King Lev who allegedly built a castle here. Of course, merchants, craftsmen and anglers started settling near the castle.
The other legend says that the city was named after the grave of Lev, a fearless and incredibly strong Belarus warrior. From the beginning, he was an ordinary peasant but then became a robber and a chieftain because the local boyar stole his bride. The robber was murdered by the woman he loved. She married the boyar and killed her ex. The warrior was buried on the bank of Dnepr. There was a high mound atop the grave. This place was called The Grave of Lev. When the city was formed here, it was called Mogilev. The mountain that is close to the city is called Myshakovskaya. Now, there is the Yubileyny District at its site. Copyright www.orangesmile.com
In the 16th century, Mogilev came to the wife of Polish King Alexander, Elena. The city is still rapidly developing. The strong military fortress has recently been built here. The wartime on these lands has never come to an end because when the residents had to defend the castle, their families hid in the shelters outside the castle. The castle itself was wooden but very few people knew it. The locals constantly covered the walls with lime and painted white, so all the visitors sincerely admired this stone wonder of Mogilev. The Mogilev Castle wasn’t conquered by enemies, so it went down in history as an impregnable fortress. 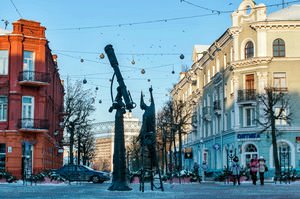 One of the main historical symbols of Mogilev is the City Hall. The building that the city guests can see today is new. The historic construction located at its site was destroyed completely. For the natives, the City Hall has become an important symbol for the years of its existence, so it was decided to restore it. The building was reconstructed almost in its historic original form.
Another unique religious monument is the Church of St. Nicholas. It is an only historical monument in East Belarus built in baroque style. At the end of the 17th century, the big friary was located at its site but it hasn’t existed for a long time. In the 19th century, the historical constructions were in disrepair and the condition of the church was maintained. After the Revolution, the temple was closed and rebuilt into a book archive. At that time, the walls of the temple were plastered. During the reconstruction, the pristine paintings of the 17th century hidden under a coat of plaster were found. Now, the church is famous for unique architectural, art and religious values. 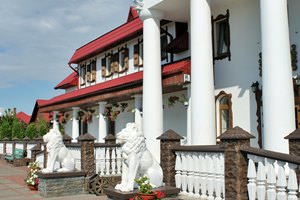 One of the most-visited culture centers of Mogilev is the Local History Museum started being formed in 1928. Now, the museum houses a lot of unique art and religious exhibits. One of the main values of the museum is the Cross of St. Euphrosyne of Polotsk that is one of the most important religious relics of Belarus. The visitors of the museum have an opportunity to see the collection of old jewels. Most of the exhibits are dedicated to the Great Patriotic War.
In the immediate surroundings of Mogilev, there is the interesting outdoor ethnographic museum called the Belarus Village. It is adorned in the style of the classic village of the 19th century. The museum will impress not only with multiple unique examples of traditional architecture, but also with its picturesque landscape design. On its territory, there are different themed constructions that house the collections of interesting exhibits. There are weaver and ceramist’s houses, an old bakery, a forge, and a carpenter's house. One of the most interesting architectural monuments of the 18th century is the Palace of Archbishop built in accordance with the best classical traditions.
This guide to iconic landmarks and sights of Mahilyow is protected by the copyright law. You can re-publish this content with mandatory attribution: direct and active hyperlink to www.orangesmile.com.

City tours, excursions and tickets in Mahilyow and surroundings

Survived castles around Mahilyow
♥   Castle 'Kopys' , 47 km from the center. On the map

In recent years, more and more tourists prefer to visit Nesvizh. This interesting city is mostly famous for Nesvizh Castle. The castle was built in the end of the 18th century in accordance with the project of Giovanni Bernardoni. The palace was considered one of the most beautiful buildings of its era. It was also an impenetrable fortress with thick walls and a system of protective graffs. … Open

Search touristic sites on the map of Mahilyow

Sightseeing in regions nearby Mahilyow

Vitebsk
The first settlements on the territory of modern Vitebsk appeared in the Stone Age. Archaeologists have discovered ancient cities, barrows, as well as household items and tools of labor of the first settlers. The very first principality which arose on this territory is Polotsk. It was located in the basins of the Western Dvina; partially Neman and Berezina. Due to its favorable ... Open »
Smolensk
Smolensk is also the homeland of outstanding figures of science and culture. The other distinctive feature of the picturesque city is plenty of monuments. In one of the city parks, you can see the monument dedicated to world-famous composer Mikhail Glinka. One of the most interesting and most beautiful monuments is the Monument to Alexander Tvardovsky and Vasily Tyorkin. ... Open »
Gomel
At this time in the city 17 thousand people lived already 17, but the fire which suddenly collapsed on it brought serious adjustments in the way of life. Almost completely burnt out, the city was quickly restored, and soon it became a major railway junction. Industry actively developed here and the population grew. The territory of the city began to elevate, conduct water ... Open »
Minsk
The ancient city with an interesting history, Minsk is famous by numerous cultural centers and great atmosphere that is perfect for relaxed rest. Minsk was almost completely destroyed during the Second World War; today only several buildings of the 17th century belong to the oldest architectural monuments. All other monuments have been destroyed. However, there are truly many ... Open »
Bryansk
Until 1655, Bryansk actively supported trade relations with Ukraine. Since 1885, because of a decline in the standard of living, uprising began at the city's enterprises, and the first political organizations were formed. At the frontier of the 19th and 20th centuries, many factories in Bryansk specialized in the manufacture of wagons, platforms and locomotives. In the second ... Open »
Daugavpils
Daugavpils is home to the oldest and biggest museum in the Latvian Republic. The Daugavpils Museum of Regional History and Arts was established in 1938. A visit to this museum is an excellent opportunity to see may different exhibitions dedicated to such sciences as archaeology, ethnography, numismatics, and bonistics. Besides that, there are several interesting exhibitions ... Open »

All about Mahilyow, Belarus - sightseeings, attractions, touristic spots, architecture, history, culture and cuisine. Prepare your trip together with OrangeSmile.com - find out the 'must see' things in Mahilyow, which places to visit, which excursions to take, where the breathtaking views are waiting for you. Planning your trip with this travel guide will help your to get the most out of Mahilyow in few days.