Sightseeing in Brest - what to see. Complete travel guide 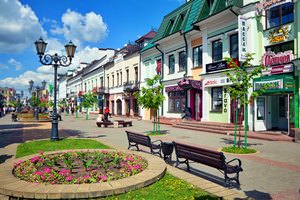 Brest is one of the oldest Belarusian cities along with Vitebsk, Turov and Polotsk. According to one of the local legends, originally on its territory was an ancient temple dedicated to the pagan god Veles, and later in its place a fortress was built. After that, Brest became a border town-fortress on the bank of the Western Bug. In the Middle Ages, it was located on the border of the Polish and Lithuanian principalities, which is the reason for its important geopolitical role. Brest actively developed as a trading city. When these lands were under the rule of the Lithuanian principality, Brest after Vilna was considered the largest populated area.
Excursion over cultural sights of Brest - 'must visit' points of interest
Brest is a very ancient city, one of the first, which was founded on the Belarusian land. It developed swiftly and confidently. It was a military fortress, a trading city, and an important …

Open
This is the first Belarusian city that received the Magdeburg right or the right to self-government. The inhabitants of the city were not only exempted from paying heavy feudal duties, but they could also choose their own magistrate. It was in this city that the first synagogue was opened, which for many centuries was the richest in the territory of the Polish-Lithuanian Commonwealth. The Lithuanian prince Vitovt granted special privileges to the Jews, and therefore they considered Brest the most comfortable city for living in Belarus.
In many ways, Brest can be considered an advanced city, since it was here that the first pharmacy and the first printing house appeared, from which came the publication of the Bible in different languages ​​and the first Primer. It was on the territory of Brest that the first high-quality roads appeared, along which it was convenient to move around to trade caravans, while on the rest of modern Belarus roads could hardly be called such. Ironically, it was in this city that the first Mint, the first school theater and even the first manufactory appeared. Brest was an important customs point; duty collection brought a considerable income and significantly replenished the city’s treasury. Copyright www.orangesmile.com
Cuisine of Brest for gourmet with top restaurants and cafe
Speaking about the culinary traditions of the city, it is worth mentioning the strong influence of Europe. The ancient Belarusian city borrowed from neighboring states a lot of interesting …

Open
Located at the intersection of major trade routes, the city developed rapidly, new residential areas, inns and markets were built. Already in the 12th century a powerful wooden castle was built here, designed to protect trade caravans heading to Europe. It was here that two powerful trading tracks crossed, one of which led to the Middle east and the Black Sea region, and the second to the Baltic states and Poland. Already in the 16th century, Brest, in terms of its administrative value and profitability, exceeded even Minsk. The peaceful existence of the city was violated by the large fire that destroyed all the wooden buildings. After that, it was decided to build up Brest exclusively with stone buildings. Some ancient buildings have survived in the city until our days. 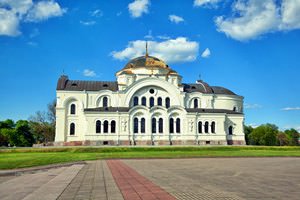 The territory of the town is conventionally divided into two parts by River Mukhavets. On its left shore, there is a beautiful modern district. When walking along the right shore, you can see outstanding historical attractions. The main symbol of the town is the Brest Fortress. Despite the fact that it was built in the 19th century, it saw the most destructive battles in a period of the Second World War. The part of the fortress was destroyed and then restored after the war. Now, there is the Museum of the Defense.
Excursion over cultural sights of Brest - 'must visit' points of interest
Brest is a very ancient city, one of the first, which was founded on the Belarusian land. It developed swiftly and confidently. It was a military fortress, a trading city, and an important …

Open
The town is also famous for its religious attractions. One of the most spectacular examples of classicism is Holy Cross Church. Its main feature is the fascinating snow-white facade. In the surroundings of the town, there is Trinity Church built in the 16th century. For hundreds of years, it has managed to preserve a lot of unique artifacts and original finishing elements. 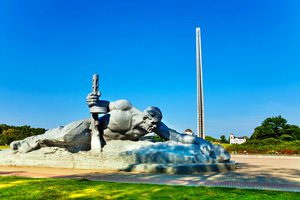 The most unusual culture center in the town is the Museum of Saved Artistic Values. It was founded at the initiative of the local customs service. As Brest is a border town, its customs officials have long been very active in countering smugglers. Over the years, they have withdrawn a lot of pieces of art, jewels, and religious artifacts that are stored in the unusual museum now.
Cuisine of Brest for gourmet with top restaurants and cafe
Speaking about the culinary traditions of the city, it is worth mentioning the strong influence of Europe. The ancient Belarusian city borrowed from neighboring states a lot of interesting …

Open
One of the tourists’ favorite evening entertainments in Brest is walks along the historical Sovetskaya Street. Here, you can see old gas lamps the lamplighter lights every evening. Many people usually watch him doing this. As for the nature attractions of Brest, the most interesting one is the Belovezhskaya Pushcha National Park. Several years ago, it was included in the list of UNESCO World Heritage Sites. In the park, you can see a bison and other animals in their natural habitat. There are also hiking routes of various lengths. Also, the guests of Brest can visit the ostrich farm that is one of the largest in Europe.

This guide to iconic landmarks and sights of Brest is protected by the copyright law. You can re-publish this content with mandatory attribution: direct and active hyperlink to www.orangesmile.com.
Brest - guide chapters 1 2 3

Survived castles around Brest
♥   Castle 'Brest Fortress' , 5.6 km from the center. On the map

National and city parks around Brest
♥   Landscape Park 'Park Krajobrazowy Podlaski Przełom Bugu' , 32 km from the center. On the map

♥   Landscape Park 'Sobiborski Park Krajobrazowy' , 79.1 km from the center. On the map

In Minsk, tourists will find a diversified cultural program, but the capital is not the only city with rich heritage. The ancient city of Zaslawye is home to a large open-air museum. Tourists will find there magnificent churches, old castles and fortresses, ancient protective facilities that belong to 15th – 17th centuries. Other notable sights include the Transfiguration of the Saviour Church, “Mlyn” ethnographic complex, the Museum of Music Instruments and the Cathedral of Virgin Mary. … Open

Search touristic sites on the map of Brest

Sightseeing in regions nearby Brest

Bialystok
Bialystok is built on the territory, which has been owned by Mazovetsky princes. Starting from the 30s of the 19th century this place began its quick developing. Among leaders were textile and wool industries. Today these are the main sources for the town’s budget. There are several hundreds of architectural and historical sites in the town. Many of them are included into ... Open »
Lublin
Lublin is one of the biggest cities in the east-central part of Poland. The city was founded by settlers on the Czwartek hill in the VI century. Already in the X century Lublin was a fort-town. Multiple protective facilities have been made to save this place from dangers from the east. Only during World War I Lublin becomes the part of Germany and Austria-Hungary. The so ... Open »
Warsaw
Warsaw is a city with long history and difficult destiny. After World War I around 85% of the city’s buildings were destroyed and all power was thrown into the development of the old city and its historical sites. The majority of sculptures, monuments and buildings were restored almost from nothing, making Warsaw even more miraculous and unique. The city is known as a ... Open »
Druskininkai
Grutas Park, which is situated in the city’s suburbs, is an important historical landmark for Druskininkai. The territory of the park is an open-air museum surrounded by tall trees. Viliumas Malinauskas established the park in 2001. There is an exhibition dedicated to GULAG during the Soviet Union period in the park. Monuments, which were previously in different cities in ... Open »
Lviv
Lvov is a magnificent place. This is one of the richest cities of Ukraine in terms of architecture and culture. Lvov is widely known in Europe. It is even called "pearl" of Eastern Europe due to its uniqueness and beauty. Lvov conquers even most hard-to-please visitors and tourists keep the memories of it long after the visit. Travellers will find numerous architectural ... Open »
Olsztyn
The heart of Olsztyn hides one more wonderful attraction that tourists should include in their vacation plan. This is a gorgeous neo-Baroque building named the Castle of Warmian Bishops. It was a bishop’s residence starting from 1772. Over its centuries-long history, the castle was restored several times. Initially, this was the archpriest’s house. When Warmian bishop ... Open »

All about Brest, Belarus - sightseeings, attractions, touristic spots, architecture, history, culture and cuisine. Prepare your trip together with OrangeSmile.com - find out the 'must see' things in Brest, which places to visit, which excursions to take, where the breathtaking views are waiting for you. Planning your trip with this travel guide will help your to get the most out of Brest in few days.