Video of flights over top monuments of Melbourne in HD format.
Use 'Full Screen' mode.
Royal Exhibition, Government House, Shrine of Remembrance, and Etihad Stadium are the architectural landmarks, the names of which always remind you the words 'Melbourne' and 'Australia'. And this is natural, since these prominent landmarks are the ones that shape the historical and architectural look of Melbourne. Let’s look at these landmarks from high above, namely, from a bird’s eye view – click the video and make a flight over the architectural ensemble of Melbourne. In the main article, you can also read the most interesting facts about every famous landmark of Melbourne. 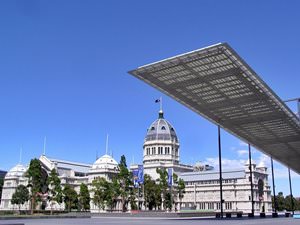 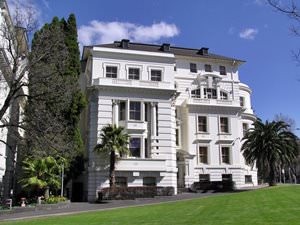 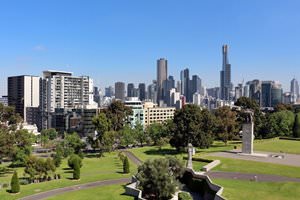 Facts:
» The Shrine of Remembrance is one of the largest war memorials in Australia. It was originally erected in honor of the people of Victoria who were in army during World War I, but soon it began to be considered the largest memorial in Australia dedicated to the memory of all Australians killed in all the wars, in which the country has participated.
» The memorial complex hosts annual celebration of Australian and New Zealand army Corps (25 April) and Remembrance Day (November 11).
» The monument was designed by architects Philip Hudson and James Wardrop, who were veterans of the World War I.
»  Design of the monument was based on the ancient Mausoleum of Halicarnassus and the Parthenon in Athens.
» The sanctuary with the Stone of Remembrance can be seen at the center of the monument. The phrase ‘Greater love hath no man’ is carved on the stone.
» The Stone is arranged in such a way that every year on November 11 at 11am the sunbeam passing through the hole lights the word ‘love’. Every year thousands of people come to look at this exciting spectacle. 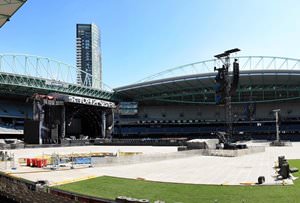 Facts:
» The Etihad Stadium is the first multi-purpose sports and entertainment center in Melbourne with a capacity of 55 thousand people.
» The stadium has the ability to carry out sports, cultural and recreational activities in all weather conditions thanks to its retractable roof.
» The stadium was opened in 2000. Now it hosts more than 100 events annually, such as concerts, Australian or European football, rugby competitions or cricket cups.
» There are restaurants, cafes and bars in the entertainment area, and lots of shops close to the center.
» The Etihad Stadium was the venue for concerts of Bon Jovi, Eminem, U2, Andre Riez, Robbie Williams, AC/DC and many others. 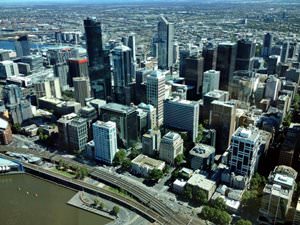 Facts:
» The Eureka Tower is the highest skyscraper in Melbourne and one of the tallest buildings on the Australian continent.
» The height of the building is 297 meters. It consists of 91 ground and 1 underground floor.
» Construction of the facility began in August 2002 and completed in June 1, 2006. Official opening of the skyscraper was held on 11 October 2006.
» There is an observation deck on the 88th floor of the building, which offers a breathtaking view of the city.
» The Eureka Tower is one of the tallest residential buildings in the world. 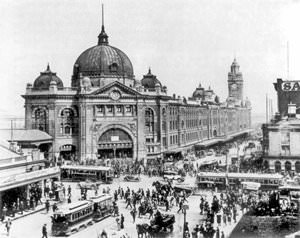 Facts:
» Flinders Street Station is the oldest railway station in Australia, recognized as the national monument of architecture. After reconstruction and modernization of the station, its building has become an ornament and pride of the city.
» This grand structure built in 1910 has a rich and interesting history.
» The amazing facade of the station building designed in Victorian style is decorated in gold tones. The large dome with a spire and a high clock tower with balustrades and sculptured columns is particularly notable.
» Melburnians and tourists often meet under the clock, referring to the building of the old station.
» Among the many rooms inside the station building, the magnificent ballroom is particularly popular among residents and tourists.

CONTINUE - PART II »»
This guide to architectural sightseeing in Melbourne is protected by the copyright law. You can re-publish this content with mandatory attribution: direct and active hyperlink to www.orangesmile.com.
Melbourne - guide chapters 1 2 3 4 5 6 7 8 9 10 11

Build your walking routes in Melbourne on the landmark map

Architectural landmarks in the regions around Melbourne

Adelaide
St. Peter’s Cathedral blessed in 1848 belongs to the English Diocese. It is a historical city attraction and is located not far from the city center. The building is designed in Neo-Gothic style of the late 19th century. The cathedral is distinguished by vertical and pointed cones (spires) and eight bells. There are no unnecessary luxurious decorative elements inside. There is the best organ in the world. Worshipers collected £1 200 ... Open »
Sydney
The Sydney Opera House is the Sydney's main attraction and one of the most recognizable buildings in the world. The Opera House, designed in style of expressionism, is recognized as one of the greatest buildings of modern architecture in the world. It has become the hallmark of Sydney. The Sydney Opera House was opened on October 20 1973 by Queen Elizabeth II. Construction of the opera lasted for fourteen years and cost102 million dollars. ... Open »
Brisbane
You can have a bird’s-eye view of the Australian city of Brisbane from the top of Brisbane City Hall. The building was opened in the 1920s. A clock tower stretches for 91 metres towards the sky. It has 4 massive bells that weigh three tons. Tourists have an opportunity to get inside the gigantic clock face. There’s a concert hall with an organ in the building. A circular hall often hosts mass events. There are also a gallery museum and ... Open »
Auckland
The Sky Tower is a TV tower built in 1997. It is 328 m high. It is the 13th in the list of the World Federation of Great Towers. When the tower was constructed, the impact of 8 magnitude earthquakes and violent storms with a wind speed of 200 km/h. On the TV tower, there are three observation platforms at different heights. Three glass lifts accommodate 225 people. You can reach the top within 40 seconds. In the tower, there are a lot ... Open »
Jakarta
The Arabic name of the mosque is “independence”. It gained its name in commemoration of freedom from Dutch domination. Masjid Istiqlal was built at the site of the former fortification in the middle of the 19th century. In 1955, the contest on design projects was won by a Christian architect. The construction lasted 17 years. The new building was officially built in 1978. It accommodates up to 120 thousand people. The main building has a ... Open »
OrangeSmile.com - online travel reservation expert providing reliable car rental and hotel booking services. We feature more than 25.000 destinations with 12.000 rental offices and 200.000 hotels worldwide.
Secure Server