«« BEGINNING - PART I
Video of flights over top monuments of Melbourne in HD format.
Use 'Full Screen' mode.
In this article, dedicated to the architecture of Melbourne, we will 'fly' over such iconic historical monuments as State Library of Victoria, St Paul Cathedral, Rod Laver Arena, and Rialto Towers. In addition to the virtual flight video, we offer the most important and interesting facts about every landmark, including high-quality photographs. You can also use this article to make your own excursion tour in Melbourne. Simply use the icon

to locate the object of interest on the map of Melbourne. 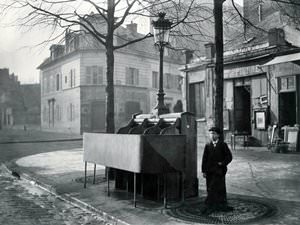 Facts:
» The State Library of Victoria is the central and largest library in the state of Victoria in Australia.
» The Library boasts its collection of literature that consists of more than 1.5 million volumes of books and 16,000 periodicals.
» Among the treasures of the library are diaries of the city's founders, John Batman and John Pascoe Fawkner, as well as the works of Captain James Cook.
» The library building originally housed the National Gallery of Victoria and Melbourne Museum.
» On the lawn in front of the main entrance to the library, you can see a lot of tourists, staff of nearby offices and students of the University of Technology. This busy place is very popular among young people and is always crowded with tourists.
» Next to the building you can see several statues and monuments, including the statue of Sir Redmond Barry, the statue of St. George slaying the dragon, the statue of Joan of Arc and the sculpture of Charles La Trobe. 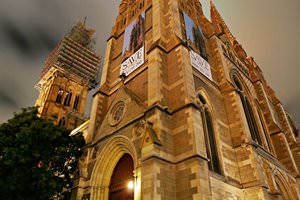 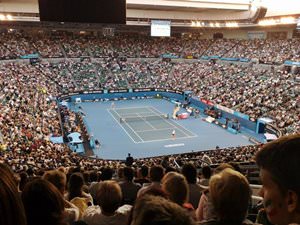 Facts:
» Rod Laver Arena is the arena, where the Australian Open Cup is held.
» At the time, the arena was renamed in honor of Rod Laver, the three-time winner of the Australian Open and one of the greatest tennis players of Australia.
» The Arena is designed for 16,820 people; annually it’s taking about 1.5 million visitors.
» The arena provides a possibility to hold meetings in the hot and rainy weather due to its movable roof.
» Besides tennis cups, motorcycle racing, music concerts, conferences, competitions of WWE wrestling Federation, and ballet performances are held at the Arena. Such bands as Slipknot, Iron Maiden, Linkin Park, Korn, Nickelback and others have performed at the venue. 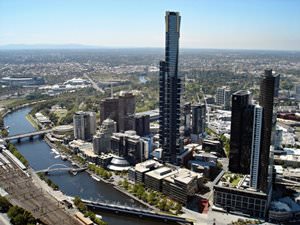 Facts:
» The Rialto Towers are two legendary skyscrapers of glass and concrete.
» The height of the taller skyscraper is 251 meters, the lower the skyscraper has a height of 185 meters.
» The high-rise restaurant is situated on 55th floor of the South Tower.
» The South Tower is of 63 floors, 3 of which are underground, and the North Tower is of 43 floors.
» The South Tower annually hosts the race, during which it’s necessary to overcome 1,450 steps.
»  If we assume from the ground to the roof, the Rialto Towers is considered to be the second tallest reinforced concrete building and the highest office building in the Southern Hemisphere. 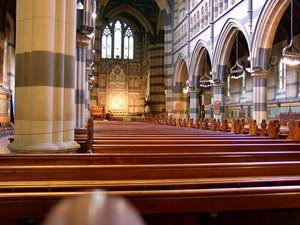 This guide to architecture monuments in Melbourne is protected by the copyright law. You can re-publish this content with mandatory attribution: direct and active hyperlink to www.orangesmile.com.
Melbourne - guide chapters 1 2 3 4 5 6 7 8 9 10 11

Plan your own tour over Melbourne on the monuments map

Search for architecture monuments of Melbourne on the map

Tours through neighbours of Melbourne

Adelaide
St. Peter’s Cathedral blessed in 1848 belongs to the English Diocese. It is a historical city attraction and is located not far from the city center. The building is designed in Neo-Gothic style of the late 19th century. The cathedral is distinguished by vertical and pointed cones (spires) and eight bells. There are no unnecessary luxurious decorative elements inside. There is the best organ in the world. Worshipers collected £1 200 ... Open »
Brisbane
You can have a bird’s-eye view of the Australian city of Brisbane from the top of Brisbane City Hall. The building was opened in the 1920s. A clock tower stretches for 91 metres towards the sky. It has 4 massive bells that weigh three tons. Tourists have an opportunity to get inside the gigantic clock face. There’s a concert hall with an organ in the building. A circular hall often hosts mass events. There are also a gallery museum and ... Open »
Singapore
The Singapore Flyer reaches a height of 55-storey building with a total height of 165 m. The Singapore Flyer is 30 m higher than the London Eye. The Singapore Flyer has been the world's tallest Ferris wheel until March 2014, when Las Vegas ride was put in action. It’s 2 meters higher than the Singapore Flyer. The wheel diameter is 150 m. The wheel itself is embedded in a three-story terminal building housing shops, bars and restaurants. ... Open »
Kuala Lumpur
The Petronas Towers are the highest twin towers in the world. They have 88 floors and are 452 m high. According to the project, the buildings feature a huge size and a complicated structure. Their foundation is 100 m beneath the ground and is the deepest in the world. The towers are connected by a glass bridge that is situated at a height of 170 m. There is also an observation platform. As the towers swing, the bridge joint with ball bearings ... Open »
Bangkok
The Grand Palace is the Bangkok's most famous landmark. The palace consists of several buildings, occupying an area of 218 thousand m2 and is surrounded by four walls of 2 km long. The Grand Palace served as the residence of the Kings of Thailand. Its construction began during the reign of King Rama I in 1782. There are various government offices, temples and the Royal Library in the palace. In addition, many galleries of the palace are ... Open »
OrangeSmile.com - online travel reservation expert providing reliable car rental and hotel booking services. We feature more than 25.000 destinations with 12.000 rental offices and 200.000 hotels worldwide.
Secure Server