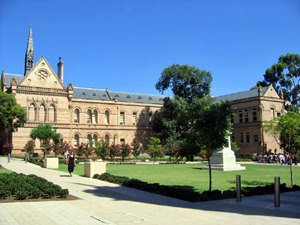 Adelaide Town Hall, Adelaide Festival Centre, Parliament House, and National Railway Museum are the architectural landmarks, the names of which always remind you the words 'Adelaide' and 'Australia'. And this is natural, since these prominent landmarks are the ones that shape the historical and architectural look of Adelaide. Let’s look at these landmarks from high above, namely, from a bird’s eye view – click the video and make a flight over the architectural ensemble of Adelaide. In the main article, you can also read the most interesting facts about every famous landmark of Adelaide. 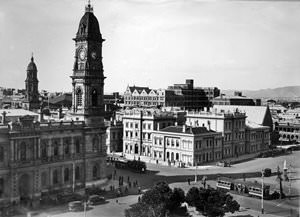 Facts:
» There is one of the oldest building and architectural attractions in the city square. It belongs to the town hall.
»  The building is distinguished by an emblem on the outer wall. The lion and the kangaroo are painted on the national emblem. There is the embossed miner’s hand above the emblem. The pick embodies fertility of the local soil. Figurines of ships, the picture of the sheep, the bull’s head, and the wheat sheaf represent the activity of the first settlers. There are the words of the Latin motto below. The text is a call to unity to prosper.
»  The building started to be built in 1863. It was finished three years after.
»  The tower is named after the Prince of Alberta. The clock appeared here in 1935.
»  Public music concerts and gala receptions are held in the Town Hall. The Beatles performed on the upper terrace in 1964. 300 000 fans gathered together to see their favorite musicians. It was their biggest audience.
»  Symphony orchestras also perform here because the hall has the best acoustics in the world. 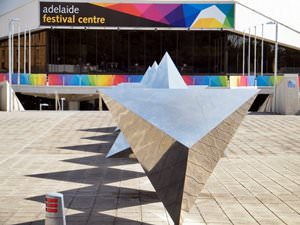 Facts:
» The Adelaide Festival Centre is located in a picturesque place near the embankment.
»  The building resembles geometrical figures with its appearance. The silver and white roof and the facade are seen from afar. The festival centre is multifunctional. Its construction cost $21 million.
»  The halls of the Festival Centre have excellent acoustics. The main building belongs to theatrical personalities. The construction of this building cost $10 million. 1980 was marked by the opening of the Festival Centre.
»  The Centre consists of several halls. Their total capacity is 5 000 thousand people. The audience hall can accommodate 2 thousand spectators.
»  Near the square, there is a cubic sculptural composition created by the West German master. It resembles a stone garden of concrete. Besides aesthetic delight and pleasant pastime, the citizens intended to avoid ventilation holes in the territory.
»  In the Festival Theatre square, there is an environmentally friendly statue. It was made of stainless steel.
»  The suspension bridge for pedestrians, cafes, and boutiques have been recently built here. 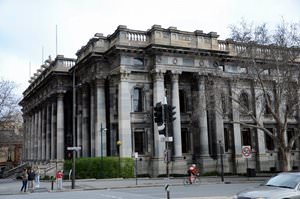 Facts:
» The legislative authority settles in the building built in the middle of the 20th century. It is located in the city center.
»  Due to financial constraints, the Parliament House was being built piecemeal. Its full restoration lasted 65 years (1874-1939).
»  The building was constructed in the Renaissance style by the project. The house is faced with marble slabs.
»  The construction began with the West Wing. It cost £165 404 at that time. There were cabinets and the House Chamber. The construction of the West Wing was ceased by the First World War. In the 30s, Sir John Bonython invested 100 000 in further construction.
»  It helped create new working places in the period of unemployment. The Parliament House opening ceremony was visited by important state officials.
»  To commemorate the construction, the British Parliament gifted the Lion of the Royal Emblem. The stone beast was placed on the building. You can see this symbol and the plaque on the front panel of the house.
»  Originally, it was planned to decorate the building with columns, towers, and a huge dome. This plan has not been executed. 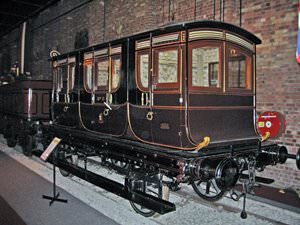 Facts:
» The exhibition space of the museum impresses with its size. It is divided into two hangars. Some exhibits are displayed on the open platform but are not subjected to natural forces.
»  The museum is aimed at showing railway mechanisms and trains and at telling the history of the development of services in this field. Here, it is also interesting to learn about the facilities in carriages and conditions, in which people travel. You can not only see everything inside, but also touch exhibits. There is the replica of luxury compartments with leather furniture.
»  For tourists’ convenience, a small train with an open platform travels around the territory. It runs on coal.
»  Exhibitions stands are miniature but it is easy to understand what they mean.
»  More than 400 railway exhibits also include carriages and locomotives. The museum has a total area of 8 hectares.
»  Here, you can see such interesting exhibits, as the train traveling by the same route since 1862, the fastest locomotive running at a maximum speed of 202.7 kmh, and the compartment where queens traveled. Graphic pictures of the schedule, tickets, outfits of workers, and movable models of trains are not the full list of historical exhibits kept here.

Facts: » Brougham Place Uniting Church is a church in North Adelaide. The House of God is a local attraction.
»  The facade of the building faces the green recreation area. It is faced with light brown sandstone blocks. They attached to each other so tightly that make the construction monolithic.
»  The staircases lead to the entrance. They are separated with narrow rails. There are lanterns at the bottom of the stairs.
»  The main entrance of three doors is framed with small columns. Their tops have arched framing. There are round stained glass rose windows above them. There is a three-tiered tower above the central doorway.
»  The construction was projected by the architect Thomas Frost. The first stone was laid in the foundation on 15 May 1860. Eleven years later, the tower was added to the main building. It is crowned by a metal patterned spire.
»  The outer walls are blank. In the walls, there are small niches with columns inside.
»  The lecture hall appeared in 1878.
»  The organ was placed in the church only in 1871. It was quite strong at that time. The church is located on Brougham Place.
»  It had belonged to the Congregational Church before.

Facts: » The mansion located at the foot of the hill is one of the buildings preserved in their original form.
»  The hostess of the house, Ursula, planted a garden in the English classic style around the summer residence.
»  Rare species of flora grow in the green area. Blooming shrubs, the rosary, different species of lilies, and orchids are still in an excellent condition. In the inner courtyard, there is a picturesque ivied gazebo. In the territory of the residence, there are paths of pebbles and shale. Ponds and the orchard make it extraordinary.
»  Sir Edward gifted the house to his wife. The Haywards were a good judge of British art. Here, you can see the excellent collection of picturesque canvasses and antique items including furniture. The building is faced with Basket Range stone.
»  The residence with a total area of 40 hectares was a wedding gift to the newlyweds.
»  At one time, it was visited by art connoisseurs. Also, events, where invited artists and composers performed, were held here.
»  Then, the mansion became a place for local aristocrats.
»  After the death of owners, the Carrick Hill came to the government.
»  Every year, the historical residence is visited by 100 000 people.

Facts: » The AAMI Stadium is a sports complex. Football matches are mostly held here.
»  At the same time, 51240 spectators or 5% of the city population can watch the game.
»  The stadium is a home arena for Adelaide United FC. It also serves as a base for the National Soccer League.
»  The AAMI Stadium is second to none in the size of the field among other sports complexes in South Australia. The playing surface is about 2 hectares. One corner is 165 m away from the other. The ground is covered with natural grass. 17 species of grass have been planted here.
»  During night competitions, the stadium is illuminated by lights of special towers.
»  Foreign troupes often choose the stadium for meet-and-greets.
»  The sports ground was constructed in 1971. The stadium is roofed. TV displays let see what happens in the arena.
»  The Northern Stand was opened in 2001. Old aluminum benches were replaced by plastic seats.
»  The record number of fans (66 987) was reported at that time.

CONTINUE - PART II »»
This guide to architectural sightseeing in Adelaide is protected by the copyright law. You can re-publish this content with mandatory attribution: direct and active hyperlink to www.orangesmile.com.
Adelaide - guide chapters 1 2 3 4 5 6 7 8 9 10 11 12 13 14 15

Build your walking routes in Adelaide on the landmark map

Architectural landmarks in the regions around Adelaide

Melbourne
The Royal Exhibition is the amazing building located in the center of Melbourne. The Royal Exhibition Building is back onto the Melbourne Museum; that’s the largest object in the collection of the Museum of Victoria. In 1940s the building was called the White Elephant due to its decor. The Royal Exhibition is widely used for various exhibitions such as the annual International Flower Show of Melbourne. Private tours of the Melbourne Museum ... Open »
Sydney
The Sydney Opera House is the Sydney's main attraction and one of the most recognizable buildings in the world. The Opera House, designed in style of expressionism, is recognized as one of the greatest buildings of modern architecture in the world. It has become the hallmark of Sydney. The Sydney Opera House was opened on October 20 1973 by Queen Elizabeth II. Construction of the opera lasted for fourteen years and cost102 million dollars. ... Open »
Brisbane
You can have a bird’s-eye view of the Australian city of Brisbane from the top of Brisbane City Hall. The building was opened in the 1920s. A clock tower stretches for 91 metres towards the sky. It has 4 massive bells that weigh three tons. Tourists have an opportunity to get inside the gigantic clock face. There’s a concert hall with an organ in the building. A circular hall often hosts mass events. There are also a gallery museum and ... Open »
Auckland
The Sky Tower is a TV tower built in 1997. It is 328 m high. It is the 13th in the list of the World Federation of Great Towers. When the tower was constructed, the impact of 8 magnitude earthquakes and violent storms with a wind speed of 200 km/h. On the TV tower, there are three observation platforms at different heights. Three glass lifts accommodate 225 people. You can reach the top within 40 seconds. In the tower, there are a lot ... Open »
Jakarta
The Arabic name of the mosque is “independence”. It gained its name in commemoration of freedom from Dutch domination. Masjid Istiqlal was built at the site of the former fortification in the middle of the 19th century. In 1955, the contest on design projects was won by a Christian architect. The construction lasted 17 years. The new building was officially built in 1978. It accommodates up to 120 thousand people. The main building has a ... Open »
OrangeSmile.com - online travel reservation expert providing reliable car rental and hotel booking services. We feature more than 25.000 destinations with 12.000 rental offices and 200.000 hotels worldwide.
Secure Server