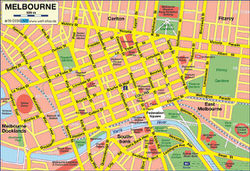 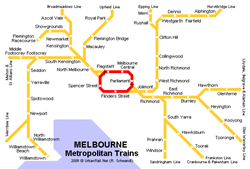 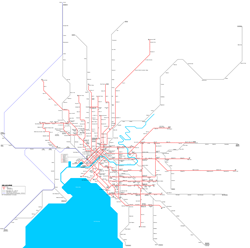 Interactive maps of hiking and biking routes around Melbourne

1. You can zoom in/out using your mouse wheel, as well as move the map of Melbourne with your mouse.
2. This interactive map presents two modes: 'Biking Routes' and 'Hiking Routes'. Use the '+' button on the map to switch between them.

This Melbourne map has two modes: 'Railway Network' and 'Landscape & Rural Map'. Use the '+' button on the map to navigate.

Overview of festivals and celebrations in Australia

Another patriotic feast is the ANZAC Day celebrated in late April. Its abbreviation stands for the Australian and New Zealand Army Corps, a symbol of national self-determination. The main event of the holiday is a parade in which veterans of past wars and modern soldiers participate. On this day, in Melbourne a traditional football match is held, which annually gathers tens of thousands of spectators. In the state of Western Australia on the 26th of January, is celebrated the Australia Day. It is associated with the landing on the west coast of the first settlers who later founded the largest city of the state – Perth. On the day of the holiday, the “Australian of the Year” honorary award takes place, and a state ball is held in the state government building. The holiday is not without concerts, cannon salutes, and exhibitions. … Open

Our guide to Melbourne

One of the most popular ethnic cuisines is considered to be Vegemite pasta which is made of celery and onion and added with different herbs and spices. The treat may be served as a solo dish or added as a substantial accompaniment to meat or fish dishes. Sea foods are of immense importance in ethnic cuisine of Australia. Genuine gourmands should definitely estimate a fried tempura fish. In addition to the dainty … Open

Traditions and mentality of Melbourne

Actually the city residents are rather responsible and dutiful and their simplicity and ease in attitude towards sufficient matters solution is one of the remarkable ethnic traits of the local folks. The same impressive and remarkable trait of the character of local people is their individualism. Notably this character trait finds its reflection in any sphere of life. No matter it is gastronomy preferences or … Open

Theater admirers will have an opportunity to visit the Princess Theater. This opera house is located in a classy Victorian building. For the history of existence, the building of the theater was repeatedly rebuilt and modernized. The last major reconstruction took place in 1989. This ancient theater has its own unusual symbol - a ghost, for which a free seat is always left in the hall. In 1888, the opera Faust was … Open

Melbourne for children - what to visit

Melbourne is acclaimed for its picturesque parks which are also very popular among tourists with children. One of the most picturesque places in the city is the Royal Botanic Gardens of Melbourne. They are eagerly visited not only by inquisitive voyagers, but also by biologists from all over the world. In this botanical garden, you can see many rare plants and trees brought from all over the world. The garden is … Open

A very unusual shopping and entertainment center is The Jam Factory housed in an old industrial building. Today, within its walls, there are clothing stores of famous brands and one of the city's largest cinemas. You can spend the whole day in the center exploring shop windows and tasting specialties at local restaurants. Flemington Racecourse Street Market is a perfect place for doing gastronomic shopping. … Open

2. The city is structured rather compactly that is why the best way to explore its territory is walking tours. Thus the tourists will have a chance to visit all of the most significant landmarks and not to miss popular restaurants and entertaining centers. 3. Renting cars is not recommended for foreign tourists at all. First of all the city of Melbourne lacks free parking lots and the traffic on … Open