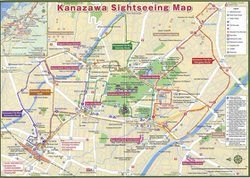 Interactive maps of hiking and biking routes around Kanazawa

1. You can zoom in/out using your mouse wheel, as well as move the map of Kanazawa with your mouse.
2. This interactive map presents two modes: 'Biking Routes' and 'Hiking Routes'. Use the '+' button on the map to switch between them.

This Kanazawa map has two modes: 'Railway Network' and 'Landscape & Rural Map'. Use the '+' button on the map to navigate.

Japan has a very well developed transport infrastructure, including international air traffic. Today, there are about a hundred different airports in the country and one third of them are considered to be of international standards. Haneda Airport is one of the largest in Japan. It is located in the capital of the country and conducts both domestic and international flights. As of last year, the airport served more than 70 million passengers. Such statistics allows the airport of Haneda to be considered the busiest in all of Asia. There are three terminals at the airport, and special buses move between them. The airport’s infrastructure is very developed. In the spacious waiting rooms there is free Wi-Fi access, you can buy literature, have a snack, drink, visit the nursery room, stroll around the souvenir shops, buy goods in the duty-free shops, as well as stay in a hotel. … Open

Shirakami-Sanchi is a mountain reserve in the province of Aomori. Due to the unsuitability for breeding mushrooms shiitake, many beeches spared by farmers were preserved in it. Together with beech trees, hornbeam, dimorfant and Cercidiphyllum japonicum (Katsura) grow in the forest. In the reserve, there is a triple waterfall which has become a favorite tourist destination. A magnificent view of the surrounding area opens up from the highest peak of the reserve. Every year, musical festivals are organized at the foot of the mountain. Hakone National Park is located on the island of Honshu. It is famous for their geothermal spring which has made it the center of spa treatment. A combination of the picturesque nature of the region with the curative effects of the springs helps improve well-being and promote a healthy vacation. … Open

Our guide to Kanazawa

Without a doubt, Kanazawa Castle is the main attraction of this Japanese city. The city of Kanazawa grew around this castle. The Maeda family was the founder of the gorgeous building. Each new owner was adding additional details to the construction depending on own taste and preferences. This is how the castle was growing in size, getting new floors and supporting buildings. The Kanazawa Castle was reconstructed … Open

Maps of Nagano
Fans of unusual natural sights will be interested in visiting Kagami-ike Pond whose name translates as “Mirror Pond”. Its water is crystal-clear, so you can see your reflection as clear as in a mirror. The lake is located in a very beautiful natural area, surrounded by mounts and hills. The surrounding mountains are covered with dense vegetation and are reflected in the ... Open »
Maps of Nagoya
Nagoya will certainly impress fans of outdoor activities, as the choice of magnificent parks here is really great. The Tokugawa Garden with convenient pathways is incredibly beautiful. Besides age-old trees and enchanting waterfalls, here you can find several lovely restaurants of the national cuisine where you can have a pleasant time and recover after an eventful day. The ... Open »
Maps of Kyoto
Another must-have while in Kyoto is trying yourself as a samurai. Of course, it won't be possible to become a true warrior - training takes many years - but you can still try. Such an opportunity is provided by tours from Kyoto Samurai Experience. Well, those who want to feel like a ninja will be delighted with Ninja Dojo and Store where they can attend classes on how to ... Open »
Maps of Osaka
Some of the most interesting places in Japan are centers where they teach the country's traditional activity - the tea ceremony. Osaka is no exception - the city offers Kimono Tea Ceremony Maikoya offering great workshops. Everyone is invited to visit this place to get closer to the local culture. The center also has excellent decorations for photoshoots. However, Osaka is ... Open »
Maps of Kobe
The city has several wonderful zoos, and Kobe Animal Kingdom is among the most original ones. Enclosures created for animals are as open as possible, allowing visitors to admire them in all their glory. Some animals are allowed to be fed. You can arrange a great memorable photo shoot session here in the zoo. For the youngest visitors here is a special enclosure with pets, ... Open »
Maps of Niigata
On the outskirts of the city, you will find Onteng Senamy hot springs, which are also often visited by tourists. Most vacationers visit this thermal resort located near the coast in summer. Apart from natural baths filled with thermal water, guests of the resort can enjoy many more activities. They can stroll through rice plantations, as well as visit an old sake factory. ... Open »
Maps of Kanagawa
If you like attractions and mind-blowing racing, pay your attention to Yokohama Cosmo World. It is a popular theme park located in the city of Yokohama. In Yokohama Cosmo World, visitors can choose from a broad range of different attractions, starting from a giant Ferris wheel, the highest point of which offers an excellent panorama of the city, and up to a motordrome and ... Open »
OrangeSmile.com - online travel reservation expert providing reliable car rental and hotel booking services. We feature more than 25.000 destinations with 12.000 rental offices and 200.000 hotels worldwide.
Secure Server