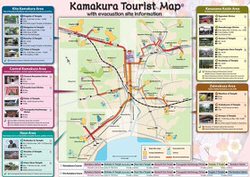 Interactive maps of hiking and biking routes around Kamakura

1. You can zoom in/out using your mouse wheel, as well as move the map of Kamakura with your mouse.
2. This interactive map presents two modes: 'Biking Routes' and 'Hiking Routes'. Use the '+' button on the map to switch between them.

This Kamakura map has two modes: 'Railway Network' and 'Landscape & Rural Map'. Use the '+' button on the map to navigate.

The cherry blossom festival “Hanami” enjoys the love of the Japanese who are extremely sensitive to the process of observing flowering trees. Sakura blooms lasts for only a few days and when the cold comes, the flowering period lasts only a few hours. In addition to natural beauty, the locals see a profound meaning in this, which consists of the fragility and transience of human life. Sakura’s blooming begins at different times in different cities. Officially, the beginning of the holiday is announced when the first flower blossoms in the trees near the ancient Buddhist shrine of Yasukuni in Tokyo. This usually occurs in the middle or end of March. … Open

Our guide to Kamakura

In 1928, a museum opened in Kamakura. The main aim of this establishment was to preserve the unique art and crafts of the country for the next generations. The collection of the Kamakura Museum of National Treasures is very big and contains roughly five thousand different items including sculptures, paintings, and various craftworks made by local artisans. Nowadays, the building of the Kamakura Museum of National … Open

Maps of Kanagawa
Keikyu Aburatsubo Marine Park, which is located in Miura, is primarily famous for its marine fauna. The park’s visitors can watch interesting shows with dolphins that make marvelous stunts and attend no less interesting excursions. Large aquariums in Keikyu Aburatsubo Marine Park have become home to different species of fishes, reptiles, and amphibians. In comfortable ... Open »
Maps of Tokyo
If you are not afraid of height and desire to feel adrenaline rush in the veins, hurry to visit the Palette Town Wheel in Tokyo, which is considered one of the highest on the planet. The Ferry Wheel raises the bravest on the height of 115 meters for a few minutes. This grandiose attraction is located on the artificial Odaiba Island in the Tokyo Bay. The wheel is famous for its ... Open »
Maps of Nagano
In winter, Nagano is visited by skiing and winter entertainment enthusiasts, as a rich sports infrastructure left over from the Olympics at the resort. There are ski slopes of various difficulty levels, including those suitable for professional athletes, beginners, and even children. Near the city of Nagano, tourists can find several sports resorts. The most attractive ones ... Open »
Maps of Nagoya
Kakuozan Shopping Street is of great shopping enthusiasts’ interest. The main peculiarity of the lively street is small shops where you can buy original designer accessories and hand-made souvenirs. The Nagoya TV Tower that offers its guests a lot of exciting attractions deserved a special attention too. In addition to visiting of viewing platforms, the vacationers have an ... Open »
Maps of Niigata
Travelers with children would be happy to explore the Niigata Science Museum located in the city. The museum is largely aimed at young visitors - almost all of the exhibits presented are interactive. Children are told how planes and cars work and invited to conduct fascinating experiments in physics and other fields of science. The tours are organized so well that even adults ... Open »
Maps of Kyoto
If you'd rather prefer to relax after an active pastime, there is no better place than spas and "onsens" (especially when it comes to Kyoto). Thus, the best facilities of this kind include Kurama Onsen and Funaoka Onsen, as well as many other equally interesting centers. The choice of bars and nightclubs is also impressive in Kyoto. These are L'Escamoteur, the most popular ... Open »
OrangeSmile.com - online travel reservation expert providing reliable car rental and hotel booking services. We feature more than 25.000 destinations with 12.000 rental offices and 200.000 hotels worldwide.
Secure Server