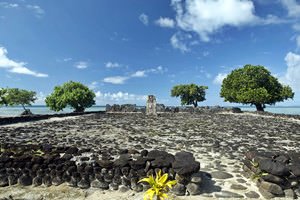 French Polynesia is composed of more than a hundred islands that are united in five archipelagoes. Residents of each archipelago are proud of their unique culture. However, in general, this French island territory has common features, created as a result of the mixing together of the traditions of the Polynesians, the Chinese and the French. Polynesian cuisine reflects the characteristics of each archipelago. The ration of the inhabitants of French Polynesia is based on fruit, meat, bread and fish. You can see traces of French, Chinese, Italian and local influences in the Polynesian dishes. The islanders living in the countryside usually provide themselves with their own food. They grow gardens and orchards, as well as fish and raise livestock. Some products are also imported into the country, rice for instance.
National traditions and mentality of people in French Polynesia
Most of the inhabitants of French Polynesia (about 80%) are ethnic Polynesians or Polynesians mixed with Europeans. The rest of the islanders are …
Read further
Residents of French Polynesia often eat breadfruit, cassava, pork, bread, and seafood. Chicken meat is eaten less frequently. On holidays as well as once every week, food is cooked in many homes on a special stove using volcanic stones heated by fire. Banana leaves are placed on top of the food, and then everything is covered with several layers of earth for about three hours. The food prepared in this way is eaten with hands, dipping piece by piece into coconut sauce. Often on the islands, people often eat snacks. “La Ota” prepared from diced vegetables and raw fish, soaked in coconut milk and lime marinade, as well as a sandwich with tuna, ham, lettuce, tomatoes and cucumbers are some popular dishes.
Life on the islands makes it possible to include fish and other seafood products in the diet. The salty Pacific waters generously serve as a source of seafood to French Polynesia. In addition, fish and other inhabitants of the waters are caught in the lagoons and rivers on the islands. Dishes prepared from such marine and freshwater fish as white fox, golden mackerel, peto, bonito, parrot fish, barracuda and tuna are very common. “Fafaru” is cooked from fish marinated in sea water. Due to its strong peculiar smell, this dish often leaves tourists feeling confused. Sea urchin, octopus, oysters and freshwater shrimp, are also constantly included in the diet of locals. Copyright www.orangesmile.com
French Polynesia cultural sights. What to see?
French Polynesia is rich in historical sites. The most interesting of them are the temples, museums and archaeological sites. They can narrate the …
Read further
The islands of French Polynesia are rich in awesome tropical fruits. Papaya, grapefruit, mango, banana, pineapple, lime, coconut and other tasty and healthy fruits are eaten separately or added to fish and meat dishes. Coconut curry is another rather extraordinary dish. Chutney is an island version of Indian sauce made from mango. In the Polynesian hot dog, the bun is replaced by a banana and the sausage by chopped coconut. Lime juice is added to many dishes to give them a juicy taste. The juice is often used to prepare sauce. Vegetables are eaten less frequently, with banana-plantain, tomato, carrot and cassava being the most popular. Taro roots are boiled, and the leaves are added to stewed chicken meat. 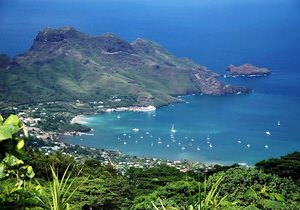 The short and succinct word “poi”, refers to the most popular Polynesian dessert. This is taro root pudding, the sweetness of which comes from vanilla, papaya, pumpkin or banana. Brown sugar is sometimes added. An obligatory final touch is the addition of fattening coconut sauce to the pudding. Also, Polynesians love a variety of fruit pies: coconut, banana, pineapple, guava, and so on. You can also enjoy a drink of coconut water, fresh fruit juices and cocktails, as well as white and red wine imported from France. The local wine of French Polynesia is called “Vin de Tahiti”. Fruit rum, imported as well as locally brewed beer, and excellent espressos are some of the popular drinks on the islands.
Things to do in French Polynesia - active leisure
French Polynesia is a real paradise for lovers of outdoor activities. This is because all year round, there are lots of interesting and fun activities …
Read further
On holidays, Polynesians must prepare meals in an underground furnace. Food prepared in this way is eaten with the hands from wooden plates. At Christmas, residents eat fish and oysters. In places more exposed to European influence, typical European and American Christmas dishes, such as turkey, are often included in traditional festive food. If in a restaurant or cafe it is customary to leave a tip, then a polite mention of this will be attached to the bill. However, in most places of public catering on the islands, it is not accepted to leave tips. 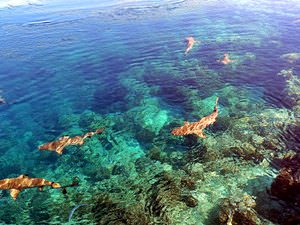 You can taste real Polynesian food in any of the countless cafes and restaurants in French Polynesia. The beach restaurant “Opoa” in the municipality of Utyuroa serve dishes in which both French and Polynesia culinary traditions are brought together. They are also known to serve purely European food. Lovers of fresh seafood go to the restaurant “The Shell” on the island of Moorea. Each dish here is beautifully and originally designed. Also on the island is a café called “Lollipop Ice Cream”. It is a cozy cafe with a large selection of homemade ice cream. Makharepsky cafe “Carameline” is known for its great fresh pastries and excellent coffee. It is important to remember that prices in the country often “exorbitant”, especially with regard to food in hotels. It is often better to buy food at the store than to pay for the food offered by hotels.

This article about national cuisine of French Polynesia is protected by the copyright law. You can re-use the content, but only under the condition of placement of an active link to www.orangesmile.com.
French Polynesia guide chapters 1 2 3 4 5 6 7 8 9 10 11 12

Cuisine and restaurants in popular cities of French Polynesia

Papeete
The Le Belvedere restaurant offers its guests a good selection of French dishes. The eating house has its own wine cellar. Its collection will be of great surprise even for the most sophisticated wine connoisseurs. In the evenings the restaurant is filled with an amiable cozy atmosphere. One of the main features of the Le Belvedere Restaurant is its vast choice of inimitable desserts. Another attractive gastronomy destination in Papeete is the Le Roulottes eating house being one of the most … Read more

Vaiare
The food is slowly cooked for several hours – such cooking method makes all dishes get an absolutely unique taste. It is possible to try tamaara in both prestigious restaurants and modest cafes. It is also important to mention that fans of exotic food will easily find suitable dishes not only in elite restaurants but also in more affordable dining venues. Bread tree fruit remains a popular national dish. Local chefs use it to cook all kinds of creative dishes. Roasted bananas are also a … Read more

Moorea
Snack Mahana also invites guests to try out a large selection of well-loved Polynesian dishes. Its spacious, classic-style hall is perfectly suited for all sorts of special occasions. The venue will satisfy the taste of seafood fans, meat-eaters and vegetarians alike. As the name suggests, the signature dish of Pizza Daniel is... pizza. Talented chefs cook this Italian staple food in many different variations, and regular customers often order a specialty seafood pizza. All meat fans will … Read more

Bora Bora
There are a lot of excellent restaurants in Viatape. Connoisseurs of the French cuisine and seafood will be delighted by the Mai Kai Bora Bora restaurant. It is located near the yacht harbor and welcomes guests from the early morning to late night. In the evenings, live music is played for visitors. At the St. James restaurant, the visitors have a wide choice of popular national specialties and exquisite local dishes. The regular guests often order a special ice-cream for dessert here. … Read more

Manihi
The best way to start your acquaintance with Polynesian dishes is to be invited home to one of the local inhabitants. Restaurants are mostly tourists-oriented, so not all the traditional peculiarities of the cuisine are considered there. The majority of Manihi’s population eat breadfruit or breadfruit cheeps and cassava, which is quite exotic for a casual European. People usually start their meals with snacks, however, sometimes these can be the only dish, for breakfast, for example. Ota … Read more

Tahiti Island
Needless to say that the islands are famous for their fish. Here you will taste the delicious tuna; you can find all possible dishes with this fish on Tahiti. It is also the right place to try the swordfish and mahi-mahi. However, if you are one of the reckless taste testers, you can experiment with fugu fish (blowfish), but it is pure exotica for gastronomic thrill-seekers. A gourmet might want to taste a local dish – Poisson cru à la tahitienne; it is prepared with raw fish marinated in … Read more