National traditions of French Polynesia. Habits, mentality and the way of living 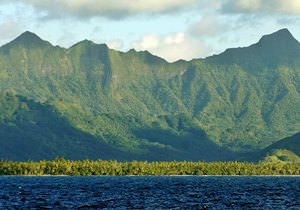 Most of the inhabitants of French Polynesia (about 80%) are ethnic Polynesians or Polynesians mixed with Europeans. The rest of the islanders are mostly Chinese and Europeans. The overwhelming majority of the population speaks both French and Tahitian. Polynesians have a positive attitude towards France, but a part of them wants independence and favors a return to the heritage of their ancestors, at the same time the other is proud of belonging to French culture. Half of Polynesians consider themselves to be Protestants, and about 35% are Catholics. You will also find on the island adherents of other religious conviction such as Seventh-day Adventists and Mormons. Regardless of religion, many islanders believe in ancestral spirits that can appear in the world of the living as ghosts and even make contact with relatives.
When and where to 'hang out' in French Polynesia - festivals and celebrations
French Polynesia celebrates Christmas on the night of December 24-25th along with the entire Catholic world, and this date falls on the hottest and …
Read further
One of the most interesting concepts in French Polynesia is the mystical “mana”. Mana can mean a lot of things: vitality, independence, beauty, grandeur, intelligence, truth, and so on. It mainly depends on the situation and what needs to be expressed. When people say about a person: “he has mana”, often means that he has attained some kind of enlightenment. Another distinctive Polynesian trait is widely spread tattoos. Tattooing has always been an important part of the Polynesian culture and could be drawn to the skin as a sign of belonging to some tribe or a symbol of the transition from childhood to adulthood. The word itself “tattoo” is of Tahitian origin. The Tahitians had a god of tattoos, known for decorating all the fish. Each line of the tattoo on the body, each dash is still considered to be connected with mana. Most of the islanders believe that every Polynesian should have at least one tattoo.
Although tensions may arise between ethnic groups in French Polynesia due to cultural differences and belonging to different stratum of society, it is not typical for locals to discriminate because of nationality or religion. Hate crimes on the islands are also very rare. The poor, as well as the rich from the upper class among the Polynesians, are relatively few; majority of the islanders belong to the middle class and the lower middle class. Wealthy people can always be identified by huge houses, expensive branded clothing and the possession of imported items, such as cars. Copyright www.orangesmile.com
For active traveler - national parks, landscapes and nature of French Polynesia
The amazing nature of French Polynesia has glorified the islands as a piece of paradise. The forests, beaches, lagoons and mountains of the country, …
Read further
The traditional gender roles of the inhabitants of the islands of French Polynesia do not imply any discrimination or superiority of one sex over the other. There is however the general belief that male and female roles and activities complement each other and cannot exist separately; they are equally important and should always be respected. Men are usually considered the heads of the family, and women often act as their faithful helpers. However, in recent years, more and more women have begun to penetrate into areas mostly occupied by men (for example, agriculture). Although managing the home is also expected from working-class women, some men share household work with them. 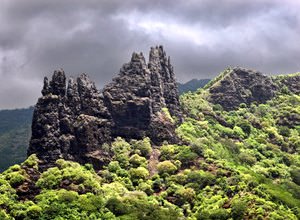 Polynesians are fairly tolerant of homosexuality. Moreover, on the islands, it is often possible to meet people called “faafafine” – these are men with female manners who were brought up in the family as girls. A similar phenomenon existed among the Polynesians even before the invasion of the Europeans. Boys are beginning to be raised as girls, usually due to the absence of girls in a family. Faafafine are not transgender people, that is, they do not feel like women in male bodies. They are considered to be the third sex and may have connections with men, but they are not considered homosexual.
Unique sights of French Polynesia from our series 'Extreme places on Earth'
These spots really worth the attention of a real traveler-researcher. …
Read further
The islanders can marry both officially; inviting guests, celebrating a wedding and church rites, or unofficially by simply living together as spouses and being faithful to each other. The second type of relationship is regarded by the Polynesians as a legal marriage. Islanders, have an interesting custom of wearing a Tahitian gardenia flower behind their left ear, especially if they have a partner. On the other hand, those who are actively searching for a partner, place a flower behind their right ear. Polynesians often live together in families of three or more generations. Adoptions are not uncommon. 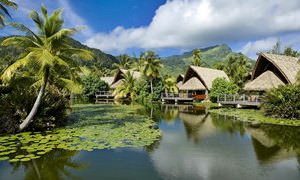 Polynesians are incredibly hospitable, generous and very friendly, but often do not initiate contact with strangers because of their inherent modesty. However, the heart of a local resident can be won with a sincere smile or greeting. Polynesians can be best described as relaxed and calm people. They love to dance, relax and eat – and do not worry about those extra kilograms at all. It is not customary to keep track of your weight and engage in sports to maintain slenderness on the islands. The very nature of the islands is conducive to good nature and relaxation: it is always warm here, with wonderful flowers growing about, and there are no poisonous plants and animals in the country at all.

This article about national traditions in French Polynesia is protected by the copyright law. You can re-use the content, but only under the condition of placement of an active link to www.orangesmile.com.
French Polynesia guide chapters 1 2 3 4 5 6 7 8 9 10 11 12

Papeete
The main symbol of the festival is bright magnificent costumes which the participants of the fest specially prepare for the show. The preparation to the festival takes up to several months as its program is rather diverse and rich. Apart from unforgettable dance shows the guests of the festival may attend different sport competitions and even take part in some of them. Different cultural and gastronomy shows, kids’ performances as well as grand sales on the local markets have turned to an … Read more

Vaiare
If you look at Moorea from high above, you will notice that the island has a shape that resembles the heart. Because of this interesting peculiarity, many newlyweds choose the islands as their honeymoon destination. Some arrive to the gorgeous island for the wedding ceremony, and some come to relax during the honeymoon. Local people treat wedding ceremonies seriously, so they organize absolutely stunning and mesmerizing ceremonies for guests. Newlyweds get a beautiful marriage certificate … Read more

Moorea
The cultural traditions of local residents are pretty outlandish and sophisticated, and are reflected in absolutely all areas of life. For instance, the islanders pay special attention to their wardrobe and never wear black clothes. Travelers should also respect this tradition and wear the most colorful and brightest clothes they have. If you don’t have any suitable clothes, then you can always buy some at local markets. They offer a large choice of bright shirts, pareos, and swimwear … Read more

Bora Bora
The main goal of the festival is to initiate the guests of the island into the local culture and way of living. Here, travelers can watch exciting sports competitions. In the evening, they can come to the beach and barbecue parties. There are also special entertainments for children. The colorful beach Bora Bora Liquid festival lasts for 7 days. Those who want to devote their vacation to sightseeing tours should take part in the festival. Its program includes many interesting excursion events. … Read more

Manihi
The majority of locals speak more or less French, but when it comes to English, only those who constantly communicate with tourists can speak it. Unfortunately, there are not many such people here on a small Manihi. People use mana in their speech pretty often. It’s a Polynesian word meaning «inner strength». Mana can be translated in everything – life force, beauty, mind, independence, charisma. It depends on the context. For instance, they can say «they have a mana» meaning … Read more

Tahiti Island
During the colonization period the arrival of the European missionaries had a lasting destroying impact on the local culture. Just in the 20th century, with a view to attracting tourists, the ethnic culture got a chance to start its dynamic recovery. Polynesians set a high value on the spiritual constituent of our life. Tahitians think that being large-hearted and smiling will help them to create the right and positive environment for communication and social interaction. The Tahitian culture … Read more