Cuisine of Manihi for gourmets. Places for dinner - best restaurants 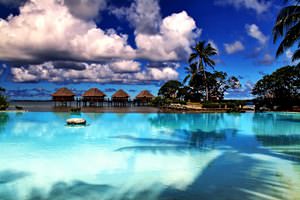 Locals had been improving their recipes from island plants, seafood and games for many centuries. Interaction with Europe and Asia influenced the local cuisine and diversified it with French, Italian and Chinese dishes which are also cooked on Manihi in modern days. Moreover, continuous communication with French culture has also changed locals’ attitude to food. Presently, there are lots of virtuoso cooks who skillfully play with diverse combinations and believe that nice presentation is as important as taste. There are dozens of cafes in touristic points which serve traditional European dishes.
Family holidays with kids in Manihi. How to entertain your child, things to show to children.
If you’ve decided to travel to Manihi together with your children, you should be very careful about choosing a hotel. The island is quite small and sparsely populated, that explains …

Open
The best way to start your acquaintance with Polynesian dishes is to be invited home to one of the local inhabitants. Restaurants are mostly tourists-oriented, so not all the traditional peculiarities of the cuisine are considered there. The majority of Manihi’s population eat breadfruit or breadfruit cheeps and cassava, which is quite exotic for a casual European. People usually start their meals with snacks, however, sometimes these can be the only dish, for breakfast, for example.
Ota ika is vegetables with raw tune sliced in cubes marinated in lime juice and coconut. It’s significant to remember that many traditional Polynesian dishes are cooked with raw fish. It’s normally eaten with lime or lemon juice. Still, those with a weak stomach would probably not appreciate trying it. As for snacks, people here prefer standard sandwiches borrowed from Europe. They usually take tune, ham, tomatoes, cucumbers or onions for their sandwiches. Copyright www.orangesmile.com
Authentic traditions, festivals and lifestyle of Manihi inhabitants
People of Manihi are open, really kind and a little bit modest. Despite the many centuries of being ruled by Europeans, people have never forgotten their traditions and been honouring …

Open
You should definitely try tamara'a. It’s not just one dish with a particular recipe but a whole group of unique dishes. They all are united by one cooking process – the dishes should be put in ahima'a (underground oven). Ahima'a is a deepening in the ground with hot stones in it. It’s extremely easy to cook food there. You put pieces of meat, fish, seafood or vegetables in a row alternating with banana leaves. Then the sort of layered «cake» is covered with stones and left for about three hours. And by the end of that time, tamara'a is ready. Traditionally, one eats the dish just with hands. So, a person takes a good piece and puts it into special coconut sauce. People generally cook it for big celebrations. 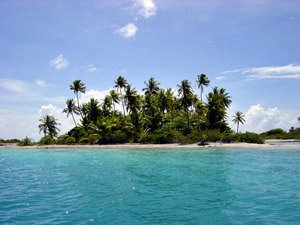 Those who adore fish should definitely like the island. You can order a mackerel marinated in coconut milk, a grilled parrotfish or a baked barracuda. Tuna is especially tasty when it’s cooked by local chefs. One more fascinating meal is fafaru – a fish marinated in seawater. Stewed shrimps, baked octopus and grilled sea urchin are worth trying.
Excursion over cultural sights of Manihi - 'must visit' points of interest
It's hard to call Manihi a densely populated territory. The last census showed that just about 800 people inhabit the island, and the main activity here is still fishing just like it was …

Open
Shish kabob can be cooked from fish or meat, usually, cooks take pork. Don’t miss trying a suckling pig or curry pork with taro. Casual steaks are also highly popular around the local population. Cassava with stewed chicken, coconut curry and mango chutney are rather peculiar dishes too. It’s an interesting fact that simply boiled taro is just eaten as a separate dish. A papaya salad with smoked breadfruit tastes really nice. 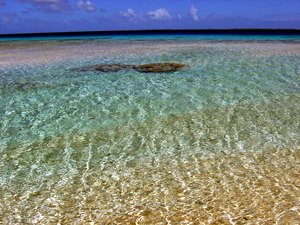 Poi is a dessert from taro with vanilla and pumpkin or bananas. It’s served with pretty greasy coconut cream. Locals especially like diverse sweet pies, like ones with coconut, guava, bananas or pineapples. Bananas can be fried, baked, mixed with other fruits and vegetables and served in different variations. As for drinks, take a fresh-squeezed juice or coconut water. Vines – whether local or French ones – are highly popular here. Various cocktails with tropical juices, rum or vodka. Hinano is a local kind of beer is actually tasty. In addition, alcohol from all around the world is brought to the island in great quantities.

This guide to cuisine and restauraunt in Manihi is protected by the copyright law. You can re-publish this content with mandatory attribution: direct and active hyperlink to www.orangesmile.com.
Manihi - guide chapters 1 2 3 4 5 6 7 8

City tours, excursions and tickets in Manihi and surroundings

Residents of French Polynesia often eat breadfruit, cassava, pork, bread, and seafood. Chicken meat is eaten less frequently. On holidays as well as once every week, food is cooked in many homes on a special stove using volcanic stones heated by fire. Banana leaves are placed on top of the food, and then everything is covered with several layers of earth for about three hours. The food prepared in this way is eaten with hands, dipping piece by piece into coconut sauce. Often on the islands, people often eat snacks. “La Ota” prepared from diced vegetables and raw fish, soaked in coconut milk and lime marinade, as well as a sandwich with tuna, ham, lettuce, tomatoes and cucumbers are some popular dishes. … Open

Searching where to eat - restaurants and cafe on Manihi map

Cuisine and restaurants in the neighbours of Manihi

Tahiti Island
Be sure to try the dish, which is called “tamaaraa” and can be found at every restaurant. The ingredients used for it and their proportions can differ according to the place where the dish is prepared, but the cooking methods are almost the same. It is cooked in the traditional Tahitian underground oven called “ahima'a”. The ahima'a consists of a hole dug in the ... Open »
Papeete
The Le Belvedere restaurant offers its guests a good selection of French dishes. The eating house has its own wine cellar. Its collection will be of great surprise even for the most sophisticated wine connoisseurs. In the evenings the restaurant is filled with an amiable cozy atmosphere. One of the main features of the Le Belvedere Restaurant is its vast choice of inimitable ... Open »
Vaiare
The food is slowly cooked for several hours – such cooking method makes all dishes get an absolutely unique taste. It is possible to try tamaara in both prestigious restaurants and modest cafes. It is also important to mention that fans of exotic food will easily find suitable dishes not only in elite restaurants but also in more affordable dining venues. Bread tree ... Open »
Moorea
Snack Mahana also invites guests to try out a large selection of well-loved Polynesian dishes. Its spacious, classic-style hall is perfectly suited for all sorts of special occasions. The venue will satisfy the taste of seafood fans, meat-eaters and vegetarians alike. As the name suggests, the signature dish of Pizza Daniel is... pizza. Talented chefs cook this Italian ... Open »
Bora Bora
There are a lot of excellent restaurants in Viatape. Connoisseurs of the French cuisine and seafood will be delighted by the Mai Kai Bora Bora restaurant. It is located near the yacht harbor and welcomes guests from the early morning to late night. In the evenings, live music is played for visitors. At the St. James restaurant, the visitors have a wide choice of popular ... Open »
Aitutaki Island
Papaya (or pawpaw) is the main ingredient for a bunch of local delicacies and it’s used of various ripe. What is more, there is a great variety of dishes with sauces made from coconut milk or coconut meat. Fun fact: coconut and papaya meats with lemon and spices are the most popular side dishes or appetizers here on the island. Fried green bananas and colocasia can also be ... Open »

Travel notes on best cuisine and restaurants of Manihi (French Polynesia) on OrangeSmile.com. Famous recipes and traditional dishes and courses in Manihi restaurants. Where to eat - our recommendations on popular places in Manihi, where you can taste delicious meal and also spend a good time with your friends.