Sightseeing in Tahiti Island - what to see. Complete travel guide 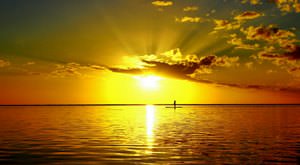 The largest island in French Polynesia and the location of its capital, Tahiti, has long attracted the attention of thousands of curious tourists. The island provides a lot of natural and historical sites; there are unique museums and cultural centers. Tahiti features world-class resort areas, so there is well-developed tourist infrastructure. In addition to gorgeous beaches the island is offering a wide variety of sports and entertainment.
Family holidays with kids in Tahiti Island. How to entertain your child, things to show to children.
Tahiti is an excellent choice for a family vacation. Your kid will definitely feel like a path-breaker on this island, which can easily be called a paradise, and will have lots of …

. In 1769, outstanding scientists and researchers came there from various countries; the famous explorer, James Cook, was among them. Scientists were attracted by the unique astronomical event that happens once in 243 years, the transit of Venus across the solar disk. Today, the legendary Point Venus is a must-see destination of excursions around the island; there is a memorial plaque on the old lighthouse.
Among the historical monuments the tomb of the last king of Tahiti, Pomare V, has to be mentioned. It was built in the late 19th century; slabs of volcanic lava and coral served as main construction materials. The construction is made keeping with the most important national traditions and thus remains one of the most revered historical monuments. Copyright www.orangesmile.com
Cuisine of Tahiti Island for gourmet with top restaurants and cafe
The cuisine of Tahiti has absorbed both the traditional meals and French classic recipes. The fresh and natural ingredients used in the local restaurants and cafes will impress you. It is …

Open
Much of the important sights are concentrated in the island's capital, in Papeete. The most vibrant area of the capital is Toata, the permanent venue for the most important cultural events. Near the area originates picturesque Bruat Avenue, where all the business facilities of the city and government agencies can be found. The amazing Presidential Palace is among them, as well as the office of the High Commissioner that is one of the most spectacular monuments of architecture on the island. 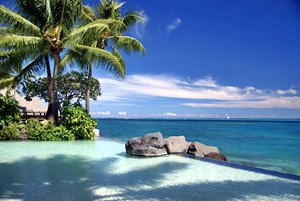 Nature lovers will like the charming BougainvillePark not far from the main post office. With regard to religious sites of the capital, the Cathedral of Notre-Dame-Papeete has to be noted. It’s located close to the bustling shopping district; the cathedral was built in 1875. It has recently undergone a complete renovation, so today it’s presented to guests of the island in all its glory. One of the oldest buildings in the capital city is the seat of the bishop; its construction took place in the 18th century.
Authentic traditions, festivals and lifestyle of Tahiti Island inhabitants
The indigenous Tahitians are of Polynesian ancestry comprising the gross of the population. French is the official language but Tahitian and French are both in use. If you know French, …

Open
You should definitely include a visit to the local cultural center in the recreation program. The Gauguin Museum is popular among tourists. The Museum of Art is situated in the spectacular building constructed in Japanese style. In addition to priceless paintings, the museum houses many unique exhibits, including personal belongings of the artist and historical documents, as well as the outstanding work by local artists. A lot of impressions gives Musee de la Perle Robert WAN

. That’s the only one cultural institution of its kind in the world; the exhibition of the museum is devoted entirely to the history of pearls. Part of the museum is the personal collection of Robert Wan, in which very rare pearls are represented. Musée de Tahiti et des Îles introduces the culture and traditions of local people. A significant part of the exhibition is devoted to peculiarities of the local environment, as well as the diversity of the underwater world. 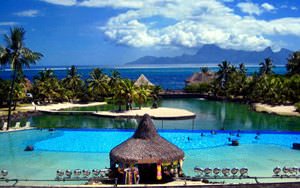 Tahiti is not rich in comfortable beaches. Travelers, who plan to sunbathe and relax on sandy beaches, should go to Puna'auia and Papara. These areas are famous for their beautiful beaches with light sand. They are almost deprived of infrastructure, so these beaches haven’t lost their original natural charm. Without a doubt, Point Venus is the most exotic beach of the island. It is covered with black sand of volcanic origin.
Excursion over cultural sights of Tahiti Island - 'must visit' points of interest
One of the places on Tahiti that one must visit is a peninsula called Point Venus. It is located on the north coast of the island. This is a legendary place where the legendary Captain James …

Open
Tourists should not neglect shopping in Tahiti. As a rule, local jewelry with pearls remains the most popular souvenir that tourists prefer to buy. There are affordable jewelry pieces, as well as exclusive and expensive items. Local souvenir shops offer interesting items by local craftsmen. Various items in the national and marine styles are usually the most popular. Female tourists may like essential oils and cosmetics with natural ingredients. The capital of Tahiti is the location of the biggest shops, the majority of which are located close to Notre Dame Square.

This guide to iconic landmarks and sights of Tahiti Island is protected by the copyright law. You can re-publish this content with mandatory attribution: direct and active hyperlink to www.orangesmile.com.
Tahiti Island - guide chapters 1 2 3 4 5 6 7 8 9 10

City tours, excursions and tickets in Tahiti Island and surroundings

Sights around Tahiti Island from our guide 'Extreme places on Earth' 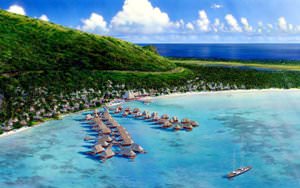 Distance from Tahiti Island center - 29 km.
There are about 16,000 people living on Moorea Island. Although there are no historical sites on the island, the local natural attractions are simply invaluable. The nature and hiking lovers can climb up the mountain Belvedere and appreciate the panorama of the island from the height, as well as the wonderfully beautiful Golfe Cooks and Opunohu. The beauty and harmony of the snow-white sandy beaches of Moore can hardly be described with the words. The island has a lot of wonderful beaches without any infrastructure. … Read further 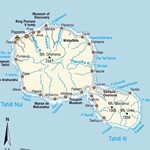 Search touristic sites on the map of Tahiti Island

Sightseeing in regions nearby Tahiti Island

Papeete
One of the oldest cities in French Polynesia, Papeete-Tahiti is the administrative center of Tahiti. The city’s name can be literally translated as "water from the basket". This unusual name appeared due to the area’s orientation – this place had always been an important center of agriculture. When first Europeans appeared on the island, they were astonished by the level ... Open »
Vaiare
Moorea Island is a real paradise for newlyweds. The reason for this lays not only in perfect climate and nature of this island, but also in its shape that resembles a heart, that’s why it has become the popular place for conducting wedding ceremonies. Most often the queue for wedding ceremonies reaches one year. Newlyweds will find here special excursion programs. Guestrooms ... Open »
Moorea
Moorea Island is a paradise for honeymooners. The reason for this is in the fact the shape of the island resembles a heart, so this place has become a popular venue for wedding ceremonies. The wedding queue usually estimates one year here, numerous special excursions are arranged for newlyweds, and hotel rooms are decorated in a matchless romantic style. It is worth mentioning ... Open »
Bora Bora
Travelers can diversify their relaxation at wonderful beaches and water sports with sightseeing tours and an acquaintance with nature and dwellers. So, you can feed sharks and stingrays in some lagoons and see fabulous coral gardens when diving. However, you can dive here only if you have some scuba diving skills. If you don’t, you can attend several training sessions and ... Open »
Manihi
Despite the fact, that large-scale archaeological excavations on the island have never been carried out, there are still some curious places for studying the regions. Scientists have found several priceless artifacts, indicating that the island of Manihi began to be actively developed and colonized in the 7th century. The best way to get acquainted with the culture and ... Open »
Aitutaki Island
Many hundreds of years ago, basalt has been the main building material; amazing building in traditional style constructed of it have perfectly preserved to this day. They are of great value, and each of the buildings has its own unique history. The largest settlement on the island is the town of Arutanga, the amazingly beautiful architectural complex; it’sstrongly ... Open »

All about Tahiti Island, French Polynesia - sightseeings, attractions, touristic spots, architecture, history, culture and cuisine. Prepare your trip together with OrangeSmile.com - find out the 'must see' things in Tahiti Island, which places to visit, which excursions to take, where the breathtaking views are waiting for you. Planning your trip with this travel guide will help your to get the most out of Tahiti Island in few days.