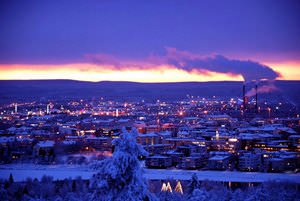 1. When going to Finland in winter, ensure you take warm sweaters and warm pants, waterproof outerwear, comfortable foot-wears, a hat, scarf and gloves.
2. In the country it is possible to issue tourist cards which guarantees you discounts when you visit museums, stores, restaurants, when renting automobiles and making trips by public transport.
3. It is prohibited to litter the streets. Locals have an extremely negative attitude towards those who do not properly dispose garbage. Violators of this law, as well as those who smoke or drink alcohol in public places will be fined.
For active traveler - national parks, landscapes and nature of Finland
Finland is a country in Northern Europe, much of which is located beyond the Arctic Circle. Its natural landscapes are represented by coastal …
Read further
4. Owners of dogs traveling around Finland with their pets should be provided with packets for cleaning the pets’ excrement during the walk.
5. Finns are accustomed to going to bed early; at about ten o’clock in the evening. Therefore, it is not worth disrupting this habitual routine by arranging renovations or noisy entertainment at a later time.
6. Locals do not take to expressing emotions openly. Thus, during conversations it is recommended to avoid high tones, violent gesticulation and physical contact with the converser.
7. In Finland it is considered indecent to ask a person about his salary, other incomes, and questions of a personal nature. Copyright www.orangesmile.com
8. The safest and most profitable means of traveling within the cities of the country is a bicycle. There are bicycle rental points everywhere.
9. When traveling in Finland by car, you should keep your headlights on at any time of the day. The use of winter tires during the winter season is mandatory. It is strictly forbidden to talk on the phone while driving. Violation of this law is punishable by a fine.
10. You cannot install antiradar in cars. Violation of the rule can attract a police search and a fine.
11. It is not customary in the country to stop a taxi along the road. They are either booked on the phone or at special car parks.
National cuisine of Finland - specialties, recipes and restaurants
The national cuisine of Finland can be called endemic: majority of its dishes cannot be tried in any other country. Traditional Finnish meal is food …
Read further
12. Finnish buses do not stop at every bus stop. While waiting for the bus, you should raise your hand so that the driver does not pass by without stopping.
13. In Finland, it is mandatory to wear reflective elements on clothing that are clearly visible to drivers during the dark hours of the day. Reflectors are also required for livestock.
14. Reserves and national parks are best explored on foot via specially equipped pedestrian routes.
15. In the country it is forbidden to place temporary camps near human settlements, damage the surrounding nature, or disturb representatives of the local fauna. Kindling of bonfires are allowed only in specially designated places.
16. Fishing with a fishing rod without a reel and ice fishing does not require licensing. For fishing on spinning or to seine, a state license is required. This license can be purchased at the network of R-Kioski or at banks. The license is issued for a week or for a year and is valid only on the territory of the region where it was obtained.
17. Resting in the Finnish forests, it is a good idea to use repellents against ticks. Before your trip it is necessary to get a vaccination against tick-borne encephalitis.

This collection of travel tips for Finland is protected by the copyright law. You can re-use the content, but only under the condition of placement of an active link to www.orangesmile.com.
Finland guide chapters 1 2 3 4 5 6 7 8 9 10 11 12

Colorful and unique places in Finland 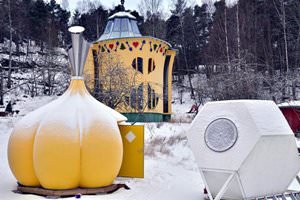 A real leader in the number of original baths and saunas is Finland. In the hospitable town of Turku, travallers will be able to visit an original sauna-garlic. A small building, in which it was opened, indeed resembles a garlic with its outlines, a unique similarity is emphasized by the walls painted in yellow. The unusual sauna has one more feature - internal acoustics, which varies depending on how water gets to the heater.

The author of the project of the unusual sauna is a sound designer Shaw Dekkirinu. He added special sockets, which he fixed on the roof. Thanks to the sockets, people from the outside can hear people hovering in the bath. The unusual sauna is located on the territory of a picturesque recreation park. A large outdoor swimming pool and a lot of terraces are open here … Read all 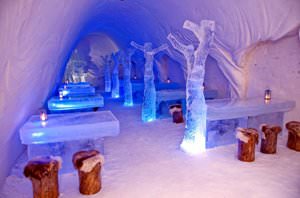 At present, there are many original ice-cream parlors around the world. The first of them - Lumi Linna Castle - was opened in the Finnish town of Kemi and is part of the chic ice hotel. The room of the restaurant is built entirely from the ice and decorated with the incredibly beautiful ice sculptures and chiselled blue ice furniture, covered with real fur. The restaurant maintains the constant temperature, which is about -5 degrees Celsius, so it is recommended to all visitors to wear themselves warm.

Thanks to the beautiful lighting the restaurant hall looks simply magical. When you eat here you do not notice any cold. Just like the ice hotel, the ice restaurant is rebuilt every year, so its interior equipment changes every year. The best designers and painters of the world are … Read all 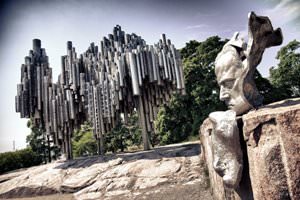 In Helsinki there is a memorial to the well-known Finnish composer Jean Sibelius. The sculpture is so original and abstract that one can hardly guess at first glance who it might be dedicated to. The author of the monument is the Finnish painter Eila Hiltunen. Their masterpiece is a composition of 600 steel listeners, which form an abstract figure and are brazed together.

On the day of the monument opening, the most influential politician of Finland participated in the ceremonial ceremony. Because of the bold and creative idea of ​​the sculptor, the ceremony threatened to fail. Although the opening of the monument has become a state scandal, the monument has decorated a Helsinki park for nearly 50 years and is the most visited sculpture in the country. The monument was opened on the … Read all
All unique sightseeing Finland

Advices for popular cities of Finland

Helsinki
1. Bargaining is not accepted in the majority of stores and shopping malls, but you can try to bring down the price a bit while walking in local markets. 2. It is not common to leave tips in hotels and restaurants of the city. As a rule, they are already included in the total bill. However, you can leave a reward of up to 1 EUR to doormen in restaurants and hotels. 3. The majority of hotels, regardless of their "star level", offers excellent service and well-equipped rooms. Tourists … Read more

Tampere
1. Travelers arriving Tampere for the first time are sure to visit the VisitTampere tourist center, which is located in the train station. Here you can take a map of the city and tourist guides in different languages and clarify all the important information. 2. The city has a developed system of public transport; buses move freely throughout its territory and suburban areas. It should be noted that some buses cruise the streets even at night, but their tariff rate is two times higher than … Read more

Oulu
1. Even though one of Finland's largest international airports is located in Oulu, you can't get here directly from any country. There are many flights connecting through Helsinki. The capital is also linked to Oulu by regular rail services. 2. The main form of public transport is buses. The cost of the ticket depends on the travel zone. For active tourists, It'd be beneficial to purchase 1- or 3-day tickets. 3. Taxi services are quite expensive in Oulu - be ready to pay about 6 euros … Read more

Lahti
1. Lahti is a multi-purpose city so it would be interesting and comfortable to visit it at any time of the year. Even in winter, the weather here is very mild and comfortable, optimal for walks and winter entertainment. 2. Besides hotel rooms, you can rent private apartments - this accommodation option would be particularly beneficial for large groups. The most attractive apartments can be found on the lakeshore. 3. Independent tourists are interested in visiting the local farmers market … Read more

Lapland
1. The region is characterized by rather harsh and snowy winters, so fans of skiing and exploring the snow-covered woods have to prepare thoroughly. However, summer in Lapland is quite pleasant; the temperature often warms up to +20C, and in July it can reach +30C. 2. Major cities of the region are interconnected by rail and bus service, but it’s not worthy to rely on public transportation. Those who come to Lapland as a big company and expect to travel around the region are recommended to … Read more