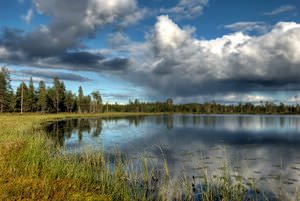 The national cuisine of Finland can be called endemic: majority of its dishes cannot be tried in any other country. Traditional Finnish meal is food based on fish, meat, potatoes, mushrooms, and milk. Most dishes have an uncommon composition: the roast can be prepared from meat and fish, while milk and butter can be combined with anything. Salads are usually used as an appetizer: “rosolli” – from cooked vegetables with herring, “salamat” – from seafood and crayfish. Traditional Finnish appetizer is “graavilohi”, slices of rye bread with pickled fish. It is seasoned with salt, pepper and sugar, sprinkled with dill, after which it is then soaked in cognac or brandy. So the fish is marinated for several days. “Voilepakakku” is bread or a cake with butter, herbs and garlic. Caviar trout is mixed with sour cream and herbs, and then spread on bread.
Finland cultural sights. What to see?
Finland is a beautiful northern country, considered the embodiment of Nordic exotics. In a relatively small area, surrounded by beautiful natural …
Read further
Finnish soups are usually prepared from sea or river fish. This can be a simple fish broth, but it can also be a Finnish fish-soup with a very special taste, containing caviar and milk. In fish soups, dairy products are usually present. “Calacchetto” soup is cooked from white type of fish. The broth is cooked with the fins and tail, with the addition of fillets and a medley of milk and fine flour. The traditional first dish from meat is pea soup “hernechetto” with pork and beef, which is eaten with kvass and rye bread. You cannot go to Finland and not taste the “klimpisoppa” – soup with dumplings, “lohikeitto” – salmon soup on a creamy basis, “majaorokku” – fish soup with dried fishes. For satiety, potatoes, carrots, onions are added to the broth.
The most popular meat dish of the country is grilled sausages. They are eaten with mustard at any time of the year. In the traditional cuisine of Finland, venison is widely used. A delicious stew with mashed potatoes and cranberry sauce is prepared with it. Venison is also fried or dried. Also of interest is “syariah”, lamb stewed in a pot. “Karyalanpaste” is prepared with two other varieties of meat; pork and beef. It is also worth trying “Mustamakkaru” which is blood sausage with pearl barley. One of Finland’s favorite hot meals is casseroles. They are prepared from pasta, meat, fish, offal, and vegetables. Gourmets will surely like dishes prepared from rabbit, elk, and bear or game. Copyright www.orangesmile.com
Things to do in Finland - active leisure
Active leisure in Finland includes all kinds of winter entertainment. The country has more than a hundred ski resorts with routes of varying …
Read further
Of all other vegetables in Finland, potatoes are mostly preferred and are used in most dishes. The various meat dishes are served with tender potato puree and cream. Finns like boiled potatoes, which are eaten together with butter and greens, fried mushrooms or mushroom sauce, herring or caviar. Another popular Finnish side dish is barley or pearl barley porridge. Groats are soaked in milk for about a day before cooking, thanks to which it acquires a rich creamy taste. Traditional Finnish porridge is pearl barley “kaalivelli” on milk with cabbage, carrots, trout and peas. Meat dishes are often served with sausages from rice or pearl barley and even berry garnish – laid out on meat with wet berries or cooked in the form of jam or puree. 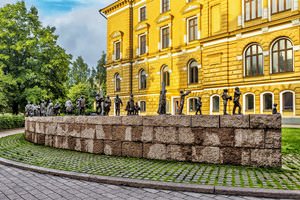 Another signature dish of the Finnish cuisine is rye bread. Among them is the traditional “reikaleipa” with a hole in the center, and crunchy rye bread “nyakkalejpa”. The famous pie “Kalakukko” is prepared on the basis of rye flour with fish and bacon. The upper part is cut off from it and the stuffing is eaten with a spoon, then an appetizing rye crust is consumed. Of equal popularity are famous open Finnish pies with rice, potatoes, barley groats or millet. Their sweet variety is pastry filled with berries, boiled eggs and dairy butter. Extremely popular are the “korvapusti” – buns with cinnamon, which the Finnish people love to eat with coffee. For breakfast, Finns pamper themselves with pies with blueberries, mountain huckleberries and cranberries which are washed down with milk.
What you need to know about Finland prior to visit - advices
1. When going to Finland in winter, ensure you take warm sweaters and warm pants, waterproof outerwear, comfortable foot-wears, a hat, scarf and …
Read further
In Finland, people are very passionate about coffee which is drunk in the morning with sweet pastries. From berries are prepared juices, compotes and fruit drinks, as well as delicious liqueurs. A traditional winter drink is a warming “glogg”. Its recipe includes red wine, orange peelings, honey, almond chips and spices. Beer is also very popular, and is brewed independently in many houses. National cuisine is present in local restaurants, which work from nine in the morning to ten or twelve o’clock in the evening. In most establishments, there is a children’s menu. You can make payments with a bank card practically everywhere. Smoking in the common halls of cafes and restaurants is prohibited; there are separate rooms for smokers. Tipping is neither required nor expected. However, a service charge may be included in the bill.

This article about national cuisine of Finland is protected by the copyright law. You can re-use the content, but only under the condition of placement of an active link to www.orangesmile.com.
Finland guide chapters 1 2 3 4 5 6 7 8 9 10 11 12

Cuisine and restaurants in popular cities of Finland

Helsinki
Salmon is one of the most popular dishes, which is offered to guests in any restaurant dedicated to Finnish cuisine. The dish is usually served with aromatic sauces and fresh vegetables. You can also find some Lappish dishes in the list of meals representing the national cuisine. Here venison remains a confident leader. This is one of major specialties, which can be tried only in elite restaurants. Finnish bread, which is baked for centuries according to a special recipe, deserves a special … Read more

Tampere
In the heart of the city there is the popular Astor restaurant serving European cuisine. Every day regular customers come here to re- enjoy delicious meat dishes, taste original hot salads and just spend time in a romantic ambience. In warmer months, visitors may dine on a beautiful terrace. The legendary Alsace restaurant is the only country's dining place that specializes in classic Alsace cuisine. It serves traditional sauerkraut and flamenkuche as well as popular dishes of seafood; one of … Read more

Oulu
Among the peculiarities of regional cuisine is the minimal thermal treatment of products. Many types of meat are usually slightly fried and served bloody. Almost no spices are added - the most common seasonings are salt and ground black pepper. Tourists are often advised to start acquaintance with traditional gastronomy with walking down the Market Square. The very first market was founded here back in the early 18th century. Nowadays, the most popular regional delicacies are sold at … Read more

Lahti
They probably would be interested in trying Mustamakkara blood sausage, for the preparation of which they use pork blood and lard. The dish looks quite peculiar, it's customary to serve such sausages with various berry sauces. Sausages have a rich black color and a truly unique taste. Those who are not yet ready for such culinary experiments will like traditional meat pies more. In addition to minced meat, they may contain various types of sausages and hams. The pies are very satisfying and … Read more