Sightseeing in Tampere - what to see. Complete travel guide

In terms of popularity Tampere occupies the second place and loses to only one resort of Finland - Helsinki. The choice of attractions and tour itineraries here is no less diversified as in the capital.
Advices to travellers: what you should know while being in Tampere
1. Travelers arriving Tampere for the first time are sure to visit the VisitTampere tourist center, which is located in the train station. Here you can take a map of the city and tourist …

Open
Besides the fact this city is relatively young, there is a large choice of historical monuments and architectural attractions here. The central square of the city is the location of a magnificent Cathedral, which was built in 1907. The building looks more like a luxurious palace. Art connoisseurs will surely recognize the unrivaled style of romanticism, which is typical for the majority of buildings of the early 20th century. Another important religious landmark is church of St. Alexander Nevsky and St. Nicholas. The construction of the church took place in 1966.
Among the modern buildings we should definitely mention a concert hall called "Palace of Tampere". Opened in 1990, this place is considered one of the best palaces in Scandinavia. Major conferences and exhibitions, theater performances and performances of chamber orchestra take place here literally every day. Copyright www.orangesmile.com
Cuisine of Tampere for gourmet with top restaurants and cafe
Tampere is a city with an abundance of dining places. Almost every local restaurant has an interesting legend and is ready to surprise its visitors not only with lots of branded treats, but …

Open
Museum of espionage is surely one of the most unusual institutions of the country. Actually, this is a complex of approximately two dozen of small museums. The subjects of these small museums are very diverse - there are halls dedicated to art, Museum of Boxing, Museum of Pharmacy, Car Museum, and Museum of Hockey. Vacationers with children should definitely visit Museum of Dolls and Costumes. Here children will immediately recognize their favorite fairytale characters. Tampere offers a great choice of entertainments for those tourists, who adore beautiful nature. Särkänniemi is considered the most popular is recreation park of this region. Eden Water Park is located not far away. Here you can also visit the only Dolphinarium in Finland. Finally, people, who enjoy watching stars, will find much interesting in the Planetarium. 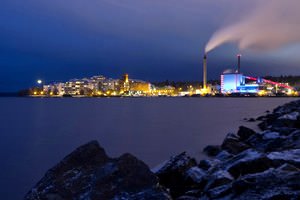 A visit to the Tower of Näsinneula is going to turn out an exciting event. It is directed up on 168 meters and is one of the highest in Scandinavia. You can see a fantastic panorama of the city streets and nearby lakes from the tower's observation deck. Lovers of romantic getaway have an opportunity to visit a rotating restaurant located on the top of the tower. It is considered one of the most prestigious in the city.
Authentic traditions, festivals and lifestyle of Tampere inhabitants
Talking about cultural traditions of Tampere we have to mention the Week of Flowers. This beautiful summer festival over the years has enriched with lots of distinctive features and amazing …

Open
The most interesting cultural object is the ancient stables of Tallipichus. The stables are the oldest structures that managed to survive in the city. Nowadays, they are redesigned to a wonderful cultural center and include some craft workshops, where visitors can participate in exciting master classes and purchase souvenirs. Guests are offered to take a horse-drawn carriage trip and admire city sights. 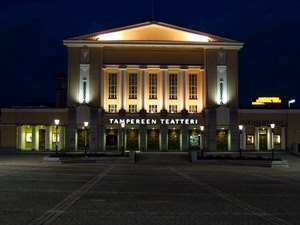 Among the outstanding architectural monuments, the building of the Town Hall is allocated. It is a vivid example of the neo-renaissance style, built in 1890. The Hall itself and the square in front of it are a permanent venue for important social events. The most interesting events take place here on national holidays. On the outskirts of the city is found a beautiful Nyasilinna palace. It is considered the most beautiful architectural monument in the Neo-Baroque style. The palace was built in 1898 by one of the wealthy local businessmen and was privately owned until 1908. Later, a regional museum was opened there. It operated until 1998. Shortly after the museum was closed, the luxurious palace has been neglected for several years. Only after a while, they decided to open a branch of the Hermitage, located in St. Petersburg. Now visitors have an opportunity to admire unique works of art. Excellent temporary exhibitions of contemporary artists are often held there.
Excursion over cultural sights of Tampere - 'must visit' points of interest
The main cultural symbol of the city is the Tampere Cathedral. The construction of religious buildings was started in 1902 and lasted a little more than five years. The majestic and stately …

Open
The Kalev Church can be called the city's most unusual religious monument. It actually resembles a modern cultural center or a hotel, rather than a church. This spectacular Art Nouveau building was constructed in 1964. The church is notable not only for its modern appearance but for its interior design. The most comfortable time to visit it is a middle of a sunny day. An unusual play of light and shadows is formed in its hall due to the windows of the original form.

This guide to iconic landmarks and sights of Tampere is protected by the copyright law. You can re-publish this content with mandatory attribution: direct and active hyperlink to www.orangesmile.com.
Tampere - guide chapters 1 2 3 4 5 6

City tours, excursions and tickets in Tampere and surroundings

Survived castles around Tampere
♥   Castle 'Häme Castle' , 67 km from the center. On the map

National and city parks around Tampere
♥   National Park 'Seitsemisen kansallispuisto' , 52 km from the center. On the map

♥   National Park 'Helvetinjärven kansallispuisto' , 58.4 km from the center. On the map

♥   National Park 'Isojärven kansallispuisto' , 69.5 km from the center. On the map

♥   National Park 'Torronsuon kansallispuisto' , 85.7 km from the center. On the map

Sights around Tampere from our guide 'Extreme places on Earth' 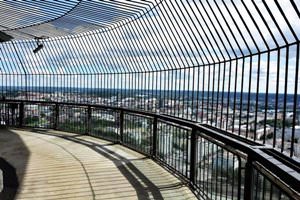 Distance from Tampere center - 0.7 km.
Besides the observation deck, there is an excellent restaurant on the top floor, where you can taste the wonderful local dishes and enjoy the opening enormous panorama at the same time. It is important to note that this restaurant is very popular among visitors with children. Besides common dishes its menu features a huge selection of ice cream. The history of the construction of the tower is very amazing; it took only 33 days to build a structure. The builders worked around the clock, every day increasing the height of the tower for 4 meters. The initiator of the construction of the tower was Mayor Erkki Lindfors. An amusement park was opened next to this iconic landmark quite recently. … Read further

Search touristic sites on the map of Tampere

Sightseeing in regions nearby Tampere

Lahti
During your stay in Lahti you can visit the sports center that is equipped with several ski jumps, an ice palace, ski routes, the museum of ski sport and pedestrian zones. If you arrive to Lahti during summer, you can also visit the city’s ski jumps as the tallest one has an observation area with stunning panoramic views of the city. Among the most notable architectural ... Open »
Turku
Turku is also the birthplace of the famous musician and composer Jean Sibelius. One of the museums of the city was named in his honor. In this museum you can see a collection of antique musical instruments, which total number is slightly less than four hundreds. The city’s downtown is also very interesting place. Here are located Old Great Square, which is surrounded by four ... Open »
Espoo
Espoo residents recommend visitors of the city to take advantage of the platform installed on one of the high-rise buildings in the center of Tapiola. Here visitors will be able to admire magnificent landscapes of diverse and remarkably harmonious nature of this country. Among other attractions of this place are Otso Gallery with its rich exhibition, Clocks Museum, and ... Open »
Helsinki
Church Temppeliaukion Kirkko. The church in Temppeliaukion kirkko rock attracts visitors not only by its natural simplicity, but also by an excellent contrast to architecturally pretentious churches and oil paintings overloaded with all kinds of decorations and gold jewelry. Temppeliaukion kirkko emerged in the 60s of the previous century. The construction began with the ... Open »
Tallinn
Alexander Nevsky Cathedral. Alexander Nevsky Cathedral is the biggest and the most beautiful domed cathedral in Tallinn. This luxuriously decorated Orthodox church features a combination of different historical styles. The cathedral was built in 1900 on Toompea Hill during the period when Estonia was ruled by Czarist Russia. Russian architect Mikhail Preobrazhensky, a ... Open »
Savonlinna
Kolovesi National Park is, surely, the most beautiful nature reserve of the region. Rocky cliffs, clear lakes and thick trees make the park unique and unforgettable, so no wonder why there are always so many visitors here. One can learn the history of the city in details in Provincial Museum. The most important religious place of interest of this city is, surely, Kerimäki ... Open »

All about Tampere, Finland - sightseeings, attractions, touristic spots, architecture, history, culture and cuisine. Prepare your trip together with OrangeSmile.com - find out the 'must see' things in Tampere, which places to visit, which excursions to take, where the breathtaking views are waiting for you. Planning your trip with this travel guide will help your to get the most out of Tampere in few days.