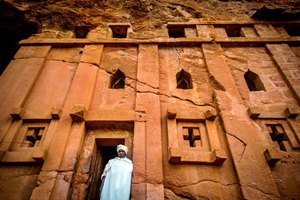 1. Ethiopia is, generally speaking, a safe country, but there are areas that tourists should refrain from visiting or visit them with extreme caution and only together with a guide. This is particularly true about the border with Somali and regions in the south-east of Ethiopia.
2. The country has a relatively low crime level, but there are still swindlers and robbers. The concentration of criminals is higher close to the borders with Sudan and Kenya. Tourists shouldn’t visit these parts of the country after sunset.
3. Ethiopia is a secular country, but local people don’t pay much attention to this fact. Many of them are very religious people. Ethiopian Orthodox Church and Sunni Islam are the dominating religions here, and their rules may be applied to tourists as well.
Ethiopia sightseeing - top places to visit
This country amazes visitors with sunny weather all year round and the atmosphere of celebration. The best way to start exploration of Ethiopia is to …
Read further
4. Homosexuality is not tolerated in Ethiopia, so same-sex couples are better to refrain from any expression of their feelings in public.
5. That being said, heterosexual couples should also not kiss or hug each other when they are on the street or in a café.
6. In order to protect yourself from potential problems, never tell openly what you think about local customs, traditions, and beliefs no matter how savage and immoral they might look to you. Ethiopians consider their beliefs true and correct, so there can be no critics and discussions.
7. By the way, Ethiopia has never been a colony of any western country, and so local people do not hold a grudge against Europeans or Americans. If you do not insult them or show your superiority, local people will be friendly and cheerful with you. Copyright www.orangesmile.com
8. Tourists must be very careful when they choose food because unsanitary conditions and wrong storage methods are typical for the country.
9. Never drink tap water, and always stock up on bottled water. This rule concerns tooth cleaning too.
10. Tourists should leave tips in large hotel chains and popular cafes. A reward of 10% of the total is enough. Tips are not mandatory in small cafes, but waiters will always be happy to get some extra money.
11. It is always a good idea to make vaccines against malaria and yellow fever before a vacation in Ethiopia. Don’t forget that AIDS is very widespread in the country.
Things to do in Ethiopia - active leisure
Ethiopia offers a broad range of entertainments for any taste. For example, tourists may like a unique opportunity of looking at the country from a …
Read further
12. Tourists are better to exchange money beforehand while they are still in a big city. There can be no money exchanges in small cities.
13. It is a good idea to get not only banknotes in high denominations but also coins. Many shops and cafes can have no change.
14. It is almost impossible to pay with a bank card.
15. Bargaining is allowed not only in souvenir shops but also in markets and taxis.

This collection of travel tips for Ethiopia is protected by the copyright law. You can re-use the content, but only under the condition of placement of an active link to www.orangesmile.com.
Ethiopia guide chapters 1 2 3 4 5 6 7 8 9 10 11

Colorful and unique places in Ethiopia 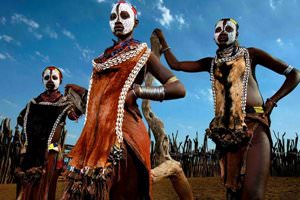 The Karo tribe is the smallest tribe in South Ethiopia that resides along the banks of the Omo River. Difficult living conditions has led to a serious reduction in the number of the tribe. Now their number is around 1000. As well as many original tribes the Karo are distinguished by their manner to decorate their faces and bodies using white chalk and red ochre. The men paint themselves brighter than the women to look more attractive and courageous.

The Karo raise livestock, the men can also spend much time hunting. Women, for their part, handle domestic chores. Their activities also include currying. Some of the tribal men work in nearby towns, that is why they can’t be considered socially isolated. The Karo are absolutely friendly to European guests. The tribesmen are happy to accept … Read all 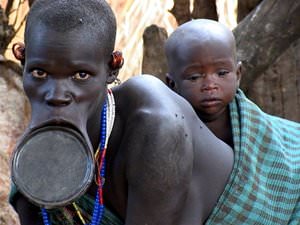 The only objective of such a tradition is to become the most outwardly different from ordinary people with whom the Suri wish to have nothing to do. For many hundreds of years the Surma people raise cattle. They are extremly unlikely to contact outsiders and only 40 years ago were completely isolated from the rest of the world. Russian physicians were the first to establish contact with the isolated tribe. They left the Surma men some Kalashnikov rifles – a … Read all 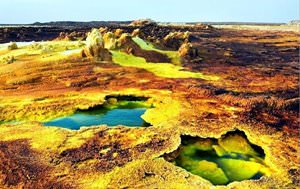 One of the most interesting attractions of Ethiopia is the town of Dallol. Today it’s uninhabited, but 50 years ago there was a large settlement; its inhabitants have been developing ore deposits found nearby. Dallol also has an extremely hot and dry climate. Active monitoring of temperature changes were held there from 1960 to 1966. During this time, it was found that the average annual temperature in the town is 34.4°C.

At first glance, this temperature seems to be quite low, but it should be emphasized that scientists have calculated the average. For months, temperature in Dallol can be above 38°C, whereas there is no exact difference between winter and summer time. Despite the fact that today the mining village is in ruins, it never ceases to attract tourists.

This ghost … Read all
All unique sightseeing Ethiopia

Advices for popular cities of Ethiopia

Addis Ababa
1. In public places, any manifestation of feelings between a man and a woman is forbidden. Even legitimate spouses should not walk around the city hand in hand. 2. The issues of lifestyle and religion are not discussed, any manifestation of negligence towards local traditions can greatly offend local people. 3. Vacationers are advised to avoid experimenting with local exotic dishes. When it comes to drinking, the best choice would be ordinary mineral water, while tap water cannot be used … Read more