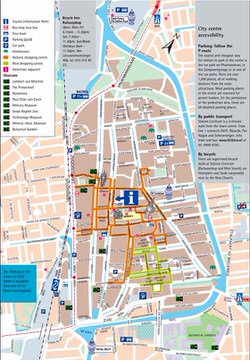 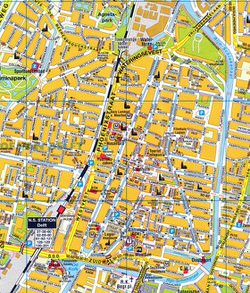 Interactive maps of hiking and biking routes around Delft

1. You can zoom in/out using your mouse wheel, as well as move the map of Delft with your mouse.
2. This interactive map presents two modes: 'Biking Routes' and 'Hiking Routes'. Use the '+' button on the map to switch between them.

This Delft map has two modes: 'Railway Network' and 'Landscape & Rural Map'. Use the '+' button on the map to navigate.

Our guide to Delft

The Prisenhof. Primordially the Prisenhof was St Agatha's Cathedral. It was built in the 15th century in the late gothic style, but a century later some outhouses were created. First of all, the Prisenhof is famous for the fact that there was killed William of Orange. On the landing one can see the holes from the bullets. That's why after the restoration the Prisenhof serves as the National … Open

Without a doubt, there are high-class hotels in Delft, a stay at which will please even the most discerning travelers. Not far from the city center you will find a unique eco-friendly hotel, WestCord Hotel Delft, which has a private adjusting territory with a garden. At this hotel, travelers will find spacious studios, furnished with exclusive branded furniture and decorated with modern artworks. The adjusting … Open

Delft for children - what to visit

Escape quests, which have become quite popular in recent years, are sought after in Delft as well. A visit to such a quest room will be interesting for travelers with school kids. Escape Challenge is considered one of the most popular rooms of such type. During a stay there, visitors will have to solve many complicated puzzles. How to open a safe, find an exit out of a room and discover thoroughly hidden items – … Open

A stylish hotel, Shanghai Hotel Holland will amaze visitors with its modern architecture. The façade of the creative building is completely made of glass, so it lets much daylight in, making halls of the hotel look even more spacious. Elegant interiors of Shanghai Hotel Holland feature distinct influences of Chinese style – beautiful carved panels and paintings with oriental patterns. Spacious rooms of the hotel … Open

Earthenware are considered the most popular souvenirs of Delft. Even today, several historic factories run in the city. Local souvenirs and blue and white cutlery should be looked for in a specialized Royal Delftinery store. Visitors are offered only genuine products from local factories. The goods presented here is distinguished by rather high prices. However, for those who like to decorate their tables with … Open

Hotels with history of Delft

Hotel Johannes Vermeer Delft remains one of the most famous and interesting historic hotels in Delft. It is located in the heart of the city, where the hotel occupies a beautiful old building that was previously a tobacco factory. Designers of the historic hotel tried to keep the original architecture of the building as much as possible and added beautiful antique furniture and items to create a unique style. … Open