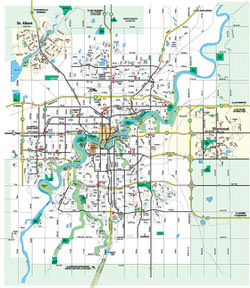 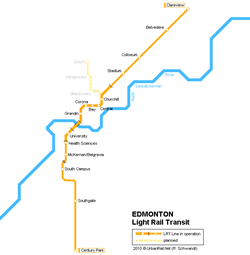 Interactive maps of hiking and biking routes around Edmonton

1. You can zoom in/out using your mouse wheel, as well as move the map of Edmonton with your mouse.
2. This interactive map presents two modes: 'Biking Routes' and 'Hiking Routes'. Use the '+' button on the map to switch between them.

This Edmonton map has two modes: 'Railway Network' and 'Landscape & Rural Map'. Use the '+' button on the map to navigate.

In the north-west area, 22 kilometers from the city of Toronto, is situated the largest and most popular airport in Pearson. You can get to Toronto by electric trains, taxis, limousines, and express buses (the advantage of this option is that the passenger is conveyed to the designated point in half an hour). In the waiting room of the departure area, passengers can go shopping and buy everything they need, including souvenirs, have a snack in a cafe, charge their gadgets, and use the free Internet at the airport. Pearson Airport accepts both domestic and international flights. Passengers check-in as well as baggage check-in begins two hours before the flight and ends forty minutes before the flight. With regards to documents for registration, you need a passport and a ticket. You can also purchase an e-ticket, and all you will need to do that is your passport. … Open

Vuntut National Park is located in Yukon, on the border with Alaska. The name of the park means "among the lakes". On its territory there are hundreds of lakes of different sizes. The fauna is represented by reindeer caribou on which hunting has always been conducted on the territory of the park, as well as bears, wolverines, lynxes, mink, foxes, and martens. In Nahanni National Park, located in the Mackenzie Mountains, there is another well-known waterfall of the country - Virginia. Its height is 90 meters, almost twice as high as that of Niagara Falls. The park occupies the canyons of the South Nahanni River, from which incredibly picturesque views are opened. The park has become a habitat for approximately 500 grizzly bears under the protection of the state. … Open

Our guide to Edmonton

The cultural and ethnic diversity of the city has become the main spiritual wealth of this place. It is carefully and successfully preserved until our days. That unique lifestyle of the city, the opportunity to get acquainted with ethnic origins of Canada's culture, unique beauty, and close proximity to the Rocky Mountains attract many tourists to this wonderful city. The unusual atmosphere of Edmonton will be of … Open

One of the most amazing tour facilities is the Fort Edmonton Park. This is a unique living history museum that tells visitors about important historical events and everyday local life. There are several unique architectural monuments in Edmonton; Alberta Legislature is considered the most beautiful of them. Currently, this historic building is fully placed at the disposal of tourists; in summer, you can visit a … Open

Among the golf centers Rundle Park and the Northern Bear are worth noting. They are famous because of high quality of courses and high-class coaches. In just a few lessons beginners can learn the basics of the game and enjoy their new hobby. In the city there is a huge amount of entertainment places, where you can relax as a family. These include ultra-modern cinema The Princess Theatre and the popular World … Open

Japanese restaurants are common in Edmonton; one of the best among them is Sakura Japanese. Such a selection of sushi and rolls will certainly inspire fans of Japanese cuisine; the restaurant also features the pleasant atmosphere. Those who prefer to tame the hunger with simpler and more familiar dishes are recommended to taste pancakes in Crepeworks. It's a great place where the whole family can relax after … Open

As any large-scale festival, The Edmonton International Fringe isn’t complete without an abundance of treats and colorful fairs. During the festival, city streets house a tremendous amount of attractive stores and retail shops where you can buy refreshments in addition to interesting crafts and souvenirs. Fans of modern art are recommended to visit Edmonton during the Whyte Ave Artwalk, which is attended by … Open

Admirers of historical attractions will be definitely impressed by the Alberta Legislature Building. Since its construction, it has been used for hold meetings of the Legislative Assembly. This luxurious building was built in 1913. Its exterior combines the inimitable elements in Egyptian, Greek and Roman styles. Every day, exciting excursions, during which you can sink into an atmosphere of its halls, are given … Open