Sightseeing in Pecs - what to see. Complete travel guide 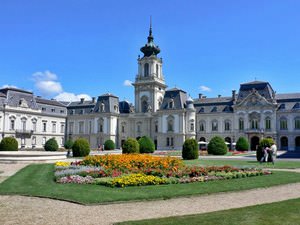 Some places in the world are very hard to abandon. You want to visit them again and again. The enchanting city of Pecs in Hungary is one of such settlements. There is a tradition of throwing a coin in the fountain or touching a sculpture before leaving in order to return to the place that you like again. In Pecs, this tradition is slightly different – tourists hang locks and throw the keys as far as they can so no one can find them. There is a simple explanation for such an appeal to this Hungarian city. Pecs is an old city with a rich heritage and numerous architectural landmarks.
This Hungarian city was founded approximately two thousand years ago. However, archaeological excavations prove that there was a Celtic settlement on this site long before our age. The city had another name during the Roman period – Sopianae. When the Roman Empire fell, barbaric tribes and then the Avars invaded the region. Starting from the 11th century, Pecs turned into one of the leading Hungarian centers and a bishop’s residence. In 1526, during the Battle of Mohács, the Turkish army captured and plundered the city. Seventeen years later, the Ottomans became the new rulers in Pecs. All churches in the city were transformed into mosques.
Pecs was finally liberated from the Turkish rule in 1686. Soon after that, the city joined the Habsburg Empire. This is when Slavs and Germans started settling in the area. The Serbian Army captured Pecs during World War I. The decade after the end of World War I was crucial for the destiny of the whole country. The status of the city was questionable for a long time but Pecs remained a Hungarian territory in the end. World War II didn’t inflict any sufficient damage to Pecs. That is why the city started developing actively and growing in size as soon as the war ended. Copyright www.orangesmile.com
Pecs Cathedral or officially the Sts. Peter and Paul's Cathedral Basilica is the signature landmark of the Hungarian city. The first chapel on this site was built yet at the end of the fourth century. Later, the modest chapel was rebuilt into an early Christian cathedral. The Romanesque cathedral was built in 1064 after the fire had destroyed the former church. The Sts. Peter and Paul's Cathedral Basilica changed its look significantly during the Middle Ages because it was decided to add two sixty-meter-tall towers. Later, a Gothic chapel appeared during one of the renovations. The Turkish occupation that started in 1543 and lasted almost one hundred and fifty years harmed the cathedral’s condition. 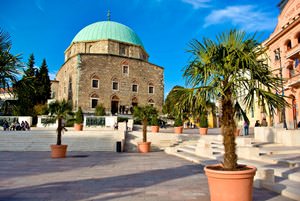 A large-scale restoration of the sacred building started at the beginning of the 19th century. The cathedral slightly changed its look as the central façade got neoclassic details. When looking at this part of the shrine, it feels like it is going straight into the sky. Twelve statues of apostles installed above the façade decorate the cathedral. Nowadays, the total length of the Sts. Peter and Paul's Cathedral Basilica is roughly seventy meters, and its width is twenty meters. The inner décor of the church is still in the post-Romanesque style, and the cathedral’s layout is medieval.
Tourists with children are always interested in visiting attractions suitable for kids. In August 1962, a narrow-gauge railway opened in Pecs. Nowadays, this railway is also famous as the Children’s Railway. Local workers decided to build the railroad to offer free entertainment for local children and kids of the city’s guests. This is a great way to explore the local nature. The length of the narrow-gauge railway is only six hundred meters. This is the shortest railway in Hungary. Nevertheless, the railway works all year round, offering an interesting journey to small visitors. Needless to say, children adore taking a short ride from the zoo to the amusement park on the small train. 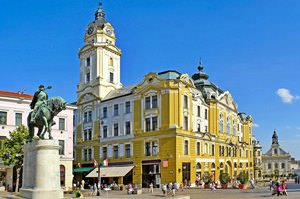 Every spring and autumn, a festival dedicated to young workers of the railroad takes place in Pecs. This is the best time to try different amusements for free, watch interesting theatrical shows by local actors, and attend performances of not only experienced but also beginner actors. During the event, a small camp for the railroad workers opens in the city park. Children are welcome to not only relax here but also learn more about the railways and their functioning. Participants have a wonderful opportunity to find out the secrets of this profession and even try to become a train operator.
To get to Pecs in the most comfortable way, consider reaching Budapest first. The capital of Hungary has a large international airport with frequent flights to many countries of the world. There are daily buses to Pecs directly from the airport. The slowest bus reaches Pecs in four hours, and the rest arrive in the destination city in just three hours. At the airport, tourists can always rent a car for the period of their vacation in Hungary or use the taxi.
This guide to iconic landmarks and sights of Pecs is protected by the copyright law. You can re-publish this content with mandatory attribution: direct and active hyperlink to www.orangesmile.com.

City tours, excursions and tickets in Pecs and surroundings

Survived castles around Pecs
♥   Castle 'Siklós Castle' , 25 km from the center. On the map

National and city parks around Pecs
♥   Forest Park 'Jankovac' , 74.4 km from the center. On the map

In Hungary, tourists will find a great choice of historic, architectural and nature landmarks. Old cities of the country are home to numerous interesting places, museums and exhibitions. Suburbs and rural areas are no less interesting as there are many nature parks and reserves that never cease to amaze travellers. … Open

Search touristic sites on the map of Pecs

Sightseeing in regions nearby Pecs

Osijek
This town is located near Zagreb; it is a major economic center, which, besides all other attractions, is famous for its beauty and iconic places. Osijek is conditionally divided into three parts: Upper and Lower town, and the fortress Tvrda. The Upper City will be the most interesting for tourists because all main attractions, popular shopping centers and restaurants are ... Open »
Kecskemet
Step inside the Szent Miklos Church to see its interesting décor. The gorgeous main altar is recognized as the main attraction of the shrine’s inner décor. More than ten artists worked hard to create such a masterpiece. If you come closer to the altar, you will notice numerous scenes from the Bible and images of the saints. There are many gilded elements of décor. A big ... Open »
Novi Sad
The Serbian city with a poetic name – Novi Sad – is truly a place where happiness lives. The region fills the heart with joy and paints lives in new, brighter colors. Perhaps, this is the most beautiful and picturesque city in the country. In summer, when the city hosts a popular music festival, music lingers on the streets of Novi Sad, making it even more charming and ... Open »
Banja Luka
Banja Luka is a capital of Republika Srpska and a city with long and rich history. Banja Luka has never been considered a popular tourist destination as this is a large industrial center, but the city has become very popular recently. The reasons for that lay in mild climate and picturesque nature. The capital is unmatched with any other city in the region in terms of the ... Open »
Velika Gorica
Velika Gorica was founded in 1278. This is a small cozy town with interesting history. It is rich in sights and cultural values. During the times of Independence war the city has been severely damaged and many buildings and monuments have been destroyed. Today several monuments remind of those tough times and the city tries to remember any evidence of its rich history. Large ... Open »
Zagreb
Zagreb is a capital of Croatia and an important economic and scientific center. Travellers call Zagreb “the city of museums”. Indeed, the number of cultural sights and exhibitions centers is really stunning. Moreover, the majority of them are unique on the country scale. For convenience the city is divided into three regions. Gornji grad is considered the historical ... Open »

All about Pecs, Hungary - sightseeings, attractions, touristic spots, architecture, history, culture and cuisine. Prepare your trip together with OrangeSmile.com - find out the 'must see' things in Pecs, which places to visit, which excursions to take, where the breathtaking views are waiting for you. Planning your trip with this travel guide will help your to get the most out of Pecs in few days.