Sightseeing in Gyor - what to see. Complete travel guide 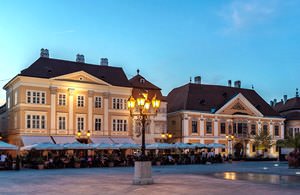 Among Hungarian cities with a big number of developed industries and modern factories, Gyor occupies the third place. Besides that, tourism has been actively developing in the city. Thanks to the rich cultural and historical heritage, this Hungarian city is widely famous among numerous tourists. Gyor is often referred to as the “river city” because it is situated on the bank of the River Rab. When visiting this beautiful Hungarian city, many tourists prefer to make a river excursion in a boat or canoe. Such activities as fishing and picnicking outdoors are also always available to guests of Gyor.
Celts lived in the territory of modern Gyor in the 5th century BC. The settlement started growing in size and getting first fortifications during the Roman Empire period. At that time, Gyor had another name and was famous as Arrabona. The Romans were successfully protecting the city from barbaric invasions. However, when the Roman Empire ceased to exist, the fortress became abandoned. Avars captured the territory in the 5th century. However, Charlemagne and his powerful army defeated the invaders at the beginning of the 9th century. Consequently, Francs remained rulers in Arrabona until the end of this period. That being said, their reign didn’t last long and Hungarians drove Francs away already at the beginning of the 10th century. A new period started in the city.
Hungarians restored the destroyed Roman fortress. The city itself started growing in size. King Saint Stephen opened episcopate in the city and changed its name to Gyor. The Hungarian city reached the peak in its development in the 18th century. It became a free royal territory. The war with Napoleon was a tough challenge for Gyor as a severe battle took place near the city walls. The Austrian army lost the battle. World War II also had a negative impact on the city’s fate as many historic buildings were severely damaged. Thanks to the efforts of the city’s authorities, it became possible to restore these architectural treasures. Copyright www.orangesmile.com
Are you interested in sacred places? In this case, consider visiting the Benedictine Pannonhalma Archabbey that is the oldest monastery in Hungary. Starting from its building in the 10th century and until the modern days, education was the main purpose of the abbey. The Pannonhalma Archabbey was rebuilt a number of times during its long history, and each restoration brought new elements and features to the building. Nowadays, the abbey is an elegant combination of Romanesque, Gothic, Renaissance, and Baroque styles. 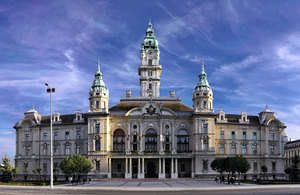 A basilica has been open in the monastery’s territory starting from the XIII century. This basilica is dedicated to Saint Martin. The beautiful building attracts numerous guests with its rich and exquisite décor. Skillfully made frescos cover the ceiling of the shrine, and beautiful stonework and gilded altar make this basilica even more attractive. The abbey is also proud of its library that features more than three hundred thousand books including hand-printed materials, ancient manuscripts, and historic documents that do not have any copies.
When taking a stroll in the historic center of Gyor, attentive tourists might see a hard-to-notice building with the oldest pharmacy. Nowadays, there is a museum open in it. In the past, this building belonged to a Jesuit monastery. It was an idea of Jesuit monks to open a pharmacy here in the 50s of the 17th century. The pharmacy was open for fifty years but then it closed permanently. It was decided to reopen a pharmacy in this building only in the 70s of the 20th century. 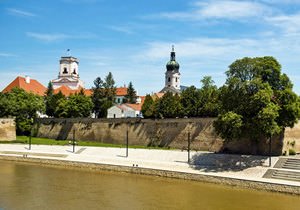 Nowadays, the pharmacy has become a popular tourist landmark. Guests from all over the world visit this place in order to take a look at the unique décor of the pharmacy that makes it reminiscent of a palace. Pay your attention at the stucco on the ceiling, original patterns, beautiful arcs, and skillfully made paintings. The gorgeous design is not the only thing that deserves the attention of visitors. There are also many valuables exhibited such as old medical tools.
Thousands of tourists try to see the Mary’s Column that is one more notable landmark in Gyor. The popular landmark is located in Szechenyi Square. This is a popular landmark that dates back to 1686. Stone fruit and intricate bas-reliefs decorate the gorgeous column. Several saints surround the column – John the Baptist, Saint Anthony of Padua, Stephan, and Leopold. On the top of the tower, there is Virgin Mary holding her baby. She looks like she is showing people that the whole city is under divine protection. 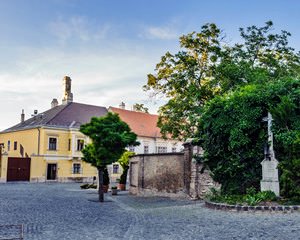 It is possible to get to Gyor by train departing from the capital’s central railway station in just one hour. If you choose to travel to this Hungarian city from Vienna, the road will take one and a half hours. It is also possible to arrive in Gyor by train from Bratislava. Finally, there are intercity buses to Gyor. The most suitable bus route starts in Budapest.
This guide to iconic landmarks and sights of Gyor is protected by the copyright law. You can re-publish this content with mandatory attribution: direct and active hyperlink to www.orangesmile.com.

City tours, excursions and tickets in Gyor and surroundings

Survived castles around Gyor
♥   Castle 'Komárno Fortress' , 37 km from the center. On the map

National and city parks around Gyor
♥   National Park 'Fertő-Hansági' , 62.6 km from the center. On the map

Nadudvar is a famous town known as a centre of pottery in Hungary. During more than two hundred years best pottery in the country is made in Nadudvar. Local craftsmen never cease to amaze travellers with their skilful and beautiful artworks. The most precious items were transferred to large galleries and art museums across Hungary. … Open

Search touristic sites on the map of Gyor

Sightseeing in regions nearby Gyor

Bratislava
This majestic castle was built yet in the 10th century. Its towers have several observation areas where you can enjoy the panoramic views of the city. If the weather is clear, you can even see Hungarian lands. The Gates of Saint Michael is one of the oldest buildings in the city. The gates were built in 1300. Later, in 1758, they were fully renovated and this changed their ... Open »
Esztergom
The building has a cross shape with features typical for neoclassicism. The main, façade side of the basilica is decorated with a massive Corinthian portico and eight big columns. If you step inside, you will notice various frescos, mosaics, numerous marble columns, and giant statues. All these beautiful elements are located in an area of more than 50,000 square meters. ... Open »
Budapest
Castle Hill. Castle Hill with its fabulous castle on the top is one of the factors why Budapest is considered one of the most beautiful cities in Europe. Castle Hill is the location of the Castle District that is home to numerous ancient monuments, different museums and narrow streets. This is one of the main attractions of Budapest. Visitors will easily get to the top of the ... Open »
Vienna
Without a doubt, these are not all notable places of Vienna. With time, Vienna was turned into a fashionable city with a large number of leisure and entertainment facilities, which are mostly located near Ringstrasse and on the banks of the Danube River. In order to explore the city in a more relaxing way, one can hire a bicycle. In this case, do not forget to visit Prater ... Open »
Trencin
A strong fire and war destroyed the majority of the city’s historical monuments. However, a few of them have survived, and today thousands of travelers come to Trencin to admire its beauty. In the center of city lies Mierove nam Square. In 1712 here was installed a monument named Plague Column. This monument is the reminder of the tragic events of the early 18th century, ... Open »
Kremnica
The castle suffered much damage in a fire in 1560. After that, the mayor of Kremnica moved to another building, and the damaged residence became the town’s archive. The Count Chamber was another important part of the architectural complex. The host was responsible for the mint. The chamber didn’t survive until modern days because it became too ramshackle and was ... Open »

All about Gyor, Hungary - sightseeings, attractions, touristic spots, architecture, history, culture and cuisine. Prepare your trip together with OrangeSmile.com - find out the 'must see' things in Gyor, which places to visit, which excursions to take, where the breathtaking views are waiting for you. Planning your trip with this travel guide will help your to get the most out of Gyor in few days.