Sightseeing in Kecskemet - what to see. Complete travel guide 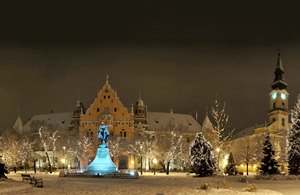 The Hungarian city of Kecskemet is situated in the heart of the Hungarian Valley. This settlement has become internationally acclaimed because of its maiolica, various ornaments, and apricot vodka. Tourists from all over the world come here to see attractive buildings of the 19th and 20th centuries, visit an interesting museum of naive art, admire exhibits in the museum of photography, and walk in the arboretum at the outskirts of the city.
In the past, there was an ancient settlement on the site of modern Kecskemet. Mongols invaded Hungarian lands in the 13th century and completely defeated local people. Despite big losses and much damage, the settlement recovered quickly. A beneficial location at the crossing of trading routes helped the town. At the end of the 40s of the 14th century, King Louis I of Hungary officially gave Kecskemet a town status.
At the edge of the 16th-17th centuries, the Ottomans were rulers in the region. As Kecskemet paid taxes directly to the pasha in Buda, the town enjoyed a special status and no one had a right to plunder and damage it. Cattle breeding became very popular in the neighborhoods of Kecskemet in the 18th century. However, gardening and vine-growing became the major occupations of local people a century later. Kecskemet was getting richer, turning into the main center of trade in the region at the end of the 19th century. World War II didn’t bring many disasters to the city, and so many new factories appeared in Kecskemet soon after the war had ended. Copyright www.orangesmile.com
The City Hall is usually the first landmark that tourists visit in this city. It took four years to build. The construction started in 1893. The gorgeous building is a wonderful example of the Secession architectural style. The landmark underwent extensive restoration in 1911 after a devastating earthquake that had damaged many buildings in Kecskemet. 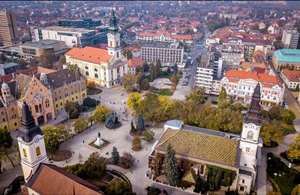 The fundamental part of the City Hall features classy traits of Renaissance architecture. An interesting ceramic décor adorns the façade of the building. The old clock on the front side of the building is, perhaps, the most eye-catching element of the City Hall. Why is the clock so popular? First of all, the clock is decorated with several bells that make a pleasant sound when the wind is blowing. Second, this is, actually, a musical clock. The clock plays different melodies every hour. As a rule, these are the national songs of Kecskemet or a beautiful melody by Hungarian composer Zoltán Kodály.
The central city square, which is named after legendary Kossuth Lajos, is also not deprived of landmarks. Tourists can visit the Szent Miklos Church here. This is a Catholic church, the first mentions of which date back to the 70s of the 15th century. The church changed its look a number of times over the years, so now it looks quite different from the original gothic design. Only an elegant and simple looking façade reminds of the original architectural style of the landmark. With time, the church got more Baroque elements. The Szent Miklos Church was expanded at the end of the 40s of the 17th century and got a new chapel tower and an adjacent hall. 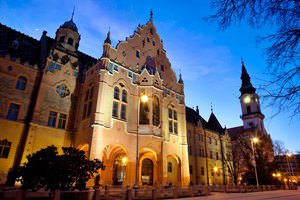 Step inside the Szent Miklos Church to see its interesting décor. The gorgeous main altar is recognized as the main attraction of the shrine’s inner décor. More than ten artists worked hard to create such a masterpiece. If you come closer to the altar, you will notice numerous scenes from the Bible and images of the saints. There are many gilded elements of décor. A big loge is another eye-catching element in the church. In the past, this loge belonged to the emperor and his family.
When taking a stroll in Kecskemet, it is hard to fail to notice the Cifrapalota Palace. This is a true masterpiece of Hungarian modern. Built at the beginning of the 20th century, the palace has a gorgeous façade with floral motifs. Nowadays, a picture gallery is open in his architectural landmark. It exhibits works of notable Hungarian painters. 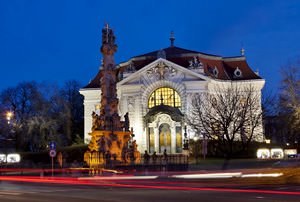 There are three exhibitions in total. The first one is dedicated to works of such painters as Odon Marffy, Mihály Munkácsy, and Bertalan Székely. There are eighty-one paintings in this exhibition. The second one features works by Mednyánszky, Egri, and Anna. Finally, the third exhibition is dedicated to the masterpieces of talented painter Menyhért Tóth.
It is easy to get to Kecskemet by train that goes from Budapest to Szeged. The ride lasts approximately one hour. There are also daily buses that connect Kecskemet with other parts of the country. A bus ride is almost as fast as a train one. Needless to say, taxi drivers are always ready to get you to the right destination. This is the fastest but also the most expensive way to reach the city.
This guide to iconic landmarks and sights of Kecskemet is protected by the copyright law. You can re-publish this content with mandatory attribution: direct and active hyperlink to www.orangesmile.com.

City tours, excursions and tickets in Kecskemet and surroundings

Survived castles around Kecskemet
♥   Castle 'Buda Castle Budapest' , 82.8 km from the center. On the map

National and city parks around Kecskemet
♥   National Park 'Kiskunsági' , 38.2 km from the center. On the map

The village of Vijoi is an interesting historic and religious destination in Hungary. One of churches in the village exhibits a priceless artefact. This is the first printed Bible that was published by one of local typographies. When it comes to describing nature landmarks of the country, we ought to start from Bugac Nature Park, which total square exceeds 11 thousand hectares. Every day interesting shows and performances take place in the park to entertain numerous visitors. There are also several rides and taverns decorated in retro style. … Open

Search touristic sites on the map of Kecskemet

Sightseeing in regions nearby Kecskemet

Budapest
Budapest, the capital of Hungary, is often called 'the pearl of the Danube'. The Danube flows through the city and divides it into two parts. The bridge, which connects Buda and Pest, was built only in the 19th century. This fact has given Budapest is modern name. Nowadays, this is a marvellous city with numerous historical buildings, beautiful squares, cozy parks and ... Open »
Esztergom
Szechenyi Square is one of the major landmarks in Esztergom. There are many historic buildings that are worth seeing around the square. All the buildings are old and are great examples of the Baroque and Rococo architectural styles. That being said, the gorgeous fountain in the middle of the square is its biggest attraction. It is so pleasant to sit near the fountain on a hot ... Open »
Eger
The Marzipan Museum also deserves the attention of tourists. Foreign guests particularly enjoy visiting it. In this venue, visitors can see what Hungarian confectioner Kopcsik Lajos can make from the almond dough. Sculptures, coats of arms, bas-reliefs – visitors will see all these and many other interesting items. It is hard to believe that all these masterpieces are ... Open »
Pecs
This Hungarian city was founded approximately two thousand years ago. However, archaeological excavations prove that there was a Celtic settlement on this site long before our age. The city had another name during the Roman period – Sopianae. When the Roman Empire fell, barbaric tribes and then the Avars invaded the region. Starting from the 11th century, Pecs turned into ... Open »
Miskolc
Do you enjoy visiting theaters while on a holiday? In this case, here is an interesting fact for you – Miskolc has always been a “theatre region”. This city is home to a big State Theater opened in 1856. Nowadays, the theater building is one of the main attractions of Miskolc. Its stages regularly host different interesting plays and performances. Visitors can see both ... Open »
Debrecen
Among the multiple local sights and place of interest we should mention the largest Reformed Church in Hungary and the reformed college organized nearby, Deri Museum (exhibits large collection of ethnographic and archeological items and pictures), the Calvinist Library with stock exceeding 300 thousand books including rare incunabula, and much more. There is a magnificent ... Open »

All about Kecskemet, Hungary - sightseeings, attractions, touristic spots, architecture, history, culture and cuisine. Prepare your trip together with OrangeSmile.com - find out the 'must see' things in Kecskemet, which places to visit, which excursions to take, where the breathtaking views are waiting for you. Planning your trip with this travel guide will help your to get the most out of Kecskemet in few days.