Sightseeing in Belgrade - what to see. Complete travel guide 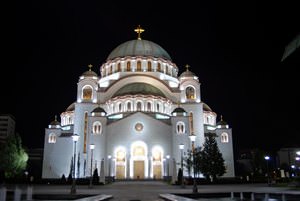 While talking about Belgrade, it’s really worth mentioning its unforgettable culture and rich heritage of historical values. Unforgettable mix of western and eastern traditions makes the atmosphere of the city unusual and mystical, attracting more and more tourists from different parts of the world.
Old hotels keeping the history of Belgrade
Hotel Moskva is a tourist landmark attracting hundreds of travelers every single day. This accommodation place occupies an elegant historic building in Empire style. The atmosphere at the …

Open
Kalamegdan garden is known as one of the most important sights in Belgrade. The garden is located in the old part of the city and is a home for famous Belgrade fort, which is surrounded by rich greenery. This fortress managed to survive in many wars and seizures, but in order to restore it restorers had to rebuild many parts. Today there are several exhibition halls in the fort, here often take place such activities as theatre performances and knight tournaments.
Orthodox Christian visitors should visit the Church of St. Sava, which is known as the second biggest church in the world (the first place is occupied by the Temple of Christ the Savior in Moscow).

In the memory of the great scientists has been opened the museum of Nicolas Tesla. The museum exhibits personal belongings and manuscripts of this outstanding inventor. Here you will find schemes, diagrams and other works of the great scientist. The museum also keeps his library and tiny models of his inventions. Copyright www.orangesmile.com
Best hotel choice for romantic escape, wedding or honeymoon in Belgrade
Belgrade has many wonderful hotels, which are ideal for a honeymoon or just for vacations in romantic setting. Falkensteiner Hotel Belgrade is very popular among couples, as guests enjoy …

Open
If you visit Belgrade on summer, then you will definitely find visiting Ada Ciganlija district very appealing. Here are located the best recreation zone of the city, you can make a picnic in a shadowy park, swim and sunbathe on a beach, or take a walk in one of multiple parks. One more interesting action is driving on the suburbs on a retro train. All coaches are decorated in a retro style and the train will leisurely take you to all historical places of the country, and will bring unforgettable memories from such unusual ride. 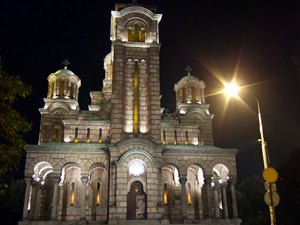 The focus of many of the city's historical symbols is the Republic Square. It is considered one of the most romantic places in the city, this square is a very popular meeting place amongst couples. Around the square there are several beautiful and historic buildings, which today are held by museums and other cultural centres. This is where the National Museum and National Theatre are located, and one of the main decorations of the area is considered to be a monument to Mihailo Obrenovic III.
Shopping in Belgrade - main shopping streets, outlets and boutiques
In Belgrade, lovers of shopping should definitely take a stroll along the main shopping street of the city, named after Knez Mikhailov. Here, are located shops of world's most popular …

Open
Among the outstanding architectural monuments one should definitely highlight the Houses of Parliament. The building is crowned by a beautiful turquoise dome, the construction of this huge building began in 1907 and lasted almost 30 years. Around the spectacular buildings found some excellent sculptures; in the warm season interesting landscapes are formed as decoration at a location nearby. 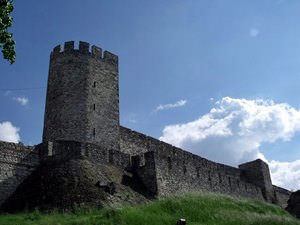 Among the interesting sights is the Belgrade Zoo - one of the largest and most beautiful zoos in Europe. This zoo holds many interesting features, it is in close proximity to the old city walls, which form part of its aviaries. Once upon a time this place was a large city park, and now in spacious enclosures with exotic plants, you can see animals and birds brought from different countries. The zoo features a beautiful artificial pond in which pink flamingos live, also on its territory there are freely strolling peacocks. This zoo differs from others through incredibly beautiful design, its territory is equipped with plenty of comfortable rest areas with benches and playgrounds for the youngest visitors.
Top touristic routes around Belgrade: architectural sightseeing and landmarks
Discovering the architecture of Belgrade from bird's eye view! Belgrade Fortress, National Museum of Serbia, USCE, Church of St. Mark, Church of St. Michael, Genex Tower, Atelje 212, Museum of Contemporary Art, Belgrade Fair, Museum of Aviation, House of the National Assembly, all those monuments are defining the image of Belgrade …

Open
For fans of outdoor recreation in Belgrade a huge selection of park is available; among the most beautiful and comfortable is Tasmajdan park. This park is suitable for both active and a relaxing holiday; in its territory is equipped with several play areas for children are equipped, and so are some comfortable benches. There are special paths for walking and cycling, and you can make a great picnic in private corners of the park. In the park there are multiple symbolic monuments, so a stroll around it may turn into an informative tour.

This guide to iconic landmarks and sights of Belgrade is protected by the copyright law. You can re-publish this content with mandatory attribution: direct and active hyperlink to www.orangesmile.com.
Belgrade - guide chapters 1 2 3 4 5 6 7 8 9 10 11 12 13 14

City tours, excursions and tickets in Belgrade and surroundings

Shopping streets in Belgrade
♥   Shopping area ' Knez Mihailova' Beograd, 2.2 km from the center. On the map

Survived castles around Belgrade
♥   Castle 'Žrnov' Belgrade, 1.6 km from the center. On the map

♥   Castle 'Kalemegdan' Belgrade, 3 km from the center. On the map

♥   Castle 'Smederevo Fortress' Smederevo, 39.3 km from the center. On the map

♥   Castle 'Petrovaradin Fortress' Novi Sad, 69.2 km from the center. On the map

Art galleries in Belgrade and around
♥   Art museum 'Belgrade City Museum' Belgrade, 0.7 km from the center. On the map

♥   Art museum 'National Museum of Serbia' Belgrade, 2.1 km from the center. On the map

♥   Art museum 'Museum of Contemporary Art' Belgrade, 3 km from the center. On the map

Sights around Belgrade from our guide 'Extreme places on Earth' 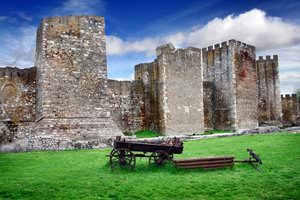 Distance from Belgrade center - 39.1 km.
The ancient fortress has been transformed into a place of public recreation in recent decades. This area is more like a landscaped park today. There are several interesting historical buildings on its territory. Their active recovery continues even today. There are beautiful recreation areas with benches here. Convenient paths for walking and roller skating are laid on the territory of the fortress. There are also various sports fields and picnic areas here. Walking along the fortress wall remains one of the favorite activities for visitors to the park. A wonderful view of the Danube river and the surrounding area opens from it. Visitors can take a lot of spectacular photos. … Read further 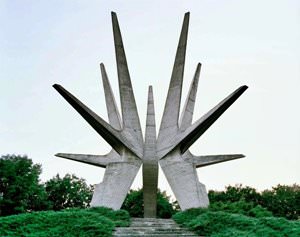 Distance from Belgrade center - 37.4 km.
Most tourists visit the mountain area of Kosmaj in the warm season. But it is extremely inconvenient to admire the monument during this period. Lush green vegetation surrounds it. The branches of the trees almost completely hide the rays of a huge stone star in the middle of summer. Those who want to see the monument in all its glory and make the most spectacular photos should visit these places in early spring or late autumn. Several interesting monuments are also located on the slopes of Mount Avala. They are dedicated to the heroes and victims of the Second World War. Usually, these monuments are visited as part of a single tour. … Read further

Sightseeing in Serbia: things to see

Pristina is another popular travel destination in Serbia. Travelers are recommended not to forget to visit the Fatih Mosque that was built in the middle of the 15th century by order of Fatih Sultan Mehmed. Walls of the mosque are decorated with skillful arabesques made by best Serbian masters. The mosque was severely damaged during the years of war with Turkey, and in 1955 its minaret was completely destroyed by an earthquake. The mosque was completely restored later and now it's a very important landmark. … Open 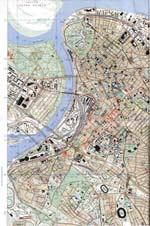 Search touristic sites on the map of Belgrade

Sightseeing in regions nearby Belgrade

Novi Sad
The cathedral built in the name of Mary is one of the most notable attractions in Novi Sad. This is an important Catholic shrine. The cathedral was built at the end of the 19th century. It is not hard to find it because the church is located in the city center, on Liberty Square. In the past, there was a Roman church on the site of the modern cathedral, but that church was ... Open »
Timisoara
Rose Park is considered one of the most romantic places in the city. This place is particularly beautiful during warm months of the year. Here visitors will find several hundred varieties of roses. In summertime the park simply dives the wonderful aroma that emit several millions of flowers. Diversify your walks through the picturesque parks and sightseeing with visits to ... Open »
Osijek
Many entertainment centers can be found around the Europska Avenue Square. It is the oldest library of the city. It was opened in 1905, and the Gallery of Fine Arts was founded a year later. The Holy Trinity Square is a great place for walks. Here you can see the monuments and sculptures of the past. In the eastern part of the square is the location of St. Michael Church. The ... Open »
Sarajevo
Some Orthodox places of interest have survived after the civil war in Sarajevo. These are Cathedral Church of the Virgin Mary, the old Church of Saint Gabriel and Michael, the Old Synagogue (one of three surviving), which now holds the exhibition of the Jewish Museum with the famous Code of the Haggadah, the City Hall built in the Moorish style, and the Cathedral built in the ... Open »
Pecs
Pecs Cathedral or officially the Sts. Peter and Paul's Cathedral Basilica is the signature landmark of the Hungarian city. The first chapel on this site was built yet at the end of the fourth century. Later, the modest chapel was rebuilt into an early Christian cathedral. The Romanesque cathedral was built in 1064 after the fire had destroyed the former church. The Sts. Peter ... Open »
Kecskemet
In the past, there was an ancient settlement on the site of modern Kecskemet. Mongols invaded Hungarian lands in the 13th century and completely defeated local people. Despite big losses and much damage, the settlement recovered quickly. A beneficial location at the crossing of trading routes helped the town. At the end of the 40s of the 14th century, King Louis I of Hungary ... Open »

All about Belgrade, Serbia - sightseeings, attractions, touristic spots, architecture, history, culture and cuisine. Prepare your trip together with OrangeSmile.com - find out the 'must see' things in Belgrade, which places to visit, which excursions to take, where the breathtaking views are waiting for you. Planning your trip with this travel guide will help your to get the most out of Belgrade in few days.