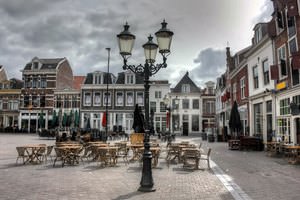 Amersfoort is an honorable ancient city in the Netherlands. It perfectly preserved historical monuments of medieval architecture, so every tourist will be able to enjoy its rich history. Officially the status of the city and its current name the city received in the 13th century. Local people are proud of their history and call it the "city of people" created by people. The city of Amersfoort with a population of 128 thousand people is the second largest city in the province of Utrecht - the central part of the Netherlands. It is also ranked 17th in importance in the Netherlands as a whole. The municipality of the city includes the settlements of Hoogland, Hooglanderveen, and Stoutenburg-Noord. Amersfoort is a very diverse, distinct and prosperous city with modern architecture and a thriving economy.
Extraordinary weekend in Amersfoort - unusual places, services and attractions for travel gourmet
…

Open
The predominant color of the city is blue, which symbolizes water, and green - the color of forests and parks that the city abounds in. From an economic point of view, Amersfoort is one of the most vital cities in the Netherlands with huge manpower and high average income. It is on the third place in terms of net income per capita among 25 cities with a population of more than 100 thousand people. The city will amaze any tourist, even the most refined gourmet with its variety of gastronomic institutions. More than 250 pubs and restaurants offering excellent beer, as well as French, Japanese, Mexican and Flemish cuisine for every taste, from the most affordable to the most luxurious.
During its years, Amersfoort has gained a lot of interesting "nicknames" from tourists, who are delighted with its cozy and picturesque mood. Locals take care of the environment and prefer using the two-wheeled vehicles to cars. For this occasion, the management of the city provided its residents with all the necessary biking facilities. So not surprisingly, that the first nickname of Amersfoort is the "city of bicycles". You will be amazed by a large number of two-wheelers on the streets. It is worth noting that the bicycle is popular with people of all ages here. Copyright www.orangesmile.com
Amersfoort design-hotels for stylish travellers
It’s not difficult to choose a stylish and comfortable hotel in Amersfoort. One of the coolest design hotels of the city is Logement de Gaaper. It’s set in a gorgeous historic …

Open
Another interesting name Amersfoort - "city of youth" or "city of children." The thing is that about 20% of the local residents consist of kids under the age of fourteen. The third nickname of Amersfoort- "the city of boulders", which is associated with an interesting history occurred in the 17th century. Do not hesitate and take a thematic excursion, where the guide will enlight you about events taken in 1661. Young travelers usually refer to Amersfoort as a "city of festivals". Local youth, as well as tourists from nearby cities, are attracted by a variety of holidays and concerts held here throughout the year. 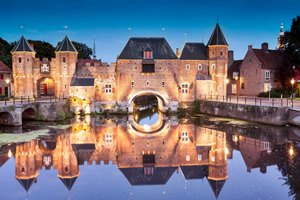 One of the most unusual events of Amersfoort takes place on May annually - the holiday called "Nudist Day". The name of the holiday speaks for itself! The main venue for this event can be found in the famous Sportfondsenbad pool. Due to its rich ancient architecture and history, the city of Amersfoort is one of the venues for the famous national holiday - Open Monumentendag. This is the Open Day in the local historical buildings of Holland. Annually in the second weekend of September, ancient buildings, like houses on canals, lofts, churches, factory buildings open their doors to visitors. And many also prepare an interesting program for its guests. The entrance to the buildings is free. So if you are planning a trip to Amersfoort in September, be sure the witness this event due to the variety of interesting entertainment program.
Top places to stay in Amersfoort - most luxurious hotels
Berghotel Amersfoort - Utrecht deserves priority among upscale hotels of Amersfoort. Its opening was held more than a hundred years ago. The building housing the hotel is one of the …

Open
Due to a great number of kids in Amersfoort, it is not surprising that the most anticipated holidays start in November. Sinterklaas, the predecessor of Santa Claus, comes to the city by ship in the middle of November and presents gifts to those children who behaved well. After St. Nicholas Day, everyone is waiting for Christmas. Local Christmas cannot be compared to the American one. Amersfoort treats Christmas in a special way. There are no excessive decorations on the streets, only modest accents, reminding that Christmas is still coming soon. During this magical holiday, you will be able to stroll around festive streets and purchase various local goods on the small fairs. On December 26, locals celebrate the Day of St. Stephen. The Dutch go to visit various events, restaurants, and theaters. If you decide to combine shopping and travel to Christmas Holland, do not forget to grab a couple of days before or after Christmas, when festive discounts prevail in the stores.

This guide to traditions and festivals in Amersfoort is protected by the copyright law. You can re-publish this content with mandatory attribution: direct and active hyperlink to www.orangesmile.com.
Amersfoort - guide chapters 1 2 3 4 5 6 7 8 9 10

Cathedrals and basilicas near Amersfoort
♥   Basiliek van de H. Johannes de Doper, Laren, 15.9 km from the center. On the map

♥   Kathedrale Sint Maarten, Utrecht, 19 km from the center. On the map

♥   Sint Catharinakathedraal, Utrecht, 19 km from the center. On the map

Unique landmarks in Amersfoort and around

Distance from Amersfoort center - 29.5 km.
Already a century later, there was no trace of the fine, exquisite atmosphere prevailing in the castle. The gardens were destroyed and the castle was converted into prison. In the 20th century the historical building was restored. Today the castle is a branch of the Amsterdam State Museum. Recently, the unusual medieval-style attractions were arranged in the palaces. All visitors can try on the ancient armor or costume of the court jester, learn to deal with the old weapons. In the small courtyard you can enjoy the aristocratic entertainment - participate in the falcon hunting. … Read further

Distance from Amersfoort center - 38.6 km.
The bridge connecting Borneo Island with the Sporenburg Peninsula was opened in 2001. The bridge is located in the center of Amsterdam, next to the striking historical monuments. The workers of the architectural office West 8 decided a few years ago to refresh the center of the city and built this strange high-tech bridge, which reminds of the huge winding python. … Read further

Colors of Amersfoort in photos

Traditions and festivals in cities around Amersfoort

Utrecht
Foreign visitors should definitely take into account local rules of conduct and rules of etiquette, as it will make your stay in the city even more comfortable. Those coming to Utrecht on business matters have to consider the serious and pragmatic attitude of their business partners. Greet each other with handshaking; while getting acquainted call not only name yourself, but ... Open »
Almere-Stad
Almere can be fairly called the youngest city in the Netherlands. Its construction began in 1976. It is also the largest, with 216,000 inhabitants, agglomeration of the Flevoland region, which is the seventh biggest in the country. The decision to build a new city was caused by the growing community of the Netherlands and an attempt to meet the needs of housing construction. ... Open »
Arnhem
Local people celebrate a number of holidays, from memorable events to music festivals. Without a doubt, the King’s Day is one of the most beloved celebrations among locals. Previously it was known as the Queen’s Day. Queen Wilhelmina was the one who started the tradition. Her birthday was celebrated by nearly three generations of the Dutch on April 30th until King ... Open »
Amsterdam
Residents of Amsterdam have always been famous for honesty and sincerity, as well as thrift (this concerns many issues, for example, respect to environment). A rich man here will never show his high position and try to attract attention. Moderation in everything – this is one of the main traits of this nation’s character. The locals are very friendly; they greet everyone, ... Open »
Den Bosch
The main symbols of the carnival are funny costumes and masks, which are often hand-made. Tourists can buy colorful smiling masks in numerous stalls opened especially for the carnival time. Having a festive costume, you can go to parades and processions taking place on all the city's main streets and squares. Besides solemn street processions, the carnival is accompanied by ... Open »
Haarlem
Preparation for this event lasts a whole year. Huge carts depicting a variety of compositions are constructed especially for the parade. On the day of the holiday, the carts are decorated with fresh flowers, painted in all the colors of the rainbow, and turned into graceful fragrant sculptures. The festive procession starts in the town of Noordwijk and ends in Harlem. The ... Open »

Cityguide on traditions, mentality and lifestyle of people in Amersfoort. Learn the best periods to visit Amersfoort to discover its soul - authentic festivals, events and celebrations. We will also reveal the interesting habits, attitude towards the world and to tourists in Amersfoort.