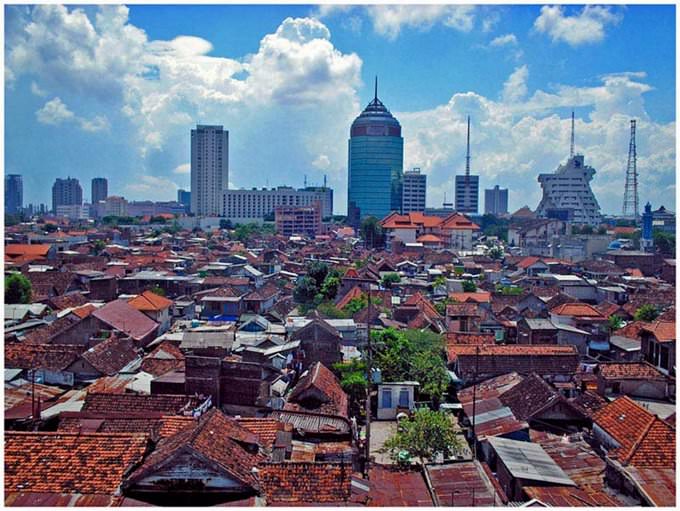 The second largest city in the country attracts travelers with colorful entertainment venues, upscale restaurants, shops and amazing sights. The must see site is a lovely church of Gereja Perawan Maria Tak Berdosa, the oldest religious building in the city. The old building is decorated with sophisticated stained-glass windows. There is always a wonderful soothing atmosphere in the church.
Guide to Surabaya sightseeing - things to see and to visit
The second largest city of the country and a famous trading port, this place is a recreational area of the world level. Surabaya became a part of Indonesia in 1950; prior to this fact it was …

Open
Constructions of the colonial period have also preserved in the city, a shining example of them is Sempoerna. The large-scale construction hosts the most famous art museum in the city, the Museum Sempoerna. Several attractive gift shops and cafes are also housed within its walls.
A trip to the mosque Masjid Al Akbar Surabaya would be an unforgettable experience; the height of this massive edifice is 65 meters. The mosque is one of the largest buildings in South-East Asia. Its dome is equipped with an excellent viewing platform for curious tourists. Today, visitors can climb to the platform using an elevator and appreciate a panoramic view of the city. Copyright www.orangesmile.com
Cuisine of Surabaya for gourmet with top restaurants and cafe
An abundance of colorful spices and seasonings, tender noodles and light soups, original dishes of chicken and fish cooked over an open fire are just some distinctive features of the local …

Open
Age of many city attractions is relatively small, but they have quickly gained international fame. The largest spiral bridge in the country, Suramadu National Bridge, is situated in Surabaya. The amazingly beautiful spiral bridge connects the city with the island of Madura. It looks particularly impressive at night.

The Monkasel museum is an interesting cultural venue housed in the Soviet submarine. It has been in the inventory of the country since 1962; in 1990 it was decided to convert it into a submarine museum. During a tour of the museum visitors would listen about the structure of the submarine and the principles of its operation. It would be interesting for both adults and younger guests of the museum. Tugu Pahlawan historical monument also deserves the attention of travelers. It reminds of an important event in 1945, the landing of British conquerors. The monument is put on a large basement that houses the historical museum. Its main pride is a large collection of old photographs and documents.

In the section below, you can get one of our excursion, activities or city discovery tours over Surabaya and surroundings. Our website offers 10-30% lower ticket prices, when compared to the offline purchase on the spot.

City tours, excursions and tickets in Surabaya and surroundings

This guide to cultural sights Surabaya is protected by the copyright law. You can re-publish this content with mandatory attribution: direct and active hyperlink to www.orangesmile.com.
Surabaya - guide chapters 1 2 3 4 5 6

What to visit during two-day excursion in Surabaya

Unique spots in Surabaya and near Distance from Surabaya center - 78.3 km.
The town does not have first-class hotels. Almost all inns are designed to ensure that tourists will spend in them only one or two nights. Besides volcanoes, this picturesque town has many interesting attractions. There are several ancient Hindu temples. It’s possible to walk to the reserved places and see the local fauna. Cemoro Lawang is the closest settlement to the volcano Bromo. The town is situated at an altitude of 2 217 meters above sea level. … Read further Photogallery of cultural heritage of Surabaya

Excursions over cultural sights of neighbours of Surabaya

Java
Java remains an attractive destination for those who are interested in Buddhism; there are ancient temples and places of worship among its main attractions. Those who can’t imagine their rest without trips to interesting museums would like these places; hikers would be surprised by an abundance of unique natural attractions. There are religious and historical sites literally ... Open »
Bali
Reptile Park also offers its visitors to see a unique collection of animals brought from different parts of Indonesia. Especially for visitors of the park, the local staff organizes exotic shows, during which you can watch feeding of snakes or crocodiles fighting. A walk on the Balinese forests can also turn into a true adventure, because monkeys are the main inhabitants of ... Open »
Denpasar
The city's main attraction is Puputan Square, which has witnessed many significant historical events. It was on this square that the local raja committed suicide in 1906 when a protest action that began in the country put an end to a long colonial period. Today, beautiful Catur Muka Statue depicting the formidable four-faced guard rises in the middle of the square. This statue ... Open »
Lombok Island
One of the most meaningful architecture monuments of the past centuries is Majura Water Palace. This majestic building is located right in the center of Cakranagera district, so you will easily find it. During the reign of Balinese in Lombok, all the important decisions were made here, and this was the place, where the governors of the island lived. The Palace was built in the ... Open »
Bandung
Continue your acquaintance with the local architectural landmarks by making an excursion to the building of the Dutch India Company. The facade of this mansion is made in the best traditions of the Renaissance style. The inner decoration of the house is reminiscent of design of ancient Moorish palaces. Among other attractions of the city we should definitely mention the Great ... Open »

Culture guide to Surabaya. Which fascinating sights to visit once you are in Surabaya: temples, churches, museums, theaters and castles. Recommendations (with addresses, phone numbers and links) on the places 'must visit' in Surabaya. Plan your own city excursion by using this page info!