Video of flights over top monuments of Budapest in HD format.
Use 'Full Screen' mode.
Our suggestion on the way to observe the most important architectural landmarks of Budapest is very simple – fly, read, watch. Thanks to our original 3D technology of flying over cities, you will be able to “visit” (see the video) and watch the most important architectural landmarks of the city - Hungarian Parliament, Matthias Church, St. Stephen Basilica, Vajdahunyad Castle, National Theatre and many others. We have carefully selected the supplementary information for each of them, including interesting historical facts and a collection of photographs. Additionally, we have placed all main sights on the map of Budapest below, since this information can be useful when you plan your walking routes in Budapest. 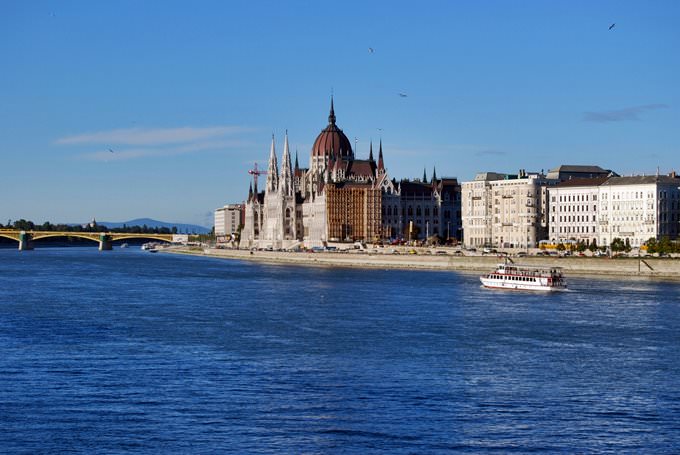 Facts:
» The Hungarian Parliament is the hallmark of Budapest. Here is the residence of the Hungarian Government.
» Construction of the parliament building was conceived after the unification of Buda (the western part of the Hungarian capital situated on the right bank of the Danube) and Pest (the eastern part of the Hungarian capital separated from Buda by the Danube) in 1873.
» The Hungarian Parliament Building is the largest in the country. It consists of 691 rooms, 29 staircases and 10 courtyards.
» The building is very symbolic for the people of the country. Even the height of the central dome (96 meters) is tied to the 896, the date of the conquest of the territory by the Hungarians.
» The Parliament is decorated with dozens of sculptures of heroes of Hungary, including soldiers and great generals, as well as princes of Transylvania.
» About 40 kilograms of gold were used to decorate halls within the building. 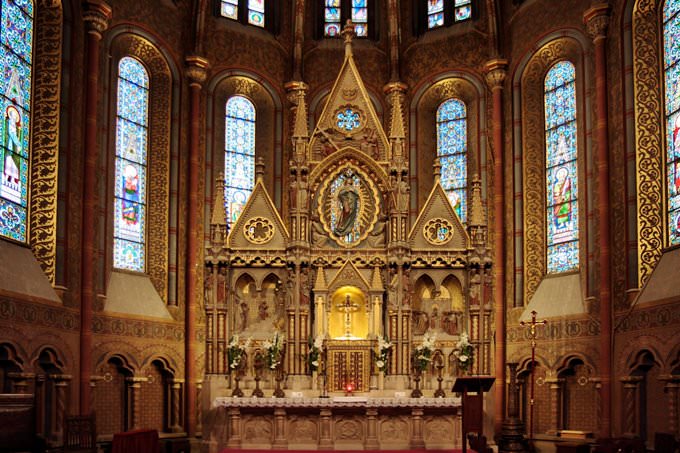 Facts:
» The Matthias Church is the Catholic Church within the Buda Castle, built in the second half of the 14th century in a magnificent late Gothic style.
» The bell tower of the Matthias Church is 80 meters high, so that’s the tallest building of Buda Castle.
» Almost the entire interior of the church was created in the late 19th century, when the church has undergone a massive rehabilitation and reconstruction.
» One of the interesting interior solutions is using beautiful stained-glass windows.
» The gallery of the church, which leads to the underground crypt, houses the museum of religious art. 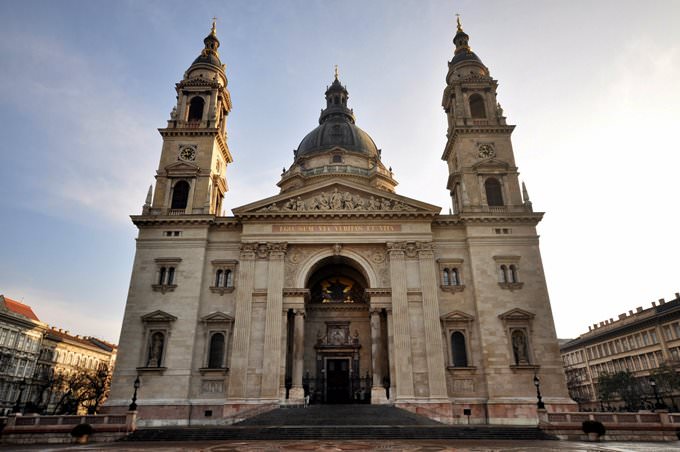 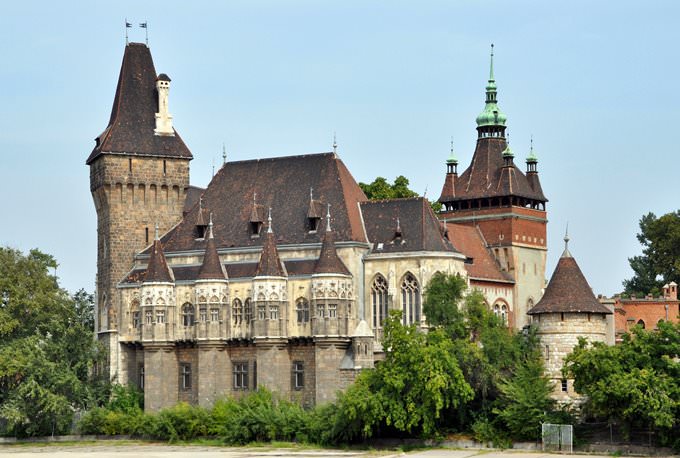 Facts:
» Vajdahunyad is the castle in City Park in Budapest.
» The castle has being built in the period from 1896 to 1908 by architect Ignatz Alpari. The castle has been originally built of wood, and was later rebuilt in stone.
» The Vajdahunyad Castle was built during celebrations of the millennium of Hungary to showcase the elements of the 21 famous buildings of the country.
» Since the castle gathered the parts of buildings from different eras, it reflects various architectural styles: Romanesque, Gothic, Renaissance and Baroque.
» Currently, Vajdahunyad Agricultural Museum is situated in the castle. 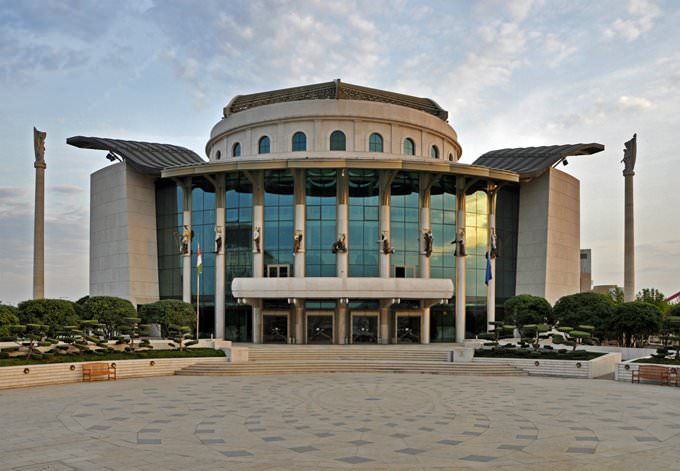 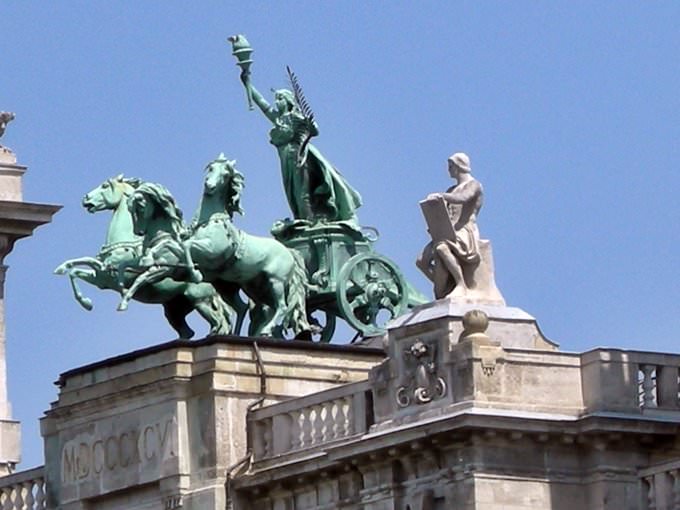 Facts:
» The Ethnographic Museum in Budapest is one of the largest museums of ethnography in Europe.
» The museum is dedicated to the culture of Hungarian people, as well as other European and non-European folks from primitive society to the civilized one.
» In total, the museum's collection consists of nearly 200 thousand exhibits, including artwork, photography, clothing, accessories and jewelry from different eras.
» The museum collection embraces the hunting, beekeeping, fisheries, livestock and pastoral labor, agriculture, crafts, food and kitchen utensils, folk costumes and textiles, housing, customs, religion, games, musical instruments and so on.
» Permanent exhibitions are called The Traditional Culture of the Hungarian People from Primitive Communities to Civilization, Hungarian Folk Art and Culture and Life of the People of Africa, Indonesia and Asia. 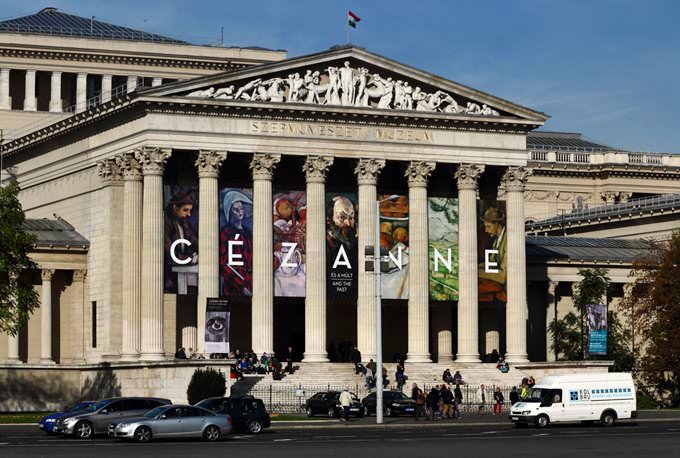 Facts: » Kunsthalle Budapest is the art gallery in Budapest.
» Its exhibition hall has the largest number of exhibitions in the country.
» The exhibition hall was done in the classical style with six columns and bright mosaic on the front; it was opened in 1895.
» Unlike many other galleries, Kunsthalle Budapest doesn’t have its permanent collection, but modern Hungarian and European artists and the art community systematically represent their works there.

Build your walking routes in Budapest on the landmark map Architectural landmarks in the regions around Budapest

Bratislava
According to the historical data, the predecessor of the castle in Bratislava corresponds to the time of the appearance of the Egyptian pyramids (the second half of the 3rd century BC). The building constructed on the hilltop consists of the palace with towers (one of them dates back to the 13th century), defensive walls, gates, and a park. There are corner towers in the quadrangular construction. The exterior of the castle has been preserved ... Open »
Vienna
The Rathaus serves as the seat for both mayor and city council of Vienna. The town hall made in the Gothic Revival style was built in the late 19th century. The main hall of the Rathaus is of great interest for tourists, as its length reaches 71 m. This room is decorated with sculptures of famous Viennese. The hall is often used for exhibitions, concerts and balls. In total, the Rathaus hosts about 800 events per year. The central tower of ... Open »
Krakow
Wawel is the architectural complex on a hill in Krakow. The complex consists of numerous buildings and structures, but the biggest and most famous of them are the Royal Castle and the Cathedral of St. Stanislaw and Waclaw. Wawel is a very important place for the Polish, which was originally the center of political power and the seat of Polish kings. During the 20th century Wawel has being the residence of Poland governors. After the invasion ... Open »
Beograd
The place where the church was built is memorial. Here, the relics of the first archbishop of Serbia were burnt upon the order of the Ottoman ruler in the late 16th century. He contributed to the establishment of the independence of the Orthodox Church. The funds on the construction of the House of God started to be raised in 1895. The temple still exists on donations. It was opened in 2004 due to historical conflicts. The main dome that ... Open »
Sarajevo
The Cathedral of the Nativity of the Blessed Virgin Mary was constructed in 1863 on the petition of the Orthodox Community that asked the government of the Ottoman Empire for building the House of God. The sultan donated 556 gold coins to the construction of the temple. Merchants of Sarajevo paid the missing amount. The Russian Government gifted church utensils, theological books, robes for churchmen, and icons. The best artists were ... Open »
OrangeSmile.com - online travel reservation expert providing reliable car rental and hotel booking services. We feature more than 25.000 destinations with 12.000 rental offices and 200.000 hotels worldwide.
Secure Server