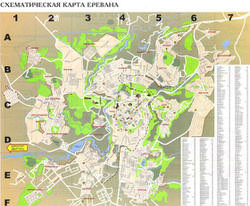 Interactive maps of hiking and biking routes around Yerevan

1. You can zoom in/out using your mouse wheel, as well as move the map of Yerevan with your mouse.
2. This interactive map presents two modes: 'Biking Routes' and 'Hiking Routes'. Use the '+' button on the map to switch between them.

This Yerevan map has two modes: 'Railway Network' and 'Landscape & Rural Map'. Use the '+' button on the map to navigate.

City tours, excursions and tickets in Yerevan and surroundings

Armenia - moving around the country

The aviation industry in Armenia is quite developed. There are only eleven large airports in the Republic, ten of which have asphalted runways. It should be noted that since the times of the Soviet Union, there were small airstrip in the territory of almost every remote settlement. Then again, only a few have survived to this day. At large international airports, flights from the countries of the former CIS region are operated several times a day. Statistics show that the number of tourists arriving in the country by air transportation increases yearly. That is why all airports are gradually undergoing reconstruction and opening new terminals in order to increase their throughput. … Open

Overview of festivals and celebrations in Armenia

Armenia was the first country in the world that adopted Christianity as the main religion. According to the calendar of the Armenian Apostolic Church, Christmas is celebrated on January 5-6. Christmas is a family holiday. On this day, a large family gathers at a festive table. Locals invite relatives and friends. On the morning of January 6, a consecration ceremony takes place in the church. After the service, the Armenians bring some consecrated water home. Easter in Armenia is one of the key religious holidays. Locals call it Surb Zatik, which means "holy liberation." This holiday symbolizes liberation from evil and suffering. In the Holy Week, children tell their most hidden secrets, and adults confess their sins. On Sunday, it is common to share eggs. People exchange three-fold kisses while greeting each other. … Open

Our guide to Yerevan

You will never find so many places of interest and entertainments in any other city of Armenia. Yerevan is a truly unique cultural center and a charmingly hospitable city. You should start your acquaintance with the city from a large architectural center named the Big Cascade. At a glance it reminds a majestic pyramid – this is a large-scale system of ladders that connects the central part of the city with living … Open

An old city with a rich history, Yerevan never ceases to conquer the hearts of travelers. A great number of architectural and historical landmarks, museums, and exhibition centers make Yerevan a true paradise for everyone who likes excursions and strolls in picturesque places. Yerevan Cascade is one of the most original architectural landmarks in the country. It is hard to define the genre of this fabulous place. The … Open

In Yerevan, there are nightclubs, entertainment centers, shops, and restaurants for any taste. The city will please its guests with an abundance of attractive trading centers, beautiful parks, and colorful markets. The latter have already become a true landmark of the capital. Every weekend, Vernissage market opens on Republic Square. It is a great place to purchase interesting souvenirs, antiquities, and crafts. … Open

Of course, it is better to start describing the national cuisine of Yerevan from its most famous and honored food – Lavash. This special bread type is made in accordance with an old recipe in a clay oven called Tonir. Lavash is always present for every meal in the region. There are many interesting traditions associated with cooking Lavash. For example, when kindling into flame, local people usually use dried … Open

Traditions and mentality of Yerevan

Residents of Yerevan cherish their cultural heritage. Just like many centuries ago, they carefully follow the traditions of their ancestors and believe in omens. Keeping ancient national traditions alive is one of the most important aspects for any resident of the city. Respect for elder, friendly and close relationships with relatives and neighbors, responsibility for their family openness and hospitality – these … Open

A unique attraction is the scientific-research center Matenadaran, whose name can be translated literally from Armenian as “a repository of manuscripts”. The main value ​​of this scientific center is ancient manuscripts. There are several thousands of them here. The exact date of the founding of this center is unknown. According to some sources, it was founded in the 5th century. Today, the complex occupies … Open