Sightseeing in Gyumri - what to see. Complete travel guide 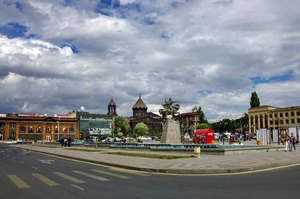 Do you want to visit the center of Armenian humor? In this country, all roads lead to Gyumri, residents of which are famous for their sense of humor. It is hard to find such cheerful people in many parts of the world, and the Armenian city is proud of this fact. Besides that, Gyumri is one of the oldest cities in Armenia famous for its rich heritage and ancient monasteries. Finally, it is impossible to fail to mention the picturesque nature of this region that has always inspired and keeps inspiring local poets and painters. There are still old settlements and villages not far from this city. A visit to them is like a journey to the past, to the time when the history of Armenia and its people just started.
According to historians, first settlers in the territory of modern Gyumri appeared yet in the 6th century BC. However, first mentions of town in this area appeared only in the 8th century when a rebellion against Arabian rulers started here. Gyumri had another name at that time – Kumayri. In the Middle Ages, this was already a large town that kept growing in size and expanding. Kumayri became a part of Persia in the middle of the 16th century. A war between Persian and Russian people started at the beginning of the 19th century and lasted nine years. Russian troops came to the Armenian town and captured it.
In the 30s of the 19th century, Russians built a fortress in the city. After this, the Russian tsar Nikolai I visited Kumayri and changed its name to Alexandropol. Gyumri finally got a town status only after the visit of the Russian tsar. Thanks to the fact that a railroad appeared in the region in the 19th century, the importance of Gyumri raised and it started developing actively in the social-economic and cultural spheres. In 1924, Alexandropol became a part of the Soviet Union and changed its name once again, this time to Leninakan. Only when Armenia finally became an independent country, the city got its current name. Copyright www.orangesmile.com
Vartanants Square is the central square in this Armenian city and a popular landmark that all guests of this city enjoy visiting. When you approach the square, you will immediately notice a beautiful monument in the center. This is the statue of Saint Vardan Mamikonian on his horse. The saint is depicted holding his sword and cross as if he is asking God to help him. Mamikonian is a popular national hero who spent his life fighting for Christianity. He was also against the Iranian invasion. Taking into consideration his achievements and martyrdom, it was decided to canonize Vardan Mamikonian. 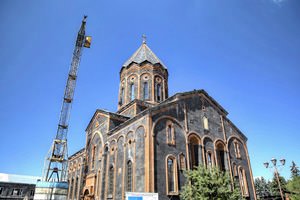 Besides the monument, the square is famous for the Holy Saviour's Church that is located on its southern side. Unfortunately, a devastating earthquake, which happened in Gyumri in 1988, severely damaged the city, destroying many important landmarks. The church couldn’t resist the natural disaster and was also severely damaged. Nowadays, the church is partially restored but it still closed for visitors. To keep the restored building as close to the original as possible, it was decided to use fragments of the original building. Evening is the best time to visit the square. Interesting illumination lights up all major buildings on the square including the city administration.
Black Fortress was built in 1837 right before the visit of Russian tsar Nikolai I. The fortress has a circular shape. The unusual black fortress was built on the highest hill in the area. It was an important protective facility during the Russian-Turkish war. Nowadays, there is no need to protect Gyumri from foreign invaders, and so the fortress is abandoned. This is a private estate that is slowly ruining now. Tourists can go up to the fortress wall and enjoy the panorama of the city and even the Turkish border. 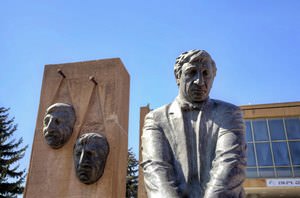 After a long day full of adventures in Gyumri, it is particularly pleasant to walk in the central park. This is a comfortable recreation area with many various amusements. The park remains a cool place even on hot days because of tall and old trees. The green Armenian “oasis” was founded in the 20s of the previous century. An interesting fact – there was a cemetery on the site of this park before. This doesn’t prevent the park from being the most beautiful place in Gyumri. Visitors can take a ride on the Ferris wheel and admire the scenic view of surroundings or take a ride on four-wheelers.
There are several ways of arriving in Gyumri. The first way is to fly to the city. There is an airport in Gyumri that accommodates international flights from Russia and some other countries. It is also possible to fly to Yerevan first and then get on a train to Gyumri. You will reach the destination city in two and a half hours.
This guide to iconic landmarks and sights of Gyumri is protected by the copyright law. You can re-publish this content with mandatory attribution: direct and active hyperlink to www.orangesmile.com.

City tours, excursions and tickets in Gyumri and surroundings

Survived castles around Gyumri
♥   Castle 'Dashtadem Fortress' , 50.4 km from the center. On the map

National and city parks around Gyumri
♥   National Park 'Lake Arpi' , 35.5 km from the center. On the map

Sightseeing in Armenia: things to see

Of course, not all places of interest in Armenia are located in Yerevan. The city of Gyumri is one more beautiful place that can amaze visitors with its historical and architectural treasures. The fortress that shares its name with the city is the symbol of Gyumri. Several monasteries, an ancient basilica and churches are not a complete list of sights that you will see in the city. The most famous landmarks of Gyumri include Harichavank Monastery, the Cathedral of Ani, Marmashen Monastery, and Harich Monatery. Archeological excavations never stop in the city and its suburbs, especially in Lori Berd Fortress built in the 10th century. There are several historic churches near the fortress, such as Nor Getik, Haghpat Monastery, Haghartsin Monastery and Makaravank. … Open

Search touristic sites on the map of Gyumri

Sightseeing in regions nearby Gyumri

Yerevan
The National Museum of Armenia will get you acquainted with history of Erevan. The museum was opened in 1921. Art connoisseurs should move their feet to the Square of Republic where they will find the state picture gallery. The square is a frequent location of multiple exhibitions and fair-trades, where young talents demonstrate their works. Museum of History of Erevan is one ... Open »
Tbilisi
Besides recovery procedures and walks along historical places, Tbilisi is ready to offer tourists a lot of interesting entertainments. There are wonderful restaurants where the guests can taste many types of khinkali and khachapuri, the most popular national treats. Shopping enthusiasts will be impressed by local markets, some of which have been working for many years. The ... Open »
Mtskheta
For many years, the city was the residence of Georgian Catholicoi – the heads of the country’s church. In the Middle Ages, Mtskheta turned into an important center of trade, religion, and manufacturing. In 736, the Arabians and their leader Mervan attacked Mtskheta, causing much damage to the settlement. After that, the city lost its importance and turned into a small ... Open »
Kutaisi
Kutaisi has an airport that serves flights from many countries of the world. However, when planning a vacation in Kutaisi, tourists need to keep in mind that the number of flights to Kutaisi is not big. It is easier to reach Tbilisi first. After that, continue your journey on a train to Kutaisi. The journey time is roughly six hours. Besides trains, there are buses to ... Open »
Batumi
The old city is also beautiful and unique; it has remained unchanged for about 150 years. It is very easy to feel the spirit of the past centuries. On each street you can find cozy cafes, where an amazing coffee is prepared, the fragrance of which is imbued with the whole Old Town. In the historical area there are many handicraft shops with products made by hand, tourists ... Open »
Nalchik
Only 82 families lived in the settlement but then the settlement grew. It often changed because soldiers returned to their native lands after the military service. In 1862, the ordinary military settlement became a large industrial village. The population of the fortress and nearby settlements was exempted from the national service obligation. This attracted more people to ... Open »

All about Gyumri, Armenia - sightseeings, attractions, touristic spots, architecture, history, culture and cuisine. Prepare your trip together with OrangeSmile.com - find out the 'must see' things in Gyumri, which places to visit, which excursions to take, where the breathtaking views are waiting for you. Planning your trip with this travel guide will help your to get the most out of Gyumri in few days.