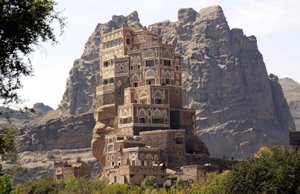 In Yemen, not far from the capital of the state, is the wonderful Palace Dar Al-Hajar, which recalls the beautiful palaces that can be seen in oriental fairy tales. The castle was built on the high rock and looks so harmonious that at first sight one can hardly see where the rock ends and the building begins. For the locals, Dar Al-Hajar is one of the national landmarks. The picture of the wonderful palace can be seen on banknotes, water bottles and popular souvenirs.
The five-storey palace facing the sky is accessible to the tourists. The excursions are conducted daily here. Through the palace you can only walk in the company of the guide. One of the most striking features of the castle is the intricate interior structure, which consists of the numerous labyrinthine corridors and staircases that alternate with rooms of different sizes and purpose. The palace facade is adorned with fine decoration. The windows in Fenstrern are replaced by colorful glass paintings. Thanks to this special feature, the long corridors on the sunny day are colorful and bright, which makes the atmosphere even more mysterious.
Dar Al-Hajar has received an unofficial name 'Peppercake Castle' because of the unusual exterior shape. From the outside, it really looks like a real gingerbread house, which is usually baked in Europe for Christmas. The beautiful palace was built relatively recently, in the 30s of the last century. In it the small courtyard with fountains and the beautiful terraces have been preserved. For Jemens, the palace is one of the most important objects of national architecture. ... Complete sights collection 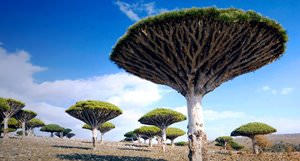 The island of Socorta, located in the Indian Ocean, attracts the numerous followers of the walks through picturesque places. The main characteristic of the island are the plants growing on its territory, many of which can not be seen anywhere else in the world. One of the most striking examples of the local fauna is the dragon tree - a very beautiful tree of the unusual shape that reminds the umbrella.
Although the trees grow rather slowly, their height can reach 12 meters. According to the scientists' calculations, the tree grows to one meter for about 10 years. The giant trees of the unusual shape, which cover the mountain slopes, form the fantastic landscapes on the island, which look like the childrens fairy tales. The dragon tree one the landmark of Socorta Island. The height of the largest tree forms about 25 meters. Apart from the impressive size and unusual shape, the tree still has a special feature. Its resin is scarlet and reminds a little of the blood.
Many interesting legends are connected with the strange tree. The locals believe that the first trees grew in the places where the blood droppings of the vanquished dragon had fallen. During the walks through the picturesque island you can see a lot of unique plants. On Socorta, the wondrous 'monkey tree', as well as more than 800 species of other unique plants. As far as the fauna of the island is concerned, birds are the main inhabitants of Socora. Many researchers come to the island to observe the civet cats. ... Complete sights collection 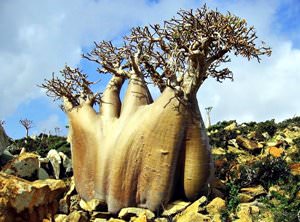 Travelers who want to enjoy the ethereal landscapes have to visit the archipelago of Socotra in Yemen. That’s one of the most remote archipelagos in the world. The main value of the islands is the unique flora that can’t be found anywhere else in the world. During the first visit to the archipelago, a person may have a feeling that he stays on another planet, so incredible some landscapes and plants are.
In total, there are more than 800 plant species on the island and more than 300 of them are endemic. According to scientists, Socotra island has separated from mainland Africa more than 6 million years ago and stayed in the geological isolation for a long time. The hot climate has led to the formation of a very special ecosystem. Visitors can now see the most incredible forms of trees, unique flowers, and valleys that resemble sketches to a fiction movie.
The archipelago located in the Indian Ocean consists of 4 islands and a series of rock formations. Its total area is about 3 800 square meters. One of the most incredible endemic plants, which can be seen in the archipelago, is Dracaena Cinnabari. This unique tree is shaped like a huge mushroom. It reaches 10 meters in height. The plant remains the undisputed symbol of the island of Socotra. The main inhabitants of the islands are birds, among which there are lots of endemic species. The main specie of mammals is gazelle. Fans of diving love to visit the archipelago, as the marine life near the islands is also very diverse. ... Complete sights collection 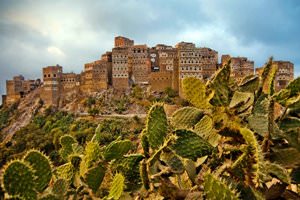 The fortress town of Al Hajjarah is one of the main historical attractions in Yemen. It owes much of its fame and popularity to its relative accessibility. It is extremely difficult to reach many other mountainous areas of the country. Active stone mining was carried out on the site where the old buildings are located today. This was hundreds of years ago. A small settlement was founded near the quarry in the 12th century. It was built into the mountain. Stone extracted from local quarries was used for building houses, granaries, and water vessels.
This town was built on the edge of a precipice. Initially, it provided a good defense against invaders. It is noteworthy that the houses were built quite high here. No special bonding solutions were used in the construction of houses. The stone blocks were simply stacked on top of each other. They maintained the integrity of the structures with their impressive weight. The citadel town participated in important battles during the war with Turkey. It managed to almost completely survive even after a series of bloody battles.
Trade remained the main means of livelihood for the town for many years. Al Hajjarah is a major base camp for trekking today. Many interesting sights have been preserved in the town. The residence of Imam Yahya Muhammad Hamid ed-Din is an outstanding architectural monument. A desert area surrounds the town. It is also of great interest from a historical point of view. Several ancient monasteries and unique archaeological areas are located here. ... Complete sights collection
This article about unique points of interest in Yemen is protected by the copyright law. You can re-use the content, but only under the condition of placement of an active link to www.orangesmile.com.
Yemen guide chapters 1 2 3 4 5 6 7 8 9 10 11

All unique landmarks of Yemen on the map

Photogallery of landmarks of Yemen