Family holidays with children in Yemen - attractions and entertainment 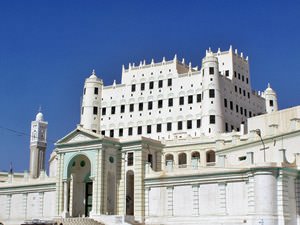 Yemen is an ancient country that is related to such prominent people as Queen of Sheba, Bible’s Noah and his son Shem, and unique architecture that has survived until our days. Yemen’s Arabs became Muslims when Prophet Mohammad was still alive. The country is rich in unique historic landmarks, but all these facts do not mean a lot for children. Real Arabian countries are interesting for adults only while kids love them in fairy tales. This is how things are going for Yemen these days. The country does very little to attract family vacationers. Tourists with small kids are better to choose another destination, and tourists with older children can try to visit Yemen. If there is a problem with planning a holiday in Yemen, consider visiting the most popular choices that the majority of tourists stick to. These are the port cities of Aden and Al Mukalla, the country’s capital Sana’a, and Socotra Island. Don’t forget to get a visa in advance because every foreigner visiting Yemen needs one. It is not possible to get a visa after arrival. The knowledge of foreign languages is always helpful for tourists, but don’t forget that Arabian is the official language in Yemen.
For active traveler - national parks, landscapes and nature of Yemen
If you consider dust an essential attribute of backpacking, then this attribute is virtually everywhere in Yemen. However, its presence doesn’t mean …
Read further
Aden is a typical port city that is located in a gulf with the same name. The gulf is formed in a crated of an extinct volcano. Aden is one of the most popular tourist destinations. This is a city with a rich and long history – it is even mentioned in the Bible and the Book of Ezekiel. The coastal climate of Aden is more pleasant than the hot and dry climate of the desert that is dominant in the countryside. Many tourists visit the country to relax on sandy beaches of Abyan Coast and Seirah Beach and explore the rich underwater world and coral reefs of the region. There are many landmarks that tourists usually include in their “must-see” lists. These are the Zoroastrian temple of a popular ancient religion that still exists; the Sultan of Lahej Palace that currently hosts an exhibition of the national museum with many precious artifacts and detailed information about the country and its cities. It is also a good idea to visit the Military Museum and see ancient fortifications, such as Sira Fortress, Jebel Shamsan, and Jebel Kharid.
It is possible to reach Aden by airplane from Sana’a, Rome, London, Cairo, and Rome. The distance from the airport to the city is only 9.5 km. However, even though a vacation in Aden looks appealing, it is still a vacation suitable for adults, both individual and group travelers. Families will find such a vacation interesting only if all family members are grown up. There is no infrastructure for children and teenagers in the country. There is one more attractive city in the Gulf of Aden and the Arabian Sea – Al Mukalla. This is the second-largest city in the region after Aden. Al Mukalla is the home city for a large community of Parsis Zoroastrians, a branch of the ancient religion of Zoroastrianism. Al Mukalla is often called the most modern city in Yemen. This is also the closest port city to the only part of Yemen with rich vegetation – Socotra Island, the biggest island in the archipelago with the same name. This island with unique nature is located approximately 380 km from the Arabian Peninsula. Due to the mild coastal climate, the island still has relict plants and animals that are extinct on the continent. Copyright www.orangesmile.com
Unique sights of Yemen from our series 'Extreme places on Earth'
These spots really worth the attention of a real traveler-researcher. …
Read further
Sana’a, the capital of modern Yemen, is an ancient city that, according to a legend, was founded by Shem, a son of Noah the builder of the Ark. The earliest documents that mention Sana’a date back to the 1st century. The city is located at some distance from the Arabian Peninsula’s coast. Surrounded by mountains, Sana’a is situated 2,000 m above sea level and has a climate with small temperature fluctuations during a calendar year. The average temperature in winter is 16°C and 24°C in summer. However, there is mostly the difference between the average temperature at night and during the daytime. If we take into consideration only the daytime temperature, then it will be above 24°C absolutely every day. Residents of Sana’a can barely notice the change of seasons. 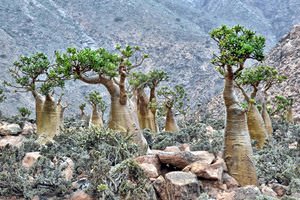 Many buildings in Sana’a are old and were built 300, 400, and 500 years ago. There are older buildings in the central part of the city. When taking a stroll in Sana’a or admiring its skyline from the tall roof of the old caravanserai, it is hard not to think of One Thousand and One Nights stories as the ancient Arabian city looks like a fairytale. When visiting historic landmarks and attending excursions, it feels like Shahrazad’s tales come alive. That being said, the tourist infrastructure is suitable for adults, tourist groups, and elderly people. Children simply have nothing to do.
Yemen sightseeing - top places to visit
An ancient cradle of civilization, a country with miraculous nature and multidimensional culture that formed through thousands of years – modern …
Read further
There are all-inclusive hotels in Yemen, and these hotels are more comfortable and suitable for vacationers with kids. However, don’t expect to find anything else. Even if you surf the net in search of family activities in Yemen, you will hardly find anything suitable and entertaining. Perhaps, this sounds quite sad, but this is the state of the industry today. Family tourism is not a priority in Yemen, so take this fact into consideration when selecting a destination for the next family holiday. Besides that, tourists shouldn’t forget that Yemen hasn’t been a very safe and calm place in recent years. Quite the opposite, actually. The civil war between the Abdrabbuh Mansur Hadi led Yemeni government and the Houthi armed movement claims the lives of innocent people every year, children included. For example, a school bus was shot by mistake in the province of Sa’dah. Among the dozens of dead, the majority were children.

This article about vactions in Yemen with children is protected by the copyright law. You can re-use the content, but only under the condition of placement of an active link to www.orangesmile.com.
Yemen guide chapters 1 2 3 4 5 6 7 8 9 10 11
Country maps