Fun and festivities in Yemen - celebrations, festivals and cultural events 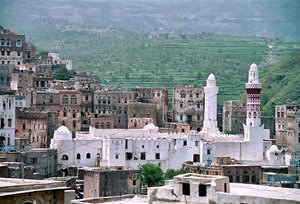 The culture of modern Yemen fully depends on the dominant religion in the country – Islam. It is also worth noting that the historical past of the country is inextricably bound up with the life of Bible’s Noah and the legendary Queen of Sheba. The region was developing before the inception of Islam. Even though that history happened thousands of years ago and the cultural preferences of the region have changed drastically since that time, nothing is forgotten. These two factors – religion and history – have become the basis of the cultural self-identity of Yemenis. Customs of Africa and India also had some influence on the country. For instance, the port city of Aden has some Indian vibes in its architecture. There are ancient Hindu temples that have already become an essential part of Yemen’s cultural heritage. African influence has reflected in a tradition to chew Khat leaves, a mild narcotic substance that causes a feeling of euphoria.
For active traveler - national parks, landscapes and nature of Yemen
If you consider dust an essential attribute of backpacking, then this attribute is virtually everywhere in Yemen. However, its presence doesn’t mean …
Read further
Local cuisine is also an interesting mix of different traditions. There are authentic dishes in the country, such as, for example, Saltah – a meat dish (can sometimes contain fish) that is something between a soup and a ragout. Saltah and Zhug hot sauce are the dishes that originated in Yemen and then slowly spread to other Arabian countries. When it comes to local food, it definitely deserves trying. If a local person invited you to visit Yemen, hospitable hosts will surely offer the finest authentic dishes to try. If you stay at a hotel, it is a good idea to try the same dish in at least two different establishments, for example, in a hotel’s restaurant and a restaurant that specializes in cooking this dish. For example, gourmets claim that Saltah is a lot more delicious in a restaurant that specializes in cooking this dish. That being said, prepare to the fact that you will need to eat this dish without a fork or spoon. The traditional way of eating Saltah is to tear small pieces of a flatbread that is served together with the dish and use it as utensils.
Islamic culture is clearly visible in all aspects of life in Yemen. However, not everyone is able to visit local centers of religion – mosques. Non-Muslim people cannot enter them. However, tourists can visit mosques that already do not work and learn more about the religion of the region from the guide. Because of religion, boys and girls are educated separately in Yemen. Marriages are usually arranged by families, and there is no such thing as the bride’s minimal age. Twelve, ten, and even eight-year-old girls can already become brides in Yemen. The arranged marriages can have different optional agreements, for example, the bride’s family can ask to let the bride finish school first. Weddings can last several days and some events like the dance of young grooms with the sound of tambourine are necessarily public and take place outside. Passersby and tourists can see these celebrations. No one will pay attention to you at moments like this. Tourists just need to keep in mind that they cannot take pictures of women even if they have a niqab on. Copyright www.orangesmile.com
Unique sights of Yemen from our series 'Extreme places on Earth'
These spots really worth the attention of a real traveler-researcher. …
Read further
The folk music of Yemen – homayni – always has lyrics that are added to a pleasant and often sad melody. People sing to the sound of traditional drums and qanbus, a string instrument reminiscent of the lute that is traditional for the Persian Gulf countries. Sometimes people sing without any music at all. Homayni songs can be very long – up to several hours. Locals often call them poetry is a form of a song. As a rule, Yemenis play music and sing at home. As the modern homayni style is mostly widespread in Sana’a, it is also known as Sanaan. 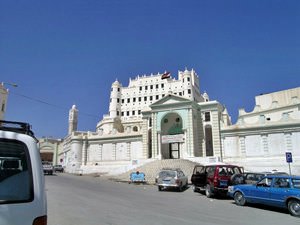 As a rule, folk music plays in the living room on the top floor. Men gather in someone’s house and chew Khat leaves, the singer performs some melody and the rest is listening to it and talking about the art and local news. Khat leaves (a mild narcotic substance) raises the mood and music raises the spirit. Locals call these relaxing meetings in Sana’a “the hour of Solomon”. Local folk music is famous outside South Arabia because of musicians who moved to other countries. Homayni singer Mohammad al-Harithi is one of them. He records his music and performs in different countries.
Yemen sightseeing - top places to visit
An ancient cradle of civilization, a country with miraculous nature and multidimensional culture that formed through thousands of years – modern …
Read further
There is such a modern music style as Yemeni rap. The first festival dedicated to it took place in Yemen in 2009. The event was sponsored by European missions. The ongoing tensions that worsened in 2011 and then in 2014 make it impossible to organize large cultural events in the country. Facilitators of music festivals and exhibitions cannot invite participants because they cannot guarantee their safety. Unfortunately, bombings and fights happen from time to time in the country, hurting peaceful locals. In such life-threating conditions, unstable political situation, and deep stagnation of economy it is virtually impossible to plan and organize large cultural events.

This article about national fests and celebrations of Yemen is protected by the copyright law. You can re-use the content, but only under the condition of placement of an active link to www.orangesmile.com.
Yemen guide chapters 1 2 3 4 5 6 7 8 9 10 11
Country maps