National traditions of Yemen. Habits, mentality and the way of living 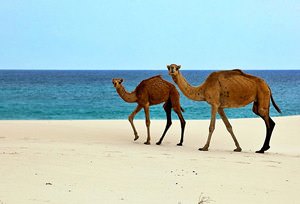 It is hard to call Yemen an ideal destination for tourism, but this country has a great number of historic landmarks of the international level. Many scientists think that Arabian ethnic group originally appeared in the mountain region of the Arabian Peninsula that is currently a part of the northern provinces of Yemen and the southern part of Saudi Arabia. Traditional tribal relations have remained almost in their original form in Yemen. This means that sheikhs have almost unlimited power despite the fact that there is the official government in every region. Sheikh is an undeniable leader for his family or clan. Words of sheikh have the power of law in his own province, and sheikh’s orders can only be limited by religious norms of that region. As sheikh is also the religious leader, his position is unshakable. The official government has to share power with sheiks, and this is the source of frequent conflicts.
What you need to know about Yemen prior to visit - advices
1. Tourists from all countries need a visa to enter Yemen. It is not possible to get a visa upon arrival at the airport, so do all formalities …
Read further
Yemen is a Muslim country, so the life of every person and the country overall is strictly limited by religious norms. Cultural traditions of Yemen are thoroughly intertwined with the Arabian culture. As a rule, local families have many children. Eight children is a typical minimal number of kids. The oldest man in the family is its head, so he is also the main decision-maker. When kids get older, one of the sons together with his wife remains in the house of his parents in order to live together and take care of them. Many marriages are arranged by parents. Girls can marry when they are still very young – 8 years or even 6 years old. According to statistics, more than half of Yemeni women get married when they are still kids. Polygamy is accepted in the country. Education is not necessary for women in Yemen. If a girl gets married early, then she cannot get education because she is obliged to take care of the household and children.
Yemenis are very conservative when it comes to the role of women in society. The position of women hasn’t changed through the centuries. A woman cannot come to a public place without a male relative. Women must also wear traditional clothing (niqab, abaya) that covers her body. Local women can leave their eyes uncovered, and this is already an achievement. However, there can be differences in the law in different provinces. Women can even participate in public life in some provinces. Houses of Yemenis are usually separated into two parts – a male and female one. Men can invite guests to their part of the house, and women do not visit. Only members of the same family are allowed to enter the women’s part of the house. The problem of females’ rights is a complicated topic in Yemen because the traditions of the past are still very strong in the country. Copyright www.orangesmile.com
What to see and what to visit in Yemen with children
Yemen is an ancient country that is related to such prominent people as Queen of Sheba, Bible’s Noah and his son Shem, and unique architecture that …
Read further
Local rules are not so strict to foreign women and there are mostly limitations regarding clothing. However, even these rules may seem too strict for female travelers from Europe. In order not to get into trouble and don’t insult locals, foreign women are better to follow several simple rules regarding the clothing they wear. Skirts must be below the knee length, the head must be covered with a scarf, and all tops and shirts must have long sleeves. Swimwear is suitable only at the beach or poolside. The beach must also be a secure place that is open to foreigners. 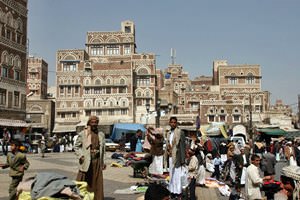 There is an old tradition in Yemen regarding weaponry. According to it, local men must always have a weapon when they are outside. A weapon is a symbol of power and dignity in Yemen. Some time ago, every local man had portable firearms with him wherever he went. Nowadays, the government has banned weapon bearing, but it is still very popular in the mountain regions. The bearing of traditional Jambia daggers is also limited, but these daggers have a long history and have already become a synonym of male power. No one wants to forget about this wonderful tradition, so it is not rare to see a Yemeni male with a sheath without a dagger attached to his clothing. This way, local people respect the law but do not forget about their traditions. Nowadays, it is not rare to see signs with a crossed rifle in every town in Yemen. This is a way to remind people that it is prohibited to bear weapons in this area.
Shopping in Yemen - best shopping places, what to buy?
Having arrived in Yemen, don’t forget to register in the embassy of your country. This is where tourists can also find out the list of items that …
Read further
Virtually everyone in Yemen chews Khat – leaves of a mountain bush that are available in every market. Khat is a mild narcotic stimulant that, nevertheless, is not considered a drug because it causes no addiction. It looks like everyone chews Khat. Life in Yemen literally stops approximately at 4 pm because local people take a break and chew Khat at this time. If a local person invites a foreigner to visit his house and chew Khat, this is a symbol of respect. A refusal would insult the hospitable host, but don’t forget to bring your own leaves. Poor health, for example, high blood pressure after chewing Khat, is a substantial reason to refuse an invitation. Khat is a national treasure for many Yemenis, so they value it and store it carefully, same as money.

This article about national traditions in Yemen is protected by the copyright law. You can re-use the content, but only under the condition of placement of an active link to www.orangesmile.com.
Yemen guide chapters 1 2 3 4 5 6 7 8 9 10 11
Country maps

Famous sites of Yemen in pictures