Nature of Yemen - national parks and reserves for active recreation 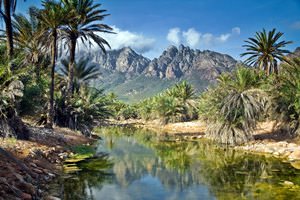 If you consider dust an essential attribute of backpacking, then this attribute is virtually everywhere in Yemen. However, its presence doesn’t mean that it is possible to travel everywhere in the country. Yemen is not as safe as many would wish it to be. In order to travel in the country, foreigners need to get a special permit from the police, and it is not easy to obtain it. If you do not know the territory and its traditions well, don’t even think of traveling alone. You need a local guide. Moreover, if you plan to explore rural Yemen, then you need armed guides. There were cases of kidnapping foreigners in order to get a ransom. Local authorities cannot guarantee that such things will never happen again. That is why tourists are better to walk on central streets only and do not travel alone.
Yemen sightseeing - top places to visit
An ancient cradle of civilization, a country with miraculous nature and multidimensional culture that formed through thousands of years – modern …
Read further
It looks like time has stopped in Yemen. Tourists may feel like local lifestyle stopped changing several centuries ago. Only in historic films Europeans could see how thieves had their hands cut and those cut limbs were displayed in public areas as a warning. Such punishments still exist in Yemen and happen from time to time. The shocking “material evidence” is then displayed in the center of the city and attached to the gates. The gates lead to Bab Al Yemen, the Old Town. The name can be also translated as the gate of Yemen. Nowadays, Bab Al Yemen is a neighborhood in the country’s capital, Sana’a, but its territory is protected by a wall just like centuries ago. This is the location of the most famous market in the city - Bab Al Yemen Market. Originally opened more than a thousand years ago, the market is the main landmark of the area.
All men attach Janbiya to their belts. Janbiya is quite a big curved dagger that is a symbol of strength and honor. Yemeni men feel uncomfortable outside if they don’t have a Janbiya with them. Even though weapon bearing is limited by the country’s law, the old tradition is alive and no one even thinks of forgetting it. In big cities, people have to respect the law so they keep their Janbiyas at home and wear only sheath. In the countryside, no man leaves his house without a Janbiya. It has already become a part of the national clothing. Here it is important to mention that Janbiya is a ceremonial weapon and tourists should not be scared of the daggers as people with rifles are much scarier. Due to civil war, the number of people with firearms is astonishing, and people do not hurry to throw away their weapons. Copyright www.orangesmile.com
National cuisine of Yemen - specialties, recipes and restaurants
Yemeni cuisine attracts even experienced gourmets with its inimitable flavors, wild colors, and authenticity of genuine local dishes cooked by chefs …
Read further
International SOS Company prepared a special report for tourists. In this document, it marked countries with different colors depending on the safety of traveling for foreign guests. The countries marked with the green color are the safest. In 2018, there were only 7 countries in this group – Iceland, Norway, Finland, Denmark, Luxembourg, Slovenia, and Switzerland. Other colors – yellow, orange, red, and burgundy – are used to mark the countries that are less safe with burgundy meaning extremely dangerous for foreign guests. Yemen and almost ten more countries are marked with burgundy. 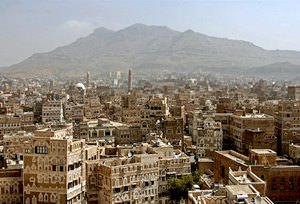 If you have managed to overcome all obstacles on your way and are finally ready to explore the ancient land, an interesting adventure is waiting for you. Life in Yemen is the same as it was several centuries ago. The city of Shibam is a great example. The ancient city, which has an unusual rectangular shape, is built right in the middle of the desert. The place looks absolutely marvelous for foreign tourists – a lifeless desert around the city; local houses – five hundred similarly looking multistory buildings that were built at least 400 years ago, but no one can really say what their exact age is; the building material of all houses in Shibam – mudbricks that consist of clay and straw. Some call it the first skyscraper city in the world – no other country was building anything similar at that time.
National traditions and mentality of people in Yemen
It is hard to call Yemen an ideal destination for tourism, but this country has a great number of historic landmarks of the international level. Many …
Read further
One of the hottest deserts in the world is located in Yemen. Rub' al Khali definitely deserves a visit. It has the length of 1,000 km and 500 km in width. Even fans of extreme activities shouldn’t try to cross the desert. Anyway, it is probably not possible to find a guide who will agree to do this. However, it is very interesting to visit the desert’s border and enjoy a camel or off-roader ride. Tourists can even try dune skiing and sandboarding. A visit to Jabal Haraz will certainly leave many memories. There are mountain Ismaili villages in this part of the country. The villages got their name after the religion – Ismailism, a branch of Islam that became independent yet in the 8th century. 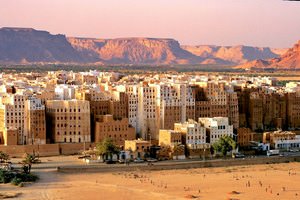 Socotra Island looks nothing similar to the rest of Yemen. The nature of the island, its flora and fauna are simply unique. Among the typical flora of the island, it is important to mention the giant aloe, bottle tree, and dragon tree. The tar of the dragon tree has healing properties, so locals collect it. Because of the red color, they call the tar the blood of the dragon tree. There are many caves in Socotra, so this is a true paradise for fans of speleology. Some caves amaze with their size. For example, Hoq Cave has enough space for a train. Don’t forget to explore Shuab Bay to admire its turquoise water, a comfortable beach, and a sunken ship that is a magnet for all divers.

This article about nature and national parks of Yemen is protected by the copyright law. You can re-use the content, but only under the condition of placement of an active link to www.orangesmile.com.
Yemen guide chapters 1 2 3 4 5 6 7 8 9 10 11
Country maps