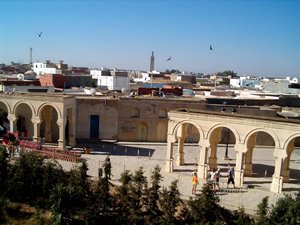 Oases are usually considered lifesaving beacons in the desert, as they save you from sweltering heat. Contrary to popular belief, Kebili Oasis in Tunisia is among the hottest places on the planet. Despite the presence of lush trees and relative shade, the temperature here often rises to 55°C, which is pretty impressive even by African standards.
Oasis Kebili is inhabited; its indigenous people have long been accustomed to hard climate and can’t imagine their life elsewhere. As it was found by scientist, the first settlements on the territory of the oasis have appeared thousands of years ago. Modern scientists were able to find an explanation for the current natural anomaly. Picturesque Kebili is on way of the sirocco wind that originates in the heart of the Sahara and moves the hot air of the desert to the north.
Today Kebili is a modern city, which covers the entire territory of the oasis and has all the important features inherent to conventional settlements. There are several hotels within the city and these places aren’t neglected by tourists. There are lots of notable sites nearby, including the salt lake Chott el Djerid. In times of drought the lake is always dry, but eventually it’s re-filled with water. Kebili is ready to offer its guests all facilities for interesting and informative holiday. ... Complete sights collection 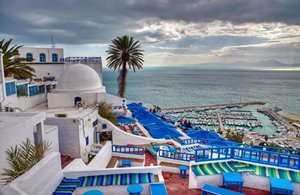 In the Northern part of Tunisia has placed a small city – Sidi Bou Said. One of its peculiarities is a great number of white coloured houses. All shutters, windows, door and signs are painted in deep blue. This town was established in the 12th century and became the destination of choice for wealthy Europeans in the 17th century. At the beginning of the 19th century, a famous French baron Rodolphe d'Erlanger bought a luxurious house there. Therefore, one legend says that he initiated to paint all townhouses in white-blue colours.
This tradition took roots and in 1915 there appeared the law about the building colour. Since that time all buildings must be in white, light blue or blue colours. Today the town is very popular among tourists. Walking on its terraces and streets you can see nooks of the town and take wonderful memorable photos. A central street is a lively place. There have placed shops with local production, outstanding handicraftsman's items, souvenirs.
Most houses that you can see today dated from the 13th century. At the main street, there are several art galleries where you can not only adore with the art but also buy the painting that you liked. Note that every door is decorated, that is one more peculiarity of this town. Notwithstanding that all doors are painted in light blue or blue colour, you won’t see the same doors. Apart from marvellous historical sightseeing this town has a great beach. ... Complete sights collection 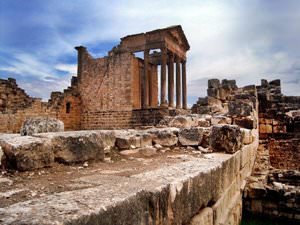 You can see a unique ancient city in the territory of modern Tunisia. It's called Dougga. Its last name has been preserved to this day. The city received it from the Berbers. The name of the city is translated from their language as "pasture". You can see the buildings of the ancient city on the territory of the archaeological area. Its area is about 65 hectares today. The city was captured by vandals in its heyday. Many of its early buildings were permanently destroyed during this period.
Visitors to the archaeological area can see an interesting building from the Punic era today. This is the Mausoleum of Atban. The so-called Capitol has been preserved nearby. It combines the ruins of the temples of Juno, Jupiter, and Minerva. Researchers have discovered fragments of a huge statue of Jupiter on the Capitol grounds. They are kept in the national Bardo Museum today. The theater is one of the earliest surviving buildings of the ancient city. According to historical data, it was built in 168 BC. This historical monument has been restored. It is used for the annual summer festival at present.
Ruins of ancient thermal baths have also been found in the archaeological area. Almost the entire territory of the archaeological area is open for tourists today. The most interesting time to visit the archaeological area is at the end of July. The theater festival starts here at this time. Interesting theatrical performances are held in the old arena every evening during the festival. You can also attend music concerts and various events. They are dedicated to national culture. ... Complete sights collection
This article about unique points of interest in Tunisia is protected by the copyright law. You can re-use the content, but only under the condition of placement of an active link to www.orangesmile.com.
Tunisia guide chapters 1 2 3 4 5 6 7

All unique landmarks of Tunisia on the map

Photogallery of landmarks of Tunisia

Trip ideas for regions of Tunisia

Hammamet
The resort is equipped with several high-class golf centers; one of the most popular is Citrus. It has an excellent golf school and equipment rental centers; experienced players would like it too. The Yasmine golf center invites to play in calm and relaxed atmosphere; it features a very high quality of service. Fans of paintball are sure to look into the Zizou Center; it remains one of the most sought-after providers of family entertainment. It has an extensive playground in a very attractive … Read more

Sousse
Those who can’t relax without walking through the beautiful natural places should definitely look into the Oasis Park El Kantaoui Botanical Garden. It has an excellent collection of tropical plants, so a walk through the gardens will give aesthetic pleasure and will certainly be informative. Vacationers with young children will be interested in colorful Aqua Palace water park built for the little ones. The water park features originally designed swimming pools and playgrounds, as well as … Read more

Monastir
It will be interesting to visit local ranches where you can learn to ride a horse or order a horse ride around picturesque places. One of the most popular ranches among tourists is Skanes located near Monastir. It’s a great place for family recreation. The ranch has a riding school and organizes horse rides along the coast every day. The Skanes area is also attractive because of its sandy beach that is 6 km long. This part of the coast is a real open-air entertainment centre: lots of cafes, … Read more

Djerba Island
If you’re rather fond of more dangerous animals than just horses, crocodile farm in Djerba Explore is definitely your choice. This is the only location in Tunis where these reptiles are bred. Even though you won’t be allowed to touch an adult Nile crocodile, naturally, you still can watch its habits and how about 40 of these ancient predators are fed. Still, if you extremely want to touch a crocodile anyway, there are also small and much less aggressive species on the farm, so you can even … Read more