Detailed hi-res maps of Tunis for download or print 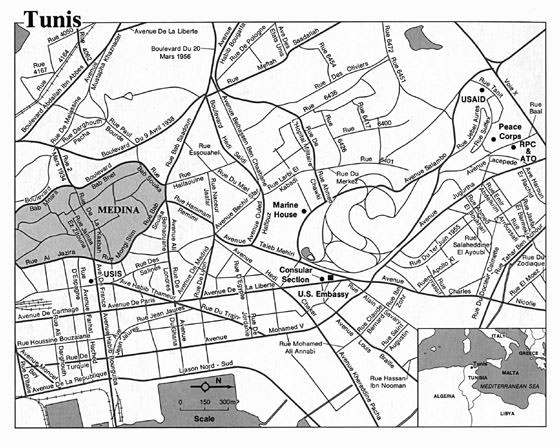 The actual dimensions of the Tunis map are 1933 X 1546 pixels, file size (in bytes) - 215698. You can open this downloadable and printable map of Tunis by clicking on the map itself or via this link: Open the map. 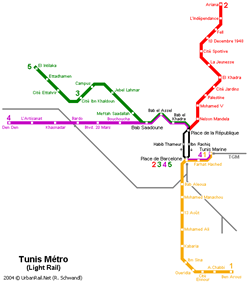 City tours, excursions and tickets in Tunis and surroundings

Moving around in Tunisia - transportation

The transport infrastructure in Tunisia is quite well developed. The most popular form of public transportation is buses. Depending on the carrier’s company, the technical condition of the automobiles also varies. However, every tourist is generally guaranteed a safe and relatively comfortable travel on this type of transport. Also, within the cities, there are particular types of minibuses that stand out among all the others with regards to their color (white with a red horizontal stripe). They are known to commute passengers much faster than regular buses, and their ticket price is also cheaper. It should be noted that in the major cities of Tunisia there is the so-called TGM transport. In fact, it is a regular European tram. The local government regularly allocates money for the purchase of new trams and as a result, moving around the city using this kind of transport is quite comfortable. … Open

Today in Tunisia, most of the output from oil production is exported, which makes it possible to fully improve the country’s foreign reserve. In addition, large foreign exchange earnings also come from the export of the national fruit finik and olive oil. Over the past two decades, Tunisia’s industry has been developing at an incredibly high pace. This also contributed to the influx of foreign capital. Such investments consequently made it possible to open up new industrial facilities and provide employment for the majority of the able-bodied population. The main branch of the economy is the mining industry. In addition to energy resources, phosphorite is also produced here. They are also actively exported. Lead and zinc were first mined in Tunisia about a hundred years ago. Despite the fact that the deposits of these ores, as well as other non-ferrous metals, are depleted, extraction activities are still ongoing. … Open

Search for services, infrastructure and sights on map of Tunis

Our guide chapters over Tunis

For lovers of picturesque corners we can recommend Belvedere Park, one of the most beautiful and largest in the city. Rare species of pine trees, palm, olive, and fig trees grow here. The park is located on the hillside. If you reach its top, you'll enjoy a wonderful panorama of the city. A small zoo operates here, as well as the Museum of Modern Art with a collection of Tunisian artwork. Not far from the … Open

In addition to magnificent monuments of the past we simply can’t fail to mention beautiful markets of Tunisia. Here you will find all kinds of products, but seafood and sweets remain the leaders among sales, as well as flavorful and unique tea. Many art connoisseurs call Bardo Museum the real treasure. This facility is opened at Dar Hussein Palace. The collection of Roman mosaics, which is exhibited in the … Open

Maps of Hammamet
As for locals, they have their own unique clothing style. During a walk through residential areas of the city you can see women dressed in yashmak; many women tend to the obvious European style and prefer to wear trousers and classic blouses in the everyday life. One of the typical national garments are blouses and jackets with Kashmiri patterns, they look very fashionable and ... Open »
Maps of Favignana Island
Italians always get friends with foreigners. There is a joke, that locals prefer to be friends with foreigners because they live far away and you don’t have to help them with a job or domestic affairs. Family is very important for Italian people. Uncles, cousins and distant relatives are close people here. The family is usually ruled by a grandmother, but not a ... Open »
Maps of Trapani
The procession with the statue also passes through the city during the Feast of Our Lady of Trapani. The procession starts from the Cathedral Church at 20.45. Anyone can join it. You can see beautiful fireworks at midnight. The city also celebrates traditional European holidays like Valentine's Day or All Saints' Day. New Year is also celebrated here. This is the time of ... Open »
Maps of Cagliari
Among national holidays celebrated in Cagliari (and across Sardinia), Easter (Semana Santa) and Christmas (Natale) are the most popular. Easter is a family holiday. In the morning, locals usually visit church for a special festive mass. Before Christmas (namely, at the beginning of December), Fiera Internazionale della Sardegna hosts Fiera di Natale, which is a wonderful ... Open »
Maps of Palermo
While in the daytime city residents and guests of Palermo are entertained with different contests and sport competitions then in the evening the guests are amused with various music performances. The evening events are commonly open air. The stages and platforms are equipped right on the beaches. Guests of the World Festival on the Beach may attend different exhibitions of ... Open »
Maps of Sicily
One of the most interesting festivals of this kind is the Ottobrata Zafferanese event, which is traditionally held in Catania sometime in October. Every year, hundreds of thousands of event tourism enthusiasts come here from all over the world to participate in it. The peculiarity of this festival is that it is divided into several sub-events, each of which is dedicated to a ... Open »
OrangeSmile.com - online travel reservation expert providing reliable car rental and hotel booking services. We feature more than 25.000 destinations with 12.000 rental offices and 200.000 hotels worldwide.
Secure Server