Detailed hi-res maps of Trondheim for download or print 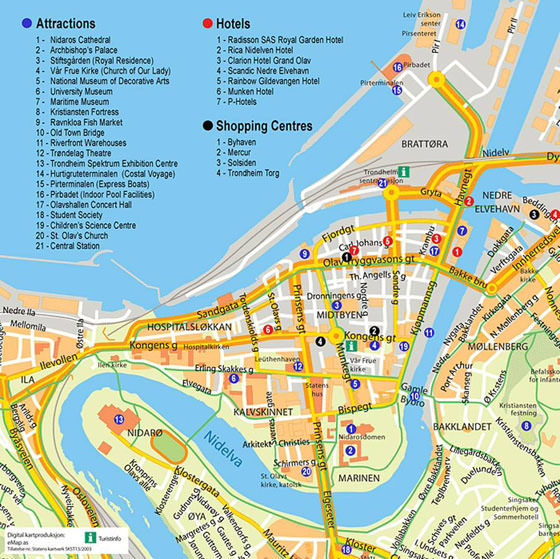 The actual dimensions of the Trondheim map are 900 X 899 pixels, file size (in bytes) - 178215. You can open this downloadable and printable map of Trondheim by clicking on the map itself or via this link: Open the map.
Trondheim - guide chapters 1 2 3 4 5 6 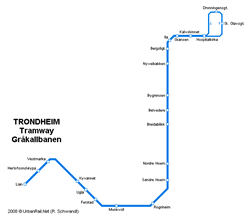 City tours, excursions and tickets in Trondheim and surroundings

Moving around in Norway - transportation

Aviation plays a leading role in Norway’s transport infrastructure. The domestic air transportation has been developed to a magnificent level. This is in general due to the fact that the country has a fairly complex mountainous terrain, thereby making it sometimes cheaper and faster to go on a trip by plane than by road. Also in winter, the most severe regions of Norway can only be reached by plane. The main airport in Norway is the airport Gardermoen in Oslo. The transport interchange from key airports of the country is thoroughly thought out. Buses, high-speed trains and other public transport regularly ply the route. … Open

Norway’s economy depends on the world economic cycles, but in recent years it has maintained a remarkable stability. To date, this Scandinavian country is characterized by a fairly high standard of living of her local population. Norway is one of the few countries in the world that has most easily survived the huge financial crisis that hit the world almost 10 years ago. Today, the country demonstrates a positive development dynamics. Most of the stability of the Norwegian economy is associated with significant reserves of oil and natural gas and even gas condensate in the country. Experts also note that Norway has a lot of reserves of iron ore and coal, copper ore. In addition, nickel and titanium mining are in progress. … Open

Search for services, infrastructure and sights on map of Trondheim

Our guide chapters over Trondheim

Dynamic and modern Trondheim has not only an abundance of amazing sights, but also a decent choice of entertainment venues. Hikers and fans of outdoor recreation like Ringve botanical garden. It remains one of the most popular destinations for family holidays, as the usual walk through the garden will turn into an exciting and informative event. Sports entertainment fans will be interested in visiting Trondheim in … Open

Tourists looking for a low-cost dinner may like the Matute restaurant. It offers both national and popular foreign dishes. Its Currasco hamburger made of fresh beef filets is a real masterpiece and an example of typical Chilean meal. Dromedar Kaffebar Bakklandet is the one to pay a visit too. It's very popular amongst people preferring to spent time in calm and relaxed atmosphere. A large selection of coffee and … Open

Traditions and mentality of Trondheim

Citizens still remember their brave and wise king and after thousands of years dedicate this holiday to his memory. King Olaf's remains are enshrined at Nidarosdomen; Norwegians treat king as their patron saint. The festival runs for ten days and embraces lots of events. Open air concerts, competitions and Medieval-decorated shows are held during holidays. The City Fair is another festival tradition. Nowadays Fair … Open

Houses on stilts are considered the most unusual architectural monuments. They were built in the 18th - 19th centuries and served as storage space. Almost all the buildings were completely destroyed during a major fire. Thanks to the old schemes, they were restored in full accordance with the original ones. On a hilltop east of the city is the ancient Kristiansten Fortress, built in the 17th century on orders from … Open

7. Travelers who are planning to have a trip during the second half of July are recommended to book a room at the hotel in advance. At the end of the month the city hosts a holiday in honor of St. Olaf and there are always lots of visitors and pilgrims. 8. Almost all museums in Trondheim has one admission-free day, so budget travelers shouldn’t deny themselves pleasure to have excursions. You can clarify the … Open

The city symbol and the national religious landmark is Nidaros Catherdral also known as Nidaros Domkirke. Construction of this huge and beautiful building has begun in 1070 and ran for almost two centuries. The unique relic - remains of Saint Olaf – is stored here. Legendary King Olaf has established Christianity culture in Norway and became famous after his heroic deeds. The cathedral was reconstructed in the … Open