Detailed hi-res maps of Alesund for download or print 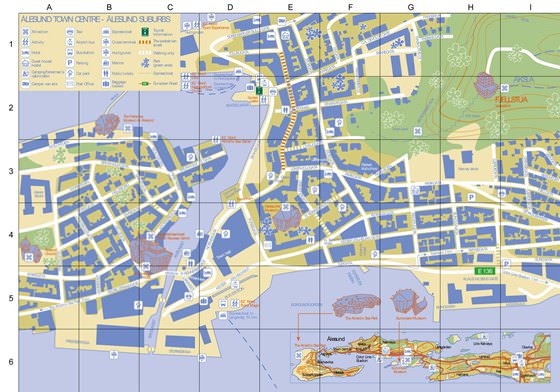 City tours, excursions and tickets in Alesund and surroundings

Moving around in Norway - transportation

Aviation plays a leading role in Norway’s transport infrastructure. The domestic air transportation has been developed to a magnificent level. This is in general due to the fact that the country has a fairly complex mountainous terrain, thereby making it sometimes cheaper and faster to go on a trip by plane than by road. Also in winter, the most severe regions of Norway can only be reached by plane. The main airport in Norway is the airport Gardermoen in Oslo. The transport interchange from key airports of the country is thoroughly thought out. Buses, high-speed trains and other public transport regularly ply the route. … Open

Norway’s economy depends on the world economic cycles, but in recent years it has maintained a remarkable stability. To date, this Scandinavian country is characterized by a fairly high standard of living of her local population. Norway is one of the few countries in the world that has most easily survived the huge financial crisis that hit the world almost 10 years ago. Today, the country demonstrates a positive development dynamics. Most of the stability of the Norwegian economy is associated with significant reserves of oil and natural gas and even gas condensate in the country. Experts also note that Norway has a lot of reserves of iron ore and coal, copper ore. In addition, nickel and titanium mining are in progress. … Open

Search for services, infrastructure and sights on map of Alesund

Our guide chapters over Alesund

Alesund for children - what to visit

Most family tourists enjoy visiting the main public park in the town – Byparken i Ålesund. This is a true historic attraction – the park was established in 1885. At the end of the 19th century, Alesund was recovering after a large fire. A big part of the town’s buildings was in ruins. The old park is a charming and tranquil place with original landscaped design and multiple decorative plants that appear … Open

There are many attractive shopping streets and quarters in Alesund but the majority of interesting shops and malls are open in Aspøya. This is the place where you will find original shops that sell home décor items and handmade souvenirs. There are also several art galleries selling exclusive paintings and other crafts and in this part of the town. If you want to add new and trendy outfits to your wardrobe, … Open

Besides historic and cultural attractions, unique nature is a true treasure of Alesund. You will have many ways of making your vacation in this Norwegian town more exciting. Try different activities and explore the most picturesque areas of the town and its suburbs. Most tourists visit Fjellstua Viewpoint – this is a popular observation area located on the top of a mountain. Quite a steep stair with more than 400 … Open

A devastating fire destroyed almost all historic buildings in Alesund. Nevertheless, the town is considered one of the best destinations for sightseeing in Norway. Alesund is famous for its architectural landmarks and cultural centers. The main church in the town – Alesund Church – is a gorgeous example of medieval architecture. Although it was built in 1909, the church looks like typical buildings of the 10th … Open

Maps of Bergen
In mid-September, the city of Bergen also known as "The Gateway to the Fjords of Norway" gathers many cosplayers and comic-book fans. The festival, as part of which people dress up like their favorite characters, is called Raptus, and it is held in Folkets hus. Of course, it can not do without famous writers and illustrators as festival participants answering the questions of ... Open »
Maps of Trondheim
Trondheim is a busy student city with a long history and rich culture. Its festivals and holidays are very popular among curious tourists. Every national holiday has a history; its rituals and celebrations have been run for centuries. One of the most interesting and colorful national holidays is Saint Olaf's Day taking place at the end of July. It's dedicated to the King Olaf ... Open »
Maps of Lillehammer
Lillehammer began attracting tourists relatively recently, after the Winter Olympics that was held here in 1994. Today, most tourists primarily associate it exclusively with winter entertainment and sports competitions. Along with that, Lillehammer is a very distinctive and charming city with its own unique cultural traditions and a very eventful life. Local people are ... Open »
Maps of Oslo
Not surprising that during Christmas holidays, the Norwegian capital becomes absolutely beautiful. The preparation for these holidays starts very early. The city is decorated natural huge Christmas tree and lights of garlands. During all December and early January, you will be able to enjoy numerous Christmas fairs, where you can buy the main Norwegian Christmas treat - ginger ... Open »
Maps of Goteborg
Visiting Gothenburg in late April, you can witness such an event as The International Science Festival (Vetenskapsfestivalen) taking place in various locations. Seminars, exhibitions, workshops are held within its framework, and every new year is devoted to a particular topic requiring discussion. Without exaggeration, it is the biggest event of its kind in all of Europe, ... Open »
Maps of Alborg
For the parade, local residents prepare colorful costumes. Preparations for the holiday begin a few months prior. During the carnival, a solemn regatta of sailing ships passes through a large canal that crosses Aalborg. All of them are brightly decorated on the occasion of the holiday. The harbor area is the endpoint of the regatta. Each year, within the framework of the ... Open »
Maps of Vasteras
The city, on the contrary, becomes very silent. There are not many pedestrians and cars even in the midst of the day. Circlet of flowers has been the main symbol of Midsummer for centuries, so locals start this day with gathering flowers. In accordance with an old tradition, each family should install a special pile that is decorated with flower garlands and ribbons. All main ... Open »
OrangeSmile.com - online travel reservation expert providing reliable car rental and hotel booking services. We feature more than 25.000 destinations with 12.000 rental offices and 200.000 hotels worldwide.
Secure Server