Nature of Taiwan - national parks and reserves for active recreation 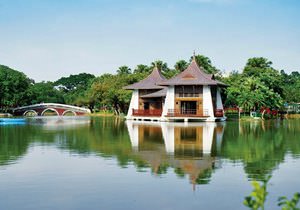 Taiwan is a small island in the waters of the Pacific Ocean, a large part of which is occupied by a chain of Taiwan Mountains. To the east, the mountains fall towards the rift valley, separated from the sea by a low ridge. To the west of the mountains, stretch hilly plateaus and spurs, passing into the flat plain of the coastal zone. In the western part of the island, extensive agricultural land is intersected by numerous rivers. More than half of Taiwan’s area is covered with dense forests. The slopes of the mountain ridges are covered with untamed coniferous thickets and huge expanses of plains are captured by natural thickets of bamboo. Tropical flora can be seen growing in the warmer regions. The North of the island is characterized by humid climate as found in the subtropical regions of the world, while in the south, tropical climate dominates. During the year, monsoon seasons are replaced by typhoon seasons.
National traditions and mentality of people in Taiwan
The mentality of the Taiwanese for centuries was formed in the conditions of rice cultivation under the influence of traditional Confucian education, …
Read further
All of the natural diversity of Taiwan is carefully guarded by the system of National Parks. There are six state nature conservation complexes on the island, among them; Kenting Park with coral colonies, Yushan with forested mountains, Yangmingshan with waterfalls and warm springs, Taroko with a beautiful natural gorge, Shei-Pa with an interesting fish fauna, and Kinmen with a war memorial. Among the twenty remaining protected areas of Taiwan are the Penghu and Zhiyotan Reserves, the Ethnological complex “Formosan Aboriginal Culture Village”, the Beitou Resort, the Yangliao Seaside Park, the Hualien Farglory Ocean Park, and the Zu Lake, a resting place for hundreds of migratory birds. The main tasks of the Taiwan National Park system are nature conservation, the development of recreational tourism, and the creation of a research base.
Kenting National Park is Taiwan’s first protected natural complex. It occupies the southern tropical shore of the island. From its three directions, the nature protection zone is surrounded by the waters of the Pacific Ocean and two channels. It is famous for its fascinating coral reefs, monsoon seasons, and moist tropical forests. Within the protected territory of Yushan is located a large part of Taiwan’s mountain range with the famous over “three thousand” meter high – Yushan mountain. Yushan is considered to be one of the largest parks of the island least affected by human civilization activities. In the nature conservation complex, you will come across different kinds of animals. Many kinds of plants also grow here. Some mammals found refuge for themselves here too. Among them are; the Barking deer or muntjacs, Serau, black bears, and macaques. Copyright www.orangesmile.com
Taiwan cultural sights. What to see?
Taiwan is a Pacific island which is formally considered a territory of China. It opens in a whole new light to everyone who comes here. The …
Read further
Many geothermal springs have been preserved in the protected territory of ​​Yangmingshan. Together with the gas emissions in the vicinity of the Yangmingshan Mountain, these unique natural phenomena bring to mind the volcanic birth of Taiwan. The flowering period of acacia and cherry trees in Yangmingshan lasts from the end of winter up until the middle of spring. The fragrant aroma of the trees draws birds and colorful butterflies. The pearl of the Taroko National Park is the Taroko marble gorge. This colossal creation of nature rises directly from the waters of the Liu River. The beautiful nature of the protected area is represented by snow-capped mountain peaks, majestic waterfalls, and pristine forests. Several hot springs have also been preserved in the park. To this day, Taroko serves as a place of residence for aborigines from the Atayal tribe. The research center situated in the same place, chronicles the life of the tribe by exploring artifacts with modern technologies. 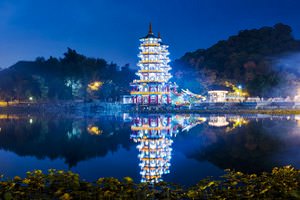 Visitors to the Sha’ba conservation zone are attracted by two grandiose mountain peaks – Seshan and Dabajian. Most of the park’s territory is in the process of development, and it is precisely there that you can see the cleanest mountain streams and vast forests untouched by man. Several species of four-legged mammals dwell in the Park. On the site of two large-scale battles of the 20th century, the Kinmen protected natural complex was founded to perpetuate the memory of historical events. For a long time, the park belonged to the armed forces of the Republic of China; therefore the nature within its territory is perfectly preserved. One of the attractions of the area is the beautiful Zu Lake, which is a resting place for various kinds of migratory birds, whose paths run through Taiwan annually. The buildings of local villages still preserve the traditions of Chinese architecture in the style of buildings in Fujian.
Things to do in Taiwan - active leisure
Taiwan offers a wide range of ​​opportunities for outdoor recreation to thousands of fans who come to the island annually. The Xinguluan and …
Read further
Taiwan’s national park system is divided into several regions, each of which has its own management. Each region unites the park zones, subdivided by the specifics of the landscape and their corresponding purpose. There are zones of general protection, recreational zones, places of historical and cultural importance, natural-scenic zones, and zones of environmental protection. Each of the National Parks has its own administration that is responsible for issuing individuals permission to visit it. In addition, there are natural exhibition centers that provide guide services in most parks and reserves. Most natural sites are concentrated in natural-scenic zones, and their lands are not subject to artificial development.

This article about nature and national parks of Taiwan is protected by the copyright law. You can re-use the content, but only under the condition of placement of an active link to www.orangesmile.com.
Taiwan guide chapters 1 2 3 4 5 6 7 8 9 10 11

It is not a secret that the COVID-19 pandemic has hit global tourism badly, and World Tourism Organization (UNWTO) once again proved this. According to the recently published data, international tourist arrivals between January and May 2021 were 85% below the results of 2019 and 65% below the results of 2020. It is safe to say that this is the biggest crisis that world tourism has ever seen in its history, and the industry has to stay in such a state for the second year.

Cultural sights in regions of Taiwan

Taipei
Taipei's outstanding architectural monuments worth mentioning include the Chiang Kai-shek Memorial dedicated to the famous President of the Republic of China. In front of the memorial is Liberty Square - one of the most beautiful places in the city ideal for leisurely walks. The square is surrounded by the city's several important cultural facilities, including the National Concert Hall and the National Theatre. Sun Yat Sen Memorial Hall can also claim the title of one of the most … Read more

Taiwan: Map of sightseeing in regions