Cultural sightseeing in Taiwan. What to visit - museums, temples, castles and palaces 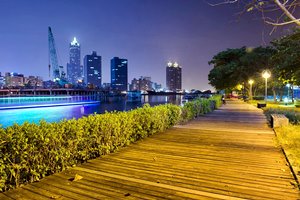 Taiwan is a Pacific island which is formally considered a territory of China. It opens in a whole new light to everyone who comes here. The attractions of Taiwan embody the unique and distinctive culture of the island, and allow you see the world from a different perspective. Taiwan’s landmark is the Taipei 101 skyscraper. The number “one hundred one” in the name of the building, denotes the number of floors, and symbolizes the renewal of the times. Under the roof of this miracle of engineering are offices, fitness centers, shops, restaurants, exhibition galleries, among others. At an altitude of more than 380 meters, you can see a huge tuned mass damper supporting the construction of glass and metal in balance. Also, from the observation platforms which can be accessed by high-speed elevators are opened exciting views of the metropolis. In the dark, the skyscraper is illuminated by one of the seven colors of the spectrum in accordance with the day of the week.
Unique sights of Taiwan from our series 'Extreme places on Earth'
These spots really worth the attention of a real traveler-researcher. …
Read further
One of the most beautiful temples of the island is the Longshan Temple in Taipei. Built in the era of the Qing dynasty, the temple was repeatedly destroyed and restored. Today, it is one of the Taiwanese centers of Buddhism. The name of the temple is translated from Chinese as “mountain of the dragon”; precisely why its interiors are decorated with numerous images and sculptures of dragons. The Presidential Palace of Taipei draws attention to its architecture which is built in the style of the eastern baroque. Before, it served as the residence of the Japanese governor-general of Taiwan, and today it symbolizes the period of the Island’s colonial dependence on Japan. Another notable example of palace architecture is the Museum of the Imperial Palace, which contains a unique collection of historical and cultural values. You can visit exhibitions of porcelain and jade, painting and calligraphy, ancient coins and ornaments, all in the museum.
Several ancient fortifications have been preserved in Taiwan, the most famous of which is the Fort San Domingo in Taipei. It was built in the 17th century by the Spaniards to strengthen her domination over the Aborigines of northern Taiwan. A veranda of red brick under a red tile roof and old artillery pieces are of great interest. No less popular among tourists is the Fort Province in Taynan, which is also famous like the Towers of Chikan. It was built in the 17th century by the Dutch, in a place which was before then the village of locals. At different times, the fort was used as a storehouse for gun powder and was destroyed during wars and earthquakes. In the 19th century, two beautiful churches (examples of classical Chinese architecture) were built within its territory in honor of the gods of the sea and literature. On the ninth stelae of the temples are carved lines from the verses of Emperor Qianlong. Copyright www.orangesmile.com
Taiwan sightseeing - top places to visit
A small island located between Japan, China and the Philippines, Taiwan is a modern megalopolis and a rapidly developing country. Many know Taiwan …
Read further
In the city of Kaohsiung, on the shore of the Lotus Lake, is situated the majestic temple of Confucius built in the architectural style of the Song Dynasty. This building which is the largest center of Confucianism on the island, also houses several altars and a library. To the left of the temple you can see a bridge with bronze plates, telling about the life and teachings of Confucius. Here you will also find the unique pagodas, “Dragon” and “Tiger”. You can get inside the seven-storey structure through the mouth of the dragon, and exit through the mouth of the tiger. The tiers and roofs of the pagodas are decorated with graceful white balconies and miniature pagodas respectively. Another attraction of Kaohsiung is the largest stadium in Taiwan, built for the opening of the VIII World Games in 2009. The unusual spiral shape of the structure attracts attention. 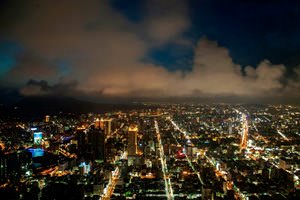 In Xinbei is located the Museum of World Religions. This museum was founded in 2011 by a Buddhist monk Shin Tao, and was constructed based on the project of a Taiwanese architect. The exposition of the museum tells about ten religions of the world, and also includes models that demonstrate the founding of the Earth. Created to eliminate cultural and religious contradictions, the museum serves as a venue for international events. In Taichung, it is worthwhile to visit the unusual Rainbow Village. Formerly, it was an unremarkable settlement for the soldiers of the National army. Today, thanks to the efforts of the Hong Kong veterans, it annually attracts thousands of tourists. The streets and walls of the houses of the Rainbow Village are covered with colorful paintings represented by vivid ornaments, and primitive images of animals, and plants.
National cuisine of Taiwan - specialties, recipes and restaurants
Taiwan is a small island whose cuisine was formed at the intersection of the culinary traditions of China and Thailand. Being developed in isolation …
Read further
In the city of Yilan, operates the only museum of sculpture in Taiwan. Under the open sky are displayed more than thirty works of the famous Taiwanese sculptor and his sons, among them sculptures, and carved wooden figures. In the museum you can also see the masterpieces of such world-famous creators as Picasso, and Warhol. Visitors admire the sculptures that can move under the power of the wind. In Zhanghua, you should pay attention to one of the masterpieces of world architecture – the Buddhist monastery Zhong Tai Chan. Built at the beginning of the 21st century; the monastery combines the traditions of classical Chinese architecture and modern technology. Also calling for special admiration is the huge gold-plated dome of the monastery church, whose height exceeds 130 meters.

This article about cultural sites of Taiwan is protected by the copyright law. You can re-use the content, but only under the condition of placement of an active link to www.orangesmile.com.
Taiwan guide chapters 1 2 3 4 5 6 7 8 9 10 11

♥   Art museum 'Fangyuan Museum of Arts' Tainan. On the map

Palaces in Taiwan
♥   Palace 'Fort San Domingo' . On the map

♥   Palace 'Official Residence of the President of the Republic of China' . On the map 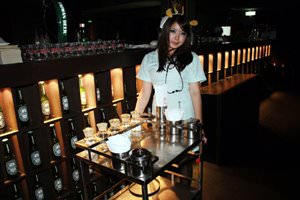 Those who love to relax in the unusual places that visit Taipei can visit the thematic restaurant DS Music. The restaurant is dedicated to medicine. At the entrance, visitors are greeted by the friendly hospital staff in white doctor coats and bonnets. The food is brought to the table on the medical carriages. The dishes are also very original - the low-alcohol spirits and the non-alcoholic drinks can be served in the drip-bottle, and the strong drinks - in the real syringes.

The real medical supplies were used in setting up the thematic restaurant. The restaurant DS Music is a must to those guests, who are not afraid and disgust of eating at the real surgical table. In the original restaurant there are no ordinary chairs, which are replaced by the sick beds and wheelchairs.

A very … Read all 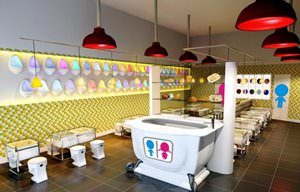 No sooner will the rational man ever come to the feast in the toilet. However, this idea does not seem so illogical and unfulfillable. And thanks to the modern bathroom in the city of Xin Gao. Its fashionable and colorful hall is more reminiscent of the WC. The traditional tables are replaced by baths with transparent glass plate, and the chairs - by the ordinary Klobecken.

The dishes and the dining room in this original restaurant corresponds to the general theme. The ordinary bowls for soup are replaced by bowls in the shape of the bowl. The drinks are served in the glasses, which look like an ordinary pissoir. There are currently 11 themed restaurants in Taiwan. The 'toilet restaurant' can also be found in popular Taipei. And recently, the first restaurant outside the country, opened … Read all
All unique sightseeing Taiwan

Famous sites of culture and history of Taiwan in photoset

Culture and monuments in popular cities of Taiwan

Taipei
The world-famous museum is hardly the city's only cultural establishment interesting for visiting. The Hwa Kang Museum invites visitors to see works of modern sculptors and artists, while the National Museum of History presents a rich collection of artifacts from different epochs. An interesting collection of ethnographic exhibits is stored in the Shung Ye Museum of Formosan Aborigines (Museum traditions Shunyi), and in the private Chem Museum, you can see artworks dating back hundreds of … Read more