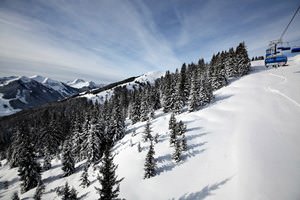 Saalbach's history is inextricably related to Alpine skiing. Despite the fact that people lived on the settlement territory for hundreds of years, it was a small and generally poor village until the end of the 19th century. This place was one of the most unsightly in the whole district of Salzburg. According to local legend, everything changed in 1898. Josef Wallner gave skis to Mr. Bachmann, a Saalbach resident, that year. However, he was not happy with the gift. Just because he had no idea what those strange pieces of wood were for. Fortunately, his acquaintance Peter Hall knew that the hobby of skiing had become fashionable in the neighboring regions of Austria.
Authentic traditions, festivals and lifestyle of Saalbach inhabitants
The vast majority of interesting events are related to sports and physical activity in general in Saalbach and its surroundings. However, what else can you expect from a ski resort? But …

Open
Three lawyers came to Saalbach from Kitzbühel four years later, in 1903. A company of officers who decided to stay at the Gasthof Neuhaus stopped here in 1904. Owners of the establishment were glad to guests who arrived not in a season. And the locals are even more convinced of the benefits of promoting skiing in the village. The first local downhill competitions were held in the town in 1913. Local teachers Ludwig Ramsauer and Hermann Huter established the Ski club in 1914. It had nearly five dozen participants. Alpine shelter for 80 seats was built on the initiative of the club to promote the resort in 1925.
The Maishofen train station began to be called Maishofen-Saalbach in 1927. And the town was named in advertising brochures Das Skidorf - "Ski Village". The surface lift is modern today. It starts in the settlement center, near the Church. The first cable car for the needs of skiers was built on its site in 1946. The funicular on the Schattberg Ost was the most powerful lift in Europe until 2002. It was a local landmark, due to the date of construction in the rather far 1940. But the Schattberg x-press road replaced it today. Copyright www.orangesmile.com
Top hotels in Saalbach for business trip or short vacation
All hotels in Saalbach are attractive and unique in their own way. Berger's Sporthotel has been especially popular with travelers for many years. It is located in the heart of the resort, …

Open
If you are not interested in visiting the places of the first local ski lift or the first guest house that took skiers in Saalbach, you should pay attention to the Parish Church of Saint Nicholas and Bartholomew. It is worth noting that the building is located on a hill. So the rise to it is not easy. But there are good views of the town and the old cemetery, which is located around the Church. The necropolis is interesting. Many of the graves appeared a century ago here. 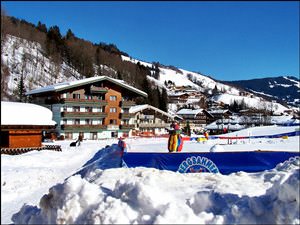 The Church is built in Baroque style. The open balconies (χορός in Greek), rising strongly above the main nave, are a striking feature in the interior decoration. The nave is rather low. And the semicircular space for the balcony (χορός in Greek) is spacious and illuminated by long lancet window cut into the walls. The open balconies (χορός in Greek) are topped by a pointed dome. The crypt and a small ancient underground chapel are located below them. The interior style corresponds to the architectural plan of the Church builders. It is made mainly in the Baroque style.
Winter vacations, ski slopes and resorts in Saalbach
The resort area Saalbach - Hinterglemm - Leogang is considered as a coherent whole. Furthermore, most of popular ski routes and lifts start exactly on the territory of Saalbach. The total …

Open
There are three altars in the Parish Church of Saint Nicholas and Bartholomew. The oldest of them was made in 1691. The other altars, including the main one, are four decades younger. They were fully completed only in 1730. The pulpit was also made in 1730. The modern Church was built on the foundations of a medieval structure. The lower tiers of the bell tower were made during the popularity of Austrian Gothic style architects. They have survived from this time. However, the bell tower did not exist long in an unchanged form. It was greatly increased in size in the 17th century. A rather elegant semicircular dome, generally characteristic of the Baroque of this region, was erected over the bell tower in 177. 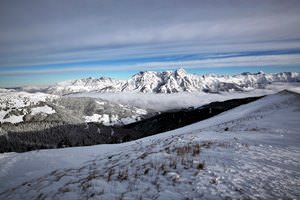 Der Talschluss can be considered a real attraction, although it is a little unusual. It is quite a long and the highest hiking route in Europe. It passes over a huge bridge, located at the level of the treetops crowns. In fact, Der Talschluss is a huge bridge, partly wooden, partly steel, with suspended elements, passing over the forest, several small rivers and past the local peasant farmsteads. People who are afraid of heights are unlikely to feel comfortable here. But the photos from the bridge are beautiful. In addition, there is an opportunity to observe how the locals cut down the forest and graze animals.
Shopping in Saalbach - main shopping streets, outlets and boutiques
The purchase of ski equipment in Saalbach is a good idea. There are nearly three dozen sports equipment stores here and in nearby Hinterglemm. Their products fit any preferences, size, and …

Open
Saalbach has not changed much over time. Many local houses and hotels have survived since the turn of the century. So it is worth a walk around the town at least for a couple of hours, considering the typical Austrian houses. If you want to plunge into the mystical atmosphere of medieval Austria, it is worth spending a day or two on a trip to Salzburg. The city is located nearby. And if you want, you can go not by bus, but as part of an excursion group. They are organized regularly in Saalbach.

In the section below, you can get one of our excursion, activities or city discovery tours over Saalbach and surroundings. Our website offers 10-30% lower ticket prices, when compared to the offline purchase on the spot.

This guide to cultural sights Saalbach is protected by the copyright law. You can re-publish this content with mandatory attribution: direct and active hyperlink to www.orangesmile.com.
Saalbach - guide chapters 1 2 3 4 5 6 7 8
Reference information
Map of all palaces

Public palaces near Saalbach
♥   Palace 'Alte Residenz' Salzburg, 55.5 km from the center. On the map

Cathedrals and basilicas near Saalbach
♥   Wallfahrtsbasilka Maria Plain, Bergheim bei Salzburg, 59.1 km from the center. On the map

Photogallery of cultural heritage of Saalbach

Excursions over cultural sights of neighbours of Saalbach

Kaprun
In Hohenwarter Park you will find Kaprun Historical Museum - the place housing lots of priceless exhibits and the most visited cultural center in the city. Its exposition is devoted to the most significant events the commune has ever experienced. The age of some of the exhibits is more than 500 years. Of particular interest is a natural science exposition, as well as a ... Open »
Kitzbuhel
Kitzbühel offers an interesting cultural program, which, for sure, envisages visiting unique natural attractions, historical sites and museums. For travelers who come to the city in the period from May to September it would be interesting to visit the Alpine Flower Garden. It is located in the mountains, at an altitude of 1,800 meters above sea level. At the botanical garden ... Open »
Kirchberg in Tirol
For example, there is a half-timbered house with a mansard roof, built in the 18th century. People still live in it. The local post office building is also interesting. It was built in the 19th century and has existed unchanged since then. The Order of Poor Clerics Regular of the Mother of God of the Pious Schools, also known as piarists, deserves attention. It was quite an ... Open »
Salzburg
Salzburg is home to numerous unique historical attractions. The beautiful Hellbrunn Palace never ceases to attract tourists. The famous place of interest was built in the middle of the 16th century. Hellbrunn Palace is surrounded by a lush garden on all sides. By the way, on the territory of the garden are found several water springs. This important discovery has allowed the ... Open »
Mayrhofen
One of the most attractive and stylish symbols of the town is open in the very heart of Mayrhofen. This the remarkable fountain of Europabrunnen. Famous Tyrolean sculptor Elmar Kopp worked on the design of the landmark. The opening of the fountain was a very symbolic and important event in the history of the town. Europabrunnen has six streams that symbolize six main ... Open »
Tirol
An interesting old monastery is situated in Schwarz; its walls house priceless works of great masters of the 18th century. Fans of exciting excursions should definitely visit the city of Landeck, where the medieval fortress is situated. The fortress features an ancient chapel with an abundance of religious artifacts and spacious rooms housing the museum. Legendary Hofburg ... Open »

Culture guide to Saalbach. Which fascinating sights to visit once you are in Saalbach: temples, churches, museums, theaters and castles. Recommendations (with addresses, phone numbers and links) on the places 'must visit' in Saalbach. Plan your own city excursion by using this page info!