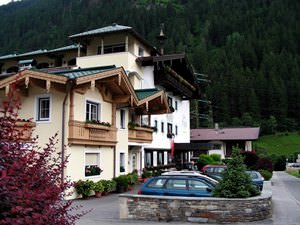 Beautiful Mayrhofen is not deprived of some historical charm. Despite the size, there are many landmarks and symbolic places in this town. Some places are truly unique and it’s not possible to see something similar in any other place in the world. The White Lounge

complex is one of such places. This landmark looks like a small village with houses made of snow. White Lounge is an unusual hotel complex, so it’s possible to stay in any of these houses. It’s important to mention that this place is incredibly popular, so, as a rule, the houses are booked for many days in advance. White Lounge is open in winter only as not only the houses but also all items inside them are made of snow and ice. Travelers, who prefer to stay in more comfortable places, can simply spend some time in the bar that is open in one of the houses. Everything in the bar is made of ice.
Photogallery of White Lounge:

Guide to Mayrhofen sightseeing - things to see and to visit
Mayrhofen is one of the most attractive Tyrol towns. It’s an ideal vacation destination. This is also the largest ski resort in the territory of the Zillertal. The population of the …

Open
There are also some unusual and interesting architectural landmarks in the resort, such as Karg-Haus

. This building is located in one of the central streets of the town – Scheulingstraße. Karg-Haus is the result of work of Patricia Karg, famous artist and designer. The building has an unusual round shaped façade painted in bright colors and has virtually nothing in similar to classic houses that surround it. Currently, Karg-Haus is home to numerous popular restaurants and bars, as well as famous shops that are very popular with shopaholics.
One of the most attractive and stylish symbols of the town is open in the very heart of Mayrhofen. This the remarkable fountain of Europabrunnen. Famous Tyrolean sculptor Elmar Kopp worked on the design of the landmark. The opening of the fountain was a very symbolic and important event in the history of the town. Europabrunnen has six streams that symbolize six main municipalities of Europe, which merged in 1956. This is not the only gorgeous fountain in the town. The history of Marienbrunnen is no less interesting. Locals call this fountain “the well of Mary”. Marienbrunnen is located not far from an ancient church. It is believed that the first wooden well appeared yet in the 14th century on the site of the modern fountain. Later, the wooden well was replaced with a big stone well. Nowadays, it’s an incredibly attractive place with a beautiful fountain decorated with gorgeous sculptures. In accordance with an old charming legend, locals saw the image of Virgin Mary in the well several times. Therefore, it was believed that the water from the well had healing properties. Until 1876, the old well worked and provided locals with clean water. It’s a miracle that it has managed to survive through centuries and endure many tragic events in the history of the town. Copyright www.orangesmile.com
Top hotels in Mayrhofen for business trip or short vacation
Mayrhofen will not disappoint travelers who are interested in staying at high-class hotels. Alpendomizil Neuhaus remains one of the most popular hotels in the town. It is open in the very …

Open
Parish Church of Mayrhofen is also one of the most outstanding historic landmarks of this region. The first church appeared on the site of the modern building yet in the 14th century. During its long history, the church suffered from a fire several times. The latest extensive renovation of the church took place in 1740. Nowadays, visitors of the church can admire skillfully made wall paintings of the 18th century. The magnificent handmade altar is no less attractive. 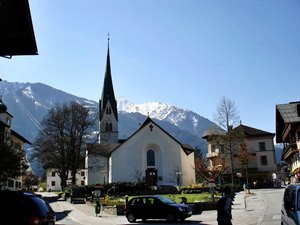 These are not the only historical landmarks in the town. Any visit to Mayrhofen would be incomplete without a visit to the Brindlang water mill. It was constructed yet in the 18th century, but the mill stopped working only approximately 60 years ago. The mill is in perfect condition even after a century and a half after its construction, so it’s understandable why it’s so popular with tourists. Immediate suburbs of Mayrhofen are also rich in interesting places worth visiting, and the ancient Strasser Häusl

mansion is definitely one of them. This place has managed to preserve not only its original attractive look but also the inimitable atmosphere of the past. During an excursion to the mansion, visitors will learn much about the interesting and sentimental story about the Strasser children. The landmarks mentioned are, actually, just a small part of wonderful places of interest that Mayrhofen is famous for.

In the section below, you can get one of our excursion, activities or city discovery tours over Mayrhofen and surroundings. Our website offers 10-30% lower ticket prices, when compared to the offline purchase on the spot.

City tours, excursions and tickets in Mayrhofen and surroundings

This guide to cultural sights Mayrhofen is protected by the copyright law. You can re-publish this content with mandatory attribution: direct and active hyperlink to www.orangesmile.com.
Mayrhofen - guide chapters 1 2 3 4
Reference information
Map of all palaces

Public palaces near Mayrhofen
♥   Palace 'Schloss Ambras' Innsbruck, 34.2 km from the center. On the map

Cathedrals and basilicas near Mayrhofen
♥   Basilika Mariathal, Kramsach, 31.9 km from the center. On the map

♥   Basilika of St. Benedikt, Benediktbeuern, 69.2 km from the center. On the map

Unique spots in Mayrhofen and near

Distance from Mayrhofen center - 68.6 km.
In clear weather beautiful views of the Zugspitze, the highest mountain in Germany, can be admired. Alpspix observation deck is available all year round. Thanks to its unique shape, you can see spectacular scenery, invisible from other places. Despite the fact that the observation deck is very popular among travelers, it has a number of opponents. After its opening, group of climbers, which has chosen this venue for the annual training, said that this massive construction only spoils the perfect mountain landscape. According to them, the only way to enjoy beauty of these places is to conquer one of the mountain peaks. … Read further

Distance from Mayrhofen center - 0.3 km.
Severe shocks, breaks and contortions - so only the most harmless consequences the inexperienced skiers can get after the impetuous and short descent. The world-famous sportsman Tobias Fankhauser was one of the first to take advantage of the 'black' course and to use it for regular training sessions. He held the successful descent to 'Harakiri' piste for the highest sports performance. Today, many coaches are working on the health resort, which prepare athletes and anyone interested in the descent on one of the most difficult ski runs. … Read further

Rosewood Hotels and Resorts will open its first hotel in Rome. One of the leading luxury chains in the world will have a hotel that is located not in one but three historic buildings in the Italian capital. Overlooking the legendary Via Veneto, Rosewood Rome will occupy the former headquarters of Banca Nazionale del Lavoro (BNL). The project is due to be ready in 2023.

Photogallery of cultural heritage of Mayrhofen

Excursions over cultural sights of neighbours of Mayrhofen

Tirol
An interesting old monastery is situated in Schwarz; its walls house priceless works of great masters of the 18th century. Fans of exciting excursions should definitely visit the city of Landeck, where the medieval fortress is situated. The fortress features an ancient chapel with an abundance of religious artifacts and spacious rooms housing the museum. Legendary Hofburg ... Open »
Innsbruck
Golden Roof is one of the symbols of the city. The roof decorates a beautiful historical building of the 15th century. On the facade of the building you will see an amazingly elegant painting depicting the royal family. The roof of the former imperial residence consists of 2738 gilded tiles. Nowadays the building houses the exhibition of Historical Museum. You should definitely ... Open »
Fulpmes
Parish St. Vitus Church should be noted as one of the historical symbols of the village. It was built in 1746 and was named after the saint martyr from Sicily who, according to the legend, went here in the 11th century. He had to face a lot of hardships due to his Christian faith but he underwent all of them with dignity and remained safe. Residents of Fulpmes have long ... Open »
Kirchberg in Tirol
Superstitious Kirchberg residents soon found building materials that had been stolen by birds. They lay on the top of one of the hills. The locals interpreted this as an order of the Almighty to build a new Church on this site. The Church of St. Ulrich is located there today. Modern citizens believe that it protects the town from harm and brings people good luck in business. ... Open »
Kitzbuhel
Kitzbühel offers an interesting cultural program, which, for sure, envisages visiting unique natural attractions, historical sites and museums. For travelers who come to the city in the period from May to September it would be interesting to visit the Alpine Flower Garden. It is located in the mountains, at an altitude of 1,800 meters above sea level. At the botanical garden ... Open »
Seefeld in Tirol
No less interesting religious landmark is the Seekirchl Church (Zeekirhlyayn Church) - a beautiful Baroque-style monument. According to historical data, the construction of the miniature church began as early as 1629 by order of Leopold V and was finally completed only by 1666. The shrine was built specifically to hide an amazing relic within its walls - a miraculous cross, ... Open »

Culture guide to Mayrhofen. Which fascinating sights to visit once you are in Mayrhofen: temples, churches, museums, theaters and castles. Recommendations (with addresses, phone numbers and links) on the places 'must visit' in Mayrhofen. Plan your own city excursion by using this page info!