Active vacation in Philippines - things to do, entertainment and nightlife 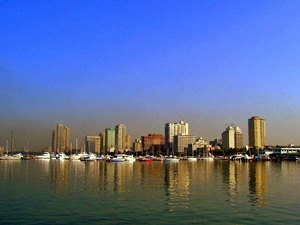 Filipinos are very musical people who like to have fun. Nightlife is very active and rich on the islands. It is most developed in Manila and Cebu. The most interesting places in Manila are concentrated in the districts of Malate, Quezon City, and Bonifacio Global City. There are a huge number of bars, jazz clubs and karaoke on Tomas Morato Avenue and Burgos Street. You can have fun there. You should visit the 70's Bistro. If you are a fan of hip-hop, then visit the disco of the Bureau. Conway's Bar is a pretentious place with good music. Dolce also deserves attention. This is a dance club with a strict dress code. You can also have a good time at the Embassy Super Club. This is a popular night club with dance music. Rich people and celebrities prefer expensive Encore Superclub. Kipling's cigar bar is also noteworthy. Gambling is also legalized in the country. Therefore, there are many casinos in Manila. The nightlife of the islands is represented by beach bars, clubs, and beach parties. It is particularly diverse in Cebu.
For active traveler - national parks, landscapes and nature of Philippines
More than 7,000 Philippine Islands are located in the tropical marine climate zone. Summer, characterized by heat and dry weather lasts from January …
Read further
There are many interesting rock formations in the Philippines. Some of them are sheer cliffs in the sea. These places attract rock climbers who are fans of adrenaline. The rise to such rocks sometimes even requires special equipment. You can visit the following places for rock climbing: rocks near the town of El Nido and in the bay, Wawa Gorge, Illy Cave, mountain on the island of Palawan, rocks near the village of Kontabako on Cebu Island, rocks in the vicinity of Sagada. The rocks are mostly composed of limestone. There are many sharp edges and ledges on them. Therefore, climbing requires special skills here.
More than 7,000 islands are part of the Philippines. The landscape is varied. There are many rocks and extinct and active volcanoes here. This makes the Philippines a popular trekking destination. The Pinatubo volcano last erupted in 1991. Its caldera is filled with water today. The climb to its top takes several hours. Another popular route leads to Mount Anawangin. It includes a visit to the cave. Trekking through the Cordillera is very picturesque. The most popular route includes visiting the Banaue rice terraces. This is a real miracle of engineering and irrigation thought. Ledges lead to the top of the hills. They are especially beautiful when the rice begins to sprout. This makes the landscape an emerald green. Terraces filled with water are also beautiful. Trekking participants in the Cordillera often visit the village of Sagan because of the unique caves with lava formations located nearby. Copyright www.orangesmile.com
Unique sights of Philippines from our series 'Extreme places on Earth'
These spots really worth the attention of a real traveler-researcher. …
Read further
Hiking is popular in the Philippines. It does not require special training. Nagkalit-Kalit Falls, El Nido, Hibok-Hibok Volcano, Tirad Pass, which includes routes of different difficulty levels, Taal Volcano, Buntot Palos, and Ambon Ambon Falls are among the popular routes. 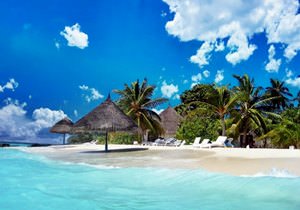 The Philippines is a great place for divers. Marine fauna is represented by more than 2000 species of fish. The warm sea and clear waters make diving extremely exciting here. The period from March to June is the best time for diving. There are many places for good diving in the Philippines. The Tubbataha coral reef is located in the Sulu Sea. The surface part of the reef is two uninhabited atolls. Many sea creatures are found on coral walls that abruptly drop off into the depths. It is very convenient to observe them in such places. The entire reef is protected by UNESCO. Malapascua Island is washed by the Visayan Sea. It is not recommended to engage in diving for the faint-hearted persons here. It is quite possible to meet a shark every dive here. There are more than 20 dive clubs on the island despite its small size. There is a special type of diving in the municipality of Coron. This is the so-called Rec-diving (from the word "shipwreck, wreckage"). The wreckage of a dozen ships lies at a shallow depth in coastal waters. They were flooded during World War II.
Philippines sightseeing - top places to visit
The Philippine islands are well known as a popular beach resort, but the archipelago can be proud not only of its beautiful nature because this …
Read further
You can go snorkeling near Moalboal in Cebu. The opportunity to swim next to a huge flock of sardines or even swim through it is a distinctive feature of diving here. In addition, you can find at least two species of shark in these waters. This is a hammerhead shark and a whale shark. A special type of entertainment is offered in the village of Oslob. This is swimming with whale sharks. These fish can reach 20 meters in length. They are the largest in the world. They feed on plankton. These sharks are not dangerous to humans despite their terrifying size. Sharks are lured with food from boats. Tourists in masks and swimming vests swim between them at this time. It is forbidden to touch animals. Early morning is the best time for swimming. There are few tourists, and the sea is calm at this time. 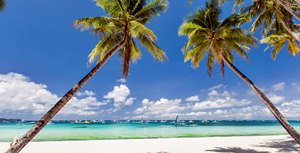 Rafting has only recently started to develop in the Philippines. But this is a very promising direction. The terrain is conducive to this. Rafting opportunities depend on the fullness of the rivers. Rivers are mostly mountainous here. But they become low-water if there is a long absence of rain. Cagayan de Oro is almost the only place where you can go rafting today. It is a city in the Misamis Oriental Province. There are several companies that provide this service here.

This article about active leaisure, entertainment, recreation and attractions in Philippines is protected by the copyright law. You can re-use the content, but only under the condition of placement of an active link to www.orangesmile.com.
Philippines guide chapters 1 2 3 4 5 6 7 8 9 10 11

National and city parks of Philippines
♥   National Park 'Biak-na-Bato' . On the map 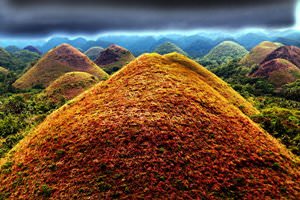 On Bohol Island, which belongs to the Philippines, there is a wonderfully beautiful place - the chocolate hills. On the territory of the extensive tropical forest, a few hundreds of hills rise, reminiscent of the giant chocolate truffles. For many years, the mysterious hills have been one of the most unusual sights of natural origin on earth. Until now, the scientists are unanimous about the version of their show. The locals connect a lot of the interesting legends with the chocolate hills.

The exact number of hills is unknown. According to some data, there are from 1 500 to 1 700 hills. With a view to the fact that the surface of the picturesque island forms 50 sqkm, this dense arrangement of the hills seems really strange. The height of the hills is different and forms from 30 to 121 … Read all 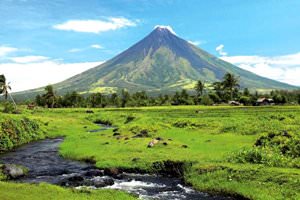 Active Mayon volcano is situated on Luzon Island, which is part of the Philippine archipelago. It features not only an increased pace of activity, but also a very unusual shape close to the perfect cone. The volcano has being officially monitored last 400 years, during this time more than 50 major eruptions have happened. Height of the volcano is about 2,460 meters, but it changes after each eruption. The length of volcano’s base is about 130 kilometers.

One of the most serious eruptions of Mayon volcano occurred in 1814; it claimed lives of 1,200 people. As a result of the disaster, Cagsawa town located in the foothills of the volcano has been completely destroyed. In 1993, disaster has repeated killing 79 people; during the next eruption several small settlements were wiped out from … Read all
All unique sightseeing Philippines

Entertainment, recreation and attractions in cities of Philippines

Manila
Travelers seeking for a quieter and more amiable atmosphere will love the San Mig pub. It is an established place of meeting of big companies. The pub is most in demand not only among city visitors but among local folks as well. Manila also offers great entertaining and challenging facilities for gamblers. The most popular gambling center is considered to be the Filipino Pavilion casino. The casino operates 24/7 and offers its guests several halls with various games played. The same attractive … Read more