The starting point of most sightseeing routes is Grote Markt. This historic square is striking in its calm atmosphere, it is never too crowded here, so nothing prevents you from admiring the historic buildings around it. Several restaurants and cafes located nearby always set their tables outdoors in the warm season. The city's most important holidays and festivals take place in the main city square. Fairs and performances are held here regularly.
Advices to travellers: what you should know while being in Mechelen
1. Mechelen can be easily reached from nearby Brussels or Antwerp. There are regular regular rail and bus services between these cities. 2. The city is famous for the variety of …

Open
Near the square, you can find the old City Hall - Stadhuis van Mechelen. It is a sophisticated architectural complex consisting of three buildings of the 15th-16th centuries. At the beginning of the 20th century, they were completely restored and combined into a single building that has been used as a city hall since 1914. The City Hall building is open for tours on certain days. A valuable collection of artworks and antiques has been preserved in the historic buildings.
A spectacular architectural monument of the Renaissance is Paleis van Margaretha van Oostenrijk, a palace built by the order of Margaret of Austria. The construction of the palace lasted over 15 years and was completed in 1530. After the death of its owner, the luxurious building became public property. It was used for various administrative purposes, and at the end of the 19th century, the palace underwent its first major reconstruction. Now it houses the main city court. The original design of the facade makes the palace one of Mechelen's most remarkable historic buildings. Copyright www.orangesmile.com
Extraordinary weekend in Mechelen - unusual places, services and attractions for travel gourmet
…

Open
A vivid architectural monument in the Renaissance style is the Hof van Busleyden, which currently houses the eponymous museum. The beautiful tiled-roof house built in the second half of the 15th century was originally owned by one of the wealthy local politicians. After the death of its owners, it was occupied by a bank that operated until the outbreak of the First World War. In the war period, the old building was almost completely destroyed but subsequently restored in accordance with the historical project by 1938. After the reconstruction was completed, a museum was opened in the building, which now houses an interesting collection of ethnographic, archaeological and historical exhibits. The main value of the museum is 16th-century frescoes that miraculously survived the destructive war. Near the museum is a beautiful garden, which is used for holding various cultural events in the warm season. 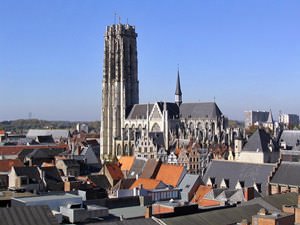 Mechelen has a unique historical monument of world significance - the Groot Begijnhof Mechelen. This beguinage was founded in these places in the 13th century as a separate neighborhood where single women lived. One hundred years later, it became a small town with about a hundred houses. More than one and a half thousand women lived in it by that time. In the 16th century, the large commune was destroyed by the townspeople and the beguines had to leave their homes. Soon they returned to restore the commune and bought a large plot of land within the city boundaries. Today, the complex of unique historic buildings is included in the UNESCO World Heritage List.
Shopping in Mechelen - main shopping streets, outlets and boutiques
Mechelen cannot offer an abundance of large shopping centers, but there are many small interesting shops here. On the main city square, you will find a large Het Mechels gift shop where they …

Open
The city has preserved many ancient cathedrals and churches. Mechelen's main religious attraction is Sint-Romboutskathedraal. The construction of the cathedral began in the 13th century. In the first years of its existence, it repeatedly suffered from fires and underwent many reconstructions. In the middle of the 16th century, Mechelen was officially recognized as an archiepiscopal center. During this period, the cathedral was expanded significantly. Now its building is striking with its incredible scale - the area of the cathedral is 3,870 square meters. 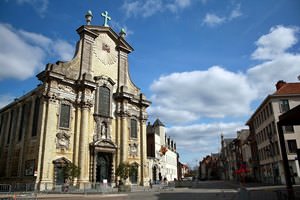 It has preserved the unique interiors of past centuries, and elements of Gothic decoration are of special interest. The main decoration of the cathedral is a baroque altar made in 1665. For tourists, one of the most attractive elements of the cathedral is its tower with an observation deck on the top. There are two medieval carillons in this tower, many people gather to listen to the sound of unique musical instruments. The 15th-century Sint-Janskerk has been preserved in the historical district of Mechelen. A rich collection of ancient artworks and important religious artifacts are currently stored within its walls.

In the section below, you can get one of our excursion, activities or city discovery tours over Mechelen and surroundings. Our website offers 10-30% lower ticket prices, when compared to the offline purchase on the spot.

City tours, excursions and tickets in Mechelen and surroundings

This guide to cultural sights Mechelen is protected by the copyright law. You can re-publish this content with mandatory attribution: direct and active hyperlink to www.orangesmile.com.
Mechelen - guide chapters 1 2 3 4 5 6 7 8 9
Reference information
Map of all palaces

Public palaces near Mechelen
♥   Palace 'Royal Castle of Laeken' Brussels, 18 km from the center. On the map

Art galleries in Mechelen and around
♥   Art museum 'Royal Museum of Fine Arts' Antwerp, 20.2 km from the center. On the map

♥   Art museum 'Cinquantenaire Museum' Brussels, 22.2 km from the center. On the map

Cathedrals and basilicas near Mechelen
♥   Sint-Servaasbasiliek, Grimbergen, 13 km from the center. On the map

♥   Basilique Nationale du Sacré-Cœur, Koekelberg, 21.2 km from the center. On the map

♥   Onze-Lieve-Vrouwekathedraal, Antwerpen, 21.3 km from the center. On the map

♥   Collegiale Sint-Michiels- en Sint-Goedele-co-kathedraal, Bruxelles / Brussel, 21.9 km from the center. On the map

Photogallery of cultural heritage of Mechelen

Excursions over cultural sights of neighbours of Mechelen

Antwerpen
During an excursion to Maritime Museum visitors can learn much interesting about the development and establishment of the local port area. The location of the museum is also very interesting – you will visit a beautiful Steen Castle, so this place of interest is attractive not only as a museum but also from an architectural point of view. The museum’s collection consists of ... Open »
Brussels
Beautiful Cathedral of the Virgin Mary, built in the early 14th century, is an important historical landmark of the city. Its walls are home to old statues. Many interesting legends are connected with these statues and you will definitely hear them during your excursion. Church of Sacre Coeur is one of five largest religious monuments in the world. The building of the church ... Open »
Leuven
In the southern part of Leuven there is a landmark of world importance - Groot Begijnhof. Here you can see the beautiful ancient basilica, as well as preserved 16th-century buildings. For a long time they were in disrepair; today one of the buildings of the Catholic University is situated here. Continuing the theme of religious sites, it’s necessary to mention Collegiale ... Open »
Gent
Belfry is one of the main sights of Ghent and a true symbol of prosperity and independence. The height of the bell tower estimates 91 meters. The construction of the old tower was completed in 1338 and lasted more than 30 years. Korenlei embankment is a great place for evening walks. You will see many beautiful old mansions as you walk down it. Among the religious ... Open »
Breda
There are several interesting landmarks in the central part of Breda. For example, here guests of the city will find Grotekerk, one of the most famous churches in the region. The gorgeous cathedral was built in the 15th century. Its territory has become a graveyard for many famous citizens of the city, counts, and barons. The main square of the city is just a few steps away ... Open »
Eindhoven
The Kempenland museum's collection is devoted to the history of the city; among its exhibits there are replicas of castles and fortifications that have been located in the vicinity of Eindhoven several hundred years ago. Much of the historical buildings were destroyed during the Second World War, but several amazing buildings have still preserved there. A walk around the city ... Open »

Culture guide to Mechelen. Which fascinating sights to visit once you are in Mechelen: temples, churches, museums, theaters and castles. Recommendations (with addresses, phone numbers and links) on the places 'must visit' in Mechelen. Plan your own city excursion by using this page info!