Sightseeing in Male Atoll - what to see. Complete travel guide 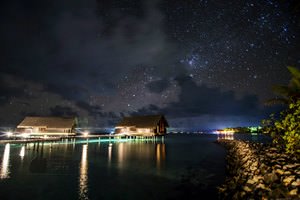 North Male is the main atoll of the Maldives. This is where the capital of the republic, Malé, with its priceless attractions, cultural centers and luxury hotels is situated. The atoll comprises of 50 islands, of which only 8 are inhabited. It’s noteworthy that each island has its own unique task: there is the island-capital, the airport island, the poultry farm island and even the island-pantry storing fuel reserves. The atoll is known primarily as a popular beach holiday place, but fans of excursions won’t be bored there.
Excursion over cultural sights of Male Atoll - 'must visit' points of interest
All the main sights of the Maldives are right here on North Male Atoll; and, certainly, the major amount of it is in the capital. So, one of the must-visit places is the Sudan Palace. This …

Open
Much of the important tour facilities are concentrated in the state capital, the city of Male, which in itself is a landmark of global importance. It’s one of the smallest capitals in the world occupying less than 2 square kilometers, so you can easily get around on foot in just 30 minutes.
The main symbol of Male and the oldest building on its territory is the beautiful mosque Hukuru Miskiity built in the 17th century. Blocks of coral were used for construction; the forefront is decorated with exquisite Arabic script. The mosque looks unique and is considered not only the oldest, but also the most beautiful architectural monument of the capital. The interior of the mosque is also amazingly luxurious, there you can see a huge hand-woven carpet and a lot of jewelry. It should be noted that the mosque has a rather impressive scale, so it can accommodate more than 5,000 people at the same time. Copyright www.orangesmile.com
Your active city break in Male Atoll. Attractions, recreation and entertainment - best places to spend your day and night here
North Male Atoll offers its guests perfect conditions for water sports and beach vacation. For example, it’s, of course, diving. There are several wonderful marine reserves in the …

Open
The most striking architectural monument of the 20th century is Theemuge, an iconic building with a facade of white and blue. It was built for the last sultan of the country; not only the building itself, but also the surrounding beautiful garden has managed to survive. Part of the historic building belongs now to the National Museum introducing amazing and diverse culture of the indigenous population to visitors. 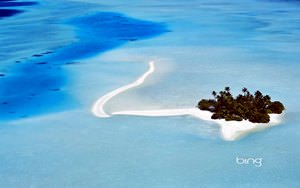 A very interesting exhibition of the Museum of Male represents priceless archaeological artifacts. Here you can see ancient Buddhist statues that adorned temples a thousand years ago, and one of the most interesting sections is the collection of thrones that once belonged to local sultans. Esjehi tour gallery is another interesting object, it’s home to artisan workshops. The gallery regularly hosts interesting exhibitions and workshops, so it’s a popular place to search for souvenirs.
Advices to travellers: what you should know while being in Male Atoll
1. There are always holidays on North Male Atoll. It’s always warm here, and you won’t be trapped in your hotel room even during the rainy season, as it pours only in the night …

Open
Barbary shrine is notable among interesting attractions. That’s the tomb of the famous traveler Abdul Barakat Yoosuf Al Barbary. It’s believed that he brought the culture of Islam to local islands. Speaking of outstanding things of Male, it’s impossible to miss the local market. This is a busy place with an amazing atmosphere, where you can fully experience the distinctive and harmonious way of life. 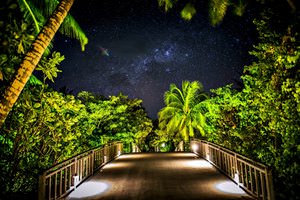 North Male Atoll is famous for its gorgeous beaches that are not only attractive but also spacious. Despite a great number of vacationers and numerous boats, water is always clean near the island. Many beaches are surrounded by fabulous palm tree groves. There are coastal areas suitable for trouble-free beach recreation and scuba diving. The atoll is also famous for its rich marine fauna.
Best beaches and recreation areas around Male Atoll
Almost all islands of the atoll are available for beach holidays. Territory of some small atolls is fully occupied with hotel complexes, so some beaches are accessible only to hotel guests, …

Open
A large part of the beaches is owned by hotels, there are just a few public beaches on the atoll. Vilingili is an uninhabited island that has one of the best public beaches in the region. It is easy to reach it by boat. The beach always has many locals who like to relax there. Tourists visit this island for one more reason – to explore the beautiful local nature. There are several interesting underwater sights close to North Male Atoll, so this place attracts divers from all over the world. 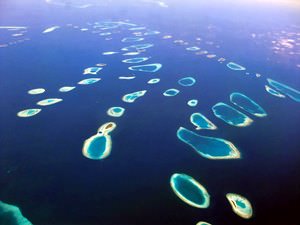 Numerous fans of scuba diving come to explore sunken ships, some of which have been left untouched for more than a century. The Seagull steamer is one of the most interesting sites. The watercraft sank near the atoll in 1879. There are two more sunken ships nearby, namely, Erlangen and Lady Christine. They also sank at the end of the 19th century. Coastal waters of local islands have many coral reefs that have caused many shipwrecks. As it was technically and financially hard to bring those sunken ships back to the land, they remained to lay underwater and turned into true tourist landmarks.

This guide to iconic landmarks and sights of Male Atoll is protected by the copyright law. You can re-publish this content with mandatory attribution: direct and active hyperlink to www.orangesmile.com.
Male Atoll - guide chapters 1 2 3 4 5 6 7 8 9 10

City tours, excursions and tickets in Male Atoll and surroundings

Sights around Male Atoll from our guide 'Extreme places on Earth' 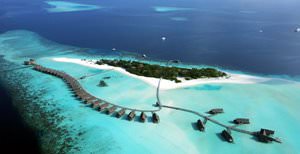 Distance from Male Atoll center - 59.5 km.
The massive wooden furniture colonial style, the natural fabrics, the small craftsmanship of the local masters and the white walls - such a facility helps to recover from the hustle and bustle of the big cities. The infrastructure of the comfortable island hotels includes the ultramodern spa salon Shambalha, where you can visit the massage and beauty treatment rooms, as well as the special halls for ayurveda treatments and meditation. Near the island is the beautiful coral reef, so the first class diving center is one of the most important elements of the tourist infrastructure Cocoas. … Read further 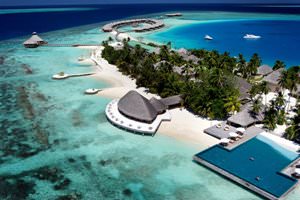 Distance from Male Atoll center - 17 km.
The guests of the wonderful hotel, who like the underwater entertainments, can also visit the unique underwater bar 'Blue' or taste the best wines in the chic underwater dining room. A pleasant surprise awaits the Yogafreunde, who can train not only on the own terraces in the open air, but also in the peculiar underwater water. Huvafen Fushi Resort is a unique island hotel, whose marvelous underwater infrastructure has attracted thousands of curious tourists annually. … Read further

Sightseeing in Maldives: things to see

Beautiful tropical beaches have always been the signature attraction of the islands. The variety of beaches is really big – large public beaches, private beaches, beaches with developed infrastructure like restaurants and shops, secluded beaches and even eco-friendly beaches. Many beaches have scuba diving centres where guests can rent equipment, attend a diving school or join diving groups. … Open 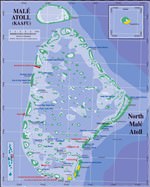 Search touristic sites on the map of Male Atoll

Sightseeing in regions nearby Male Atoll

Maldives Island
Maldives have always been associated with upscale vacations. Archipelago located in the Indian Ocean includes 1190 atolls, where top-class hotels and resorts are situated. Each atoll is the focus of unique natural attractions and charming beaches. Pristine natural beauty can be called the main feature of the archipelago. It's worth noting that local beauty isn’t limited to ... Open »
Colombo
Colombo is one of the largest ports of the Middle Asia. This city is full of unexpected contrasts and is very good for travellers who seek solitude rest. According to one of versions, the city got its name from Christopher Columbus. Today on the streets of Colombo you can see old buildings located near each other and modern business centers made of glass. The culture of the ... Open »
Madurai
India is famous for its marvelous temple city of Madurai that is situated in the southern state of Tamil Nadu. This settlement is considered the oldest continuously inhabited city in India. Madurai has become internationally famous after the building of the Meenakshi Temple. Why is this city often referred to as “the temple city”? There is a shrine on almost every street ... Open »
Kandy
Sri Dalada Maligawa or the Temple of the Sacred Tooth Relic is the main attraction in Kandy. This is not only an interesting place to visit but also a sacred temple that is very important to all local people. When Buddha died and his body was burned, some fragments remained after cremation. These fragments were divided into 8 parts. All of these parts were sent to different ... Open »
Bangalore
“India’s Silicon Valley” – this name is often used when describing Bangalore. The city got this name because of large number of modern plants located on its territory. However, tourists keep visiting this city not because of industrial development of this region, but because of large number of historical and architectural monuments that can be found here. The Cubbon ... Open »
Chennai
The city, first of all is the largest industrial center, which attracts hundreds of business people from all over the world. In India Chennai is called the automobile capital of the country. Besides Indian companies here are located branches of such factories as Mitsubishi, Ford, and Hyundai. The largest factory that produces military equipment is also located here. However, ... Open »

All about Male Atoll, Maldives - sightseeings, attractions, touristic spots, architecture, history, culture and cuisine. Prepare your trip together with OrangeSmile.com - find out the 'must see' things in Male Atoll, which places to visit, which excursions to take, where the breathtaking views are waiting for you. Planning your trip with this travel guide will help your to get the most out of Male Atoll in few days.