Sightseeing in Penang - what to see. Complete travel guide 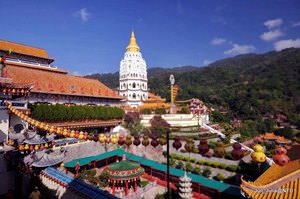 Penang is a great resort for active rest, noisy discos and nightclubs. The northern part of the island is the most attractive for tourists as here you will find most popular restaurants, cafes and modern hotel complexes. Here you can also find large shopping malls, shops and several night markets that are open to visitors 24 hours a day.
Excursion over cultural sights of Penang - 'must visit' points of interest
A major part of spots of tourist attraction on Penang island is concentrated on the territory of the capital of the island George town. However tourists should not limit the exploration of …

Open
The north coast is the location of the most popular beach named Ferringhi Beach. Besides water sports guests can enjoy horseback riding or visiting restaurants located on the beachfront. Here seafood is prepared on an open fire, so all dishes are very delicious and unique. The beaches located on the west coast stand out because of their outstanding natural landscapes. Here forests and parks are mixed with cozy bays, and giant riffs literally slam into the coast and make it look like a wild place that hasn’t yet been discovered.
The main shopping area of the island is the town named Georgetown. It is simply full of spacious market squares where you can buy lots of various goods. There are several craft shops and shops that sell antiques. The most popular local souvenirs are mahjong chips (this game is popular among local residents), and female tourists may be interested in purchasing gloves with their name on them. Copyright www.orangesmile.com
Your active city break in Penang. Attractions, recreation and entertainment - best places to spend your day and night here
Apart from typical for all resorts attractions and entertaining facilities the island of Penang offers its gusts a vast choice of unique ways to spend time. Astonishing scenic nature areas, …

Open
To the service of guests of this place are offered numerous tourist routes. You can go to the butterfly park or botanical garden, visit the temples of Penang, or make a walk in one of the old towns. In Georgetown you will find several museums and exhibition galleries, while nature-lovers should go to one of the parks, where they can sit in shadow and escape from the town’s noise.

One of the island's most interesting historical monuments is Fort Cornwallis built in 1786. This historic landmark is connected with the name of the British captain Francis Light who founded the first European colony on the island. According to historical data, the fortress was built in the very place where the captain and his team first landed on the island. Today, a part of the old building is occupied by a museum. It also houses a variety of souvenir shops and cafes.
Advices to travellers: what you should know while being in Penang
1. Tourists are advised to avoid visiting the island in the period from September to November as the weather on the island is rather rainy and the chance of hurricanes is rather high in this …

Open
A popular tourist attraction is Penang Hill, on top of which is the most famous observation deck on the island. Its highest point is 833 meters. Travelers have several options for climbing the hill: of course, they can do this by car or on foot, but the most interesting option is using the cable car. It has been operating since 1922 and is in itself an outstanding historical symbol. A few years ago, a hotel was opened at the top of the hill, so tourists always have the opportunity to stay here longer. 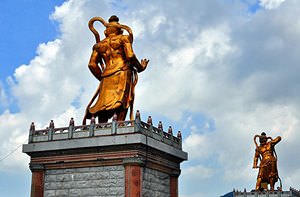 The most famous religious landmark on the island is the Kek Lok Si Temple located in the immediate vicinity of Georgetown. The construction of the magnificent temple began in 1890 and lasted more than 20 years. Since its foundation, it is considered the largest Buddhist temple in Malaysia. The Kek Lok Si is of great architectural value. The temple's exterior and interior decoration miraculously combine traditions of Thai, Burmese, and Chinese architectural styles.
Extraordinary weekend in Penang - unusual places, services and attractions for travel gourmet
…

Open
Another amazing attraction is the Snake Temple. Founded in the middle of the 19th century, it was dedicated to the Buddhist monk named Chor Soo Kong. This monk was a famous healer and animal lover, he gave shelter to all animals that came to his house, including snakes. The main feature of the ancient temple is the huge number of poisonous snakes inhabiting it. Despite such a fact, there were no any snakebite accidents in the temple. Every year, on the monk's birthday, a real miracle happens here - a huge number of snakes from all around the region crawls to the temple. Inside, you'll discover an interesting thematic museum devoted to snakes.

This guide to iconic landmarks and sights of Penang is protected by the copyright law. You can re-publish this content with mandatory attribution: direct and active hyperlink to www.orangesmile.com.
Penang - guide chapters 1 2 3 4 5 6 7

City tours, excursions and tickets in Penang and surroundings

Shopping streets in Penang
♥   Shopping area ' Burma Road' Penang, 5.8 km from the center. On the map

National and city parks around Penang
♥   National Park 'Korbu' , 134.1 km from the center. On the map

Sights around Penang from our guide 'Extreme places on Earth' 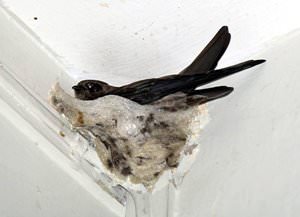 Distance from Penang center - 4.7 km.
With the advent of modern swiftlets breeding business, it has become one of the most profitable and promising sectors of agriculture. 'Swallows’ nests' are described by gourmets as 'white gold'. At present, one kilo of this delicacy costs about 3000 US dollars. Nests are picked on the farm 3 - 4 times a year. In spring nests are snow-white and in a course of construction are always gray-brown due to blood in the saliva of birds. … Read further

There are interesting architectural landmarks in Malaysia, such as Penang Bridge. The length of the bridge is 13.5km, which makes the bridge the third longest in the world. Travellers are also recommended to visit the largest temple in South East Asia – Kek Lok Si. The temple features a mix of several architectural styles. The Temple of Snakes is a no less important religious building. The temple amazes its visitors with its exotic design and very unusual altar. The altar is covered with tenths of dangerous snakes, but despite that all tourists make memorable photos with the altar. The key to this puzzle is simple – all the snakes don’t have poisonous fangs and thanks to a special incense the snakes are very calm and absolutely not aggressive. … Open 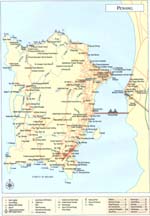 Search touristic sites on the map of Penang

Sightseeing in regions nearby Penang

Langkawi
Langkawi is the zone of free trading, so here regularly take place national and universal fair trades. Many hotels on the island are equipped with facilities for conferences and meetings with business partners. Langkawi is the island with its own legends and sacred places for pilgrims. Tourists may find it interesting to visit Mahsuri tomb, a rice field that once has been ... Open »
Medan
Kualanamu International Airport near Medan opened in 2013. At the moment, this airport serves flights from such destinations as Penang, Kuala Lumpur, Singapore, Bangkok, and Hat Yai. The distance from the airport to the city of Medan is roughly forty kilometers. Having landed at the airport, tourists need to take a train to Medan that will bring them to the city center in ... Open »
Ko Lanta
In the eastern part of Ko Lanta Yai, you'll find Ko Lanta Old city - the archipelago's first capital, which is a great place to explore for all fans of excursions. The busiest area of the city is Saladan Port. A few decades ago, there were numerous merchant ships, life has always been in full swing in the port. The Old City accommodates many beautiful national-style buildings ... Open »
Ko Lanta Island
The most interesting natural landmark, Khao Mai Kaew Caves, can be found in the central part of the island. The site affects with its scale and beauty. One of the beautiful caves features a large lake. Tours into caves of the island enjoy great popularity. Excursions through the maze of caves are arranged by the guide. Each of stone figures is certainly associated with a ... Open »
Kuala Lumpur
If someone thinks the city looks more like a desert, he/she is wrong. Kuala Lumpur simply dives in greenery. Around twenty years ago best landscape designers have created projects of several green parks that have been laid out on banks of the picturesque lake. Today Garden of Orchids, Garden of Butterflies, Garden of Birds, and Garden of Deer are popular city’s destinations ... Open »
Phi Phi Islands
In the southern part of the island there are several rocks and lush tropical forests. One of the rocks is equipped with an observation deck providing a great view of the palm island. Small uninhabited island of Phi Phi Le is a must see place for every diver. There are some beautiful grottoes on the island, which differ not only with their beauty, but also with unique ... Open »

All about Penang, Malaysia - sightseeings, attractions, touristic spots, architecture, history, culture and cuisine. Prepare your trip together with OrangeSmile.com - find out the 'must see' things in Penang, which places to visit, which excursions to take, where the breathtaking views are waiting for you. Planning your trip with this travel guide will help your to get the most out of Penang in few days.