Detailed hi-res maps of Katowice for download or print 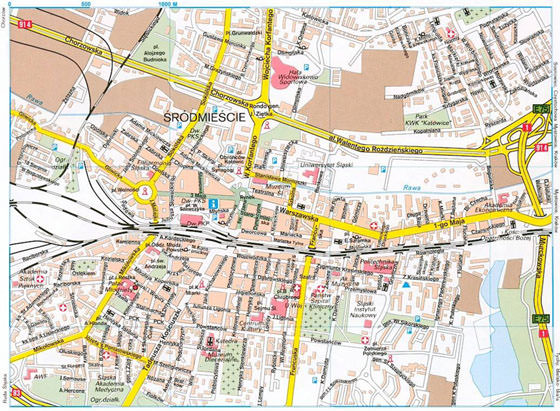 Due to the fact that the whole western part of the country is bordered by the Baltic Sea and channels and rivers are flowing all over the country, water transportation is available, but only in the warm season. There are no regular trips on the main rivers of Poland. This service is available only to cruise boats. You can also go on a ship, liner, yacht or on a boat to cruise along the seacoast. Recently, cycling has been actively developing in the country. The flat terrain of the country contributes to this. You can rent a bicycle in any city. However, only big cities have a modern large network of bicycle paths. Therefore, many tourists along with the bicycle rental are offered to acquire the map of the city. Bicycles can be left in parking lots near hostels and hotels. You can also take them with you when traveling by train. … Open

Poland’s energy sector is also quite profitable. About 90% of electricity is produced at state-owned thermal power plants. The greater part uses coal as fuel, while the smaller part uses lignite. Wind and hydroelectric power plants generate less than three percent of electricity. The country’s oil reserve is about two million tons. However, all domestic needs of the country are being met solely thanks to importation. Also, most of the natural gas is imported, as gas produced in the country is able to meet only a third of domestic demand. Most of the banks that are located in Poland have foreign owners with a huge deposit base. This brings quite a big profit to the country. The banking system is so far strong, stable and continues to improve. … Open

Search for services, infrastructure and sights on map of Katowice

Our guide chapters over Katowice

Supersam is a relatively new shopping center that appeals to both men and women. Ladies will find it interesting to visit numerous clothing stores with attractive prices and gentlemen will be impressed with the choice of items available in Hobby4Men. The shopping center is not big and locals are its main visitors. In order to find interesting and memorable gifts, it is hard to think of a better place than … Open

5. Tourists should keep in mind that exchanging currency using the services of individuals is forbidden. It is considered a serious crime. Do not agree to use the services of unknown people in the streets of the city, no matter how attractive a deal sounds. 6. Katowice is a cozy and quiet city, so it’s safe to walk in its main streets even late at night. However, travelers should not go for … Open

Maps of Krakow
At the beginning of June for two days a year, the old city of Krakow turns into the mysterious oriental place filled with numerous ancient mythical creatures, led by the dragon - one of the symbols of the former capital of Poland. According to the legend, the dragon lived in a cave under the Wawel Hill and, as usual, terrorized the City of Kings. This old city legend was ... Open »
Maps of Ostrava
Specifically for the festival, the city prepares several open-air stages, the largest of which are designed for 15,000 spectators. Dozens of concerts take place on them every day. Also, during the festival, theater performances and master classes in various areas of contemporary art are held in the city. It is noteworthy that children are always actively involved in the music ... Open »
Maps of Brno
Another interesting festival is dedicated to culinary arts. It's about Špilberk Food Festival taking place in Špilberk Castle, as you might guess from the name. Here you can taste traditional local dishes of Moravian cuisine - dumplings, soups in bread, and, of course, beer, without which no holiday in the Czech Republic is complete. You can also sample wines, as well as ... Open »
OrangeSmile.com - online travel reservation expert providing reliable car rental and hotel booking services. We feature more than 25.000 destinations with 12.000 rental offices and 200.000 hotels worldwide.
Secure Server