Sightseeing in Bialystok - what to see. Complete travel guide 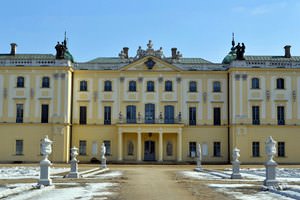 The population of this town mainly consists from Polish and Belorussian people. Bialystok is known by the large number of educational institutions as on its territory you will find 15 colleges and universities. One of the main sights of the town is the Church of the Dormition of Mother of God. This religious sight traditionally attracts many visitors. Other places of interest that may be interesting to visitors are Branicki Palace, the church of Maria Magdalena, Konyushii House, the Church of Saint Vox, the Cathedral of St. Nicolas the Miracle-Worker, the local town hall and more.
Excursion over cultural sights of Bialystok - 'must visit' points of interest
Bialystok and its neighborhoods have much to offer to tourists. There are many unusual places of interest that attract tourists from all over the world to the city. Start your acquaintance …

Open
Bialystok is built on the territory, which has been owned by Mazovetsky princes. Starting from the 30s of the 19th century this place began its quick developing. Among leaders were textile and wool industries. Today these are the main sources for the town’s budget.
There are several hundreds of architectural and historical sites in the town. Many of them are included into the world’s list of most important cultural sights.

Among places that have recently became popular are Bialowieza Forest, marshlands of Biebrza and charming villages located nearby Bialystok. Copyright www.orangesmile.com
Your active city break in Bialystok. Attractions, recreation and entertainment - best places to spend your day and night here
Bialystok is a true treasure for fans of eco-tourism and active pastime. Fans of outdoor activities will be absolutely charmed by breathtaking landscapes of Bialowieza Forest and Podlasie, …

Open
This popular and frequently visited town is traditionally liked by visitors.

In the city there are several magnificent palaces, one of the most beautiful is considered to be Branicki palace. Built in the 17th century, it is a striking piece of architecture in the style of late baroque. According to historical records, the first red bricked castle was build in its place as early as the 16th century. Subsequently, it was destroyed and on its place was built a large palace, which has long belonged to the Branicki family. Like many years ago, the architectural monument impresses with its incredible view. It is surrounded by a large landscaped garden with a variety of interesting jewellery and sculptures. 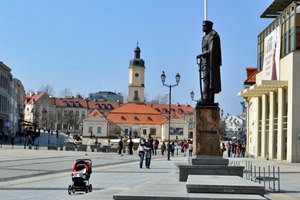 Among the religious attractions of Bialystok Church of St. Roch is worth of mention, it is located at the top of the hill of the same name. Construction of the temple began in 1925, but was unable to be completed before the start of the Second World War. During the war, soldiers' barracks were located in the temple buildings; only by 1945 the Catholic church was finally built. Attitude to the temple differs amongst the locals to this day; in the early 20th century it was decided to build on the site of the old cemetery. Despite the insists of the locals to move the church to another place, their requests were not met. Travellers that enjoy walking around beautiful historic places should take stroll along the Lime Street. Once upon a time this beautiful street was decorated with longest linden alley, however it was unable to survive to the present day. Today, tourists come here to enjoy the beautiful historic buildings, many of which have been converted into hotels and restaurants. Various street fairs are often held here; in the holidays interesting entertainment events are also present.
Advices to travellers: what you should know while being in Bialystok
1. The city has a well-developed public transport system. It is easy to reach any landmark of Bialystok by bus, as well as neighborhoods of the city. As a rule, first buses appear on the …

Open
Nature lovers should definitely go for a tour of the Bebrzhansky national park, which is located in the immediate vicinity of Bialystok. Visitors are prohibited in this nature reserve on their own, as significant portion of its area is occupied by marshes. Walking on the reserved places is allowed only whilst being accompanied by a guide, and some areas of the park are equipped with special wooden bridges. This park is home to many rare animals and birds, but also you can see the fabulous scenery.

This guide to iconic landmarks and sights of Bialystok is protected by the copyright law. You can re-publish this content with mandatory attribution: direct and active hyperlink to www.orangesmile.com.
Bialystok - guide chapters 1 2 3 4 5 6 7 8 9 10

Survived castles around Bialystok
♥   Castle 'Hrodna New Castle' , 75.1 km from the center. On the map

♥   National Park 'Narwiański Park Narodowy' , 20 km from the center. On the map

Search touristic sites on the map of Bialystok

Sightseeing in regions nearby Bialystok

Druskininkai
The resort’s infrastructure changed drastically in the period between the two world wars. This is the time when new sanatoriums were built in Druskininkai. The scientific base of the new establishments developed as well. When the eastern part of Poland was added to the USSR at the end of the 30s of the 20th century, Druskininkai became a part of the Belarus SSR. However, ... Open »
Brest
Located at the intersection of major trade routes, the city developed rapidly, new residential areas, inns and markets were built. Already in the 12th century a powerful wooden castle was built here, designed to protect trade caravans heading to Europe. It was here that two powerful trading tracks crossed, one of which led to the Middle east and the Black Sea region, and the ... Open »
Warsaw
One of the most beautiful city’s parks is named Lazienki Park and it’s located nearby the city’s center. When you decide to walk in this park, don’t forget to visit the Lazienki Palace or the Palace on the Water – one of the biggest cultural facilities of the city. In the palace guests will find magnificent greenhouses, an amphitheater, and several trading pavilions. ... Open »
Olsztyn
Large Polish cities such as Krakow, Warsaw, Sopot, and Gdansk have a well-established bus connection to Olsztyn. Tourists can also reach the Polish city by bus from large European cities, for example, from London, Brussels, Oslo, Stockholm, and Gothenburg. Olsztyn does have an airport but it can serve only small aircraft coming from the neighboring Polish cities. The daily ... Open »
Kaunas
Besides the fact Žaliakalnio district is considered a new part of the city, the majority of buildings there were made in the beginning of the 20th century. In 1931 here was opened a funicular. It works up to our days. Make a walk on the central Laisves Street and you will see numerous wonderful fountains and visit the most popular cultural facility of the city – Museum of ... Open »
Lublin
The so called Old Town of Lublin is one of the most beautiful places where visitors will enjoy the combination of various architectural styles. Numerous stone houses and temples have survived here since ancient times. The historical part of the city is represented by the area between Cracow Gate and the castle. Here are located such sights of Lublin as old Town Hall with the ... Open »

All about Bialystok, Poland - sightseeings, attractions, touristic spots, architecture, history, culture and cuisine. Prepare your trip together with OrangeSmile.com - find out the 'must see' things in Bialystok, which places to visit, which excursions to take, where the breathtaking views are waiting for you. Planning your trip with this travel guide will help your to get the most out of Bialystok in few days.