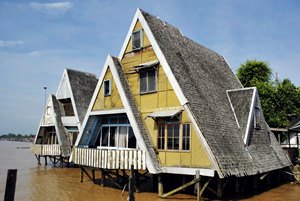 The main landmark of Kalimantan is not the jungles or rare animals and plants. Here, as they did thousands of years ago, local inhabitants of the island – the Dayaks, live in practically primordial conditions. The aborigines themselves don’t like this word, as in Malaysian it means “savage”. However, until quite recently, the Dayaks tribes were bloodthirsty, and that name was justified. The influence of the western culture and, mostly, the influence of the missionaries took the edge of their mood. Now nobody demands from a young man a head of his enemy to prove his maturity, but the old men still remember those times.
Excursion over cultural sights of Kalimantan Island - 'must visit' points of interest
When in Pontinak, on the West of Borneo, definitely visit the monument, which marks the equator line. You will not only be able to stand on “the middle” of the Earth, but you will also …

Open
You can’t say, the Dayak people weren’t swayed by civilization. Many of them got an education, easily work with a computer and sit in the Government. But the majority still chooses life in the “long houses”. This is not just an expression – the houses of the Dayak people are elongated. Basically, it is one big house, where each family has a small room with the entrance to the shared terrace. Such a construction may look like barracks and there is a reason for that: at the alarm signal the warriors in total battle attire lined up in front of the house. Now the warriors are in the past, but the locals still go hunting in armor, with a spear and a kris.
Now everyone can learn about the life and manners of the Dayak people. The locals gladly meet guests and tell them about their daily life. During the organized trip you will not only see the daily routines of the aborigines but also spend a night at a long house and participate in a captivating performance. However, if you are peace-minded, you may try to communicate with the locals on your own. Just remember: not many people here speak English, so mostly you will have to express yourself with gestures. Copyright www.orangesmile.com
Your active city break in Kalimantan Island. Attractions, recreation and entertainment - best places to spend your day and night here
Borneo is one of the best places for diving on the planet. There is everything you want and more: good infrastructure, unique underwater animals, places to dive for the beginners and for …

Open
The Dayak people have some interesting rituals, which a lucky traveler may become a witness to. Ngamean, for instance. This ceremony is held before going on a journey. They make a fire with the help of flint and steel, and see if they will have luck on the road by the way the flame is burning. The arguments in a family are solved with a special dance Ngelaem Ponam Penega. Though, it is hard to say, whether it’s been brought by the modern times or had originated long time ago. The thing is, earlier the youngest member of a family might have been killed during a conflict. 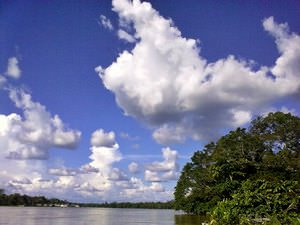 The ancient religion of the Dayak people tells to have a Tatau Lale ceremony during a funeral. It is believed, that without the help of the living, the soul of the dead is doomed to a bleak afterlife. That’s why the locals cut a mahogany Sapundu figure, which represents the one, who passed away. There are no rules in creating this symbol, it just should look good. Before the Sapundu they sacrifice animals and then conduct ceremonies.
Top hotels in Kalimantan Island for business trip or short vacation
Most hotels and inns are found at East Kalimantan, here is the luxury hotel Jatra. It’s located near the central area of Balikpapan and is ideal for family holidays, as young guests …

Open
If you’ve been all around the villages of the Dayak people, try to find the floating settlements of the “sea gypsies”. Those numerous nomadic people are glad to meet the travelers. It is perfect to get to Kalimantan on the 17th of August. In this day they celebrate Hari Proklamasi, an Independence Day of Indonesia. The feasts, fireworks, and races along the river in Banjarmasin city – there is a lot to see. While walking through the streets of this city during the time of Ramadan, you can visit Pasar Vadai – a pastry fair. Erau festival, where different local tribes wear their traditional clothes and perform their ritual dances, will be interesting for any explorer. There is a big celebration of Chinese New Year in Singkawang. Naik Dango festival, when the Dayak people thank the Earth for a big harvest, is held at the end of spring-the beginning of summer.

This guide to traditions and festivals in Kalimantan Island is protected by the copyright law. You can re-publish this content with mandatory attribution: direct and active hyperlink to www.orangesmile.com.
Kalimantan Island - guide chapters 1 2 3 4 5 6 7 8

City tours, excursions and tickets in Kalimantan Island and surroundings

Religion is separate from the state in Indonesia. Freedom of religion is guaranteed to all residents. Therefore, Sharia law does not work. However, Adat norms are used in everyday life. These are pre-Islamic traditions and beliefs of the indigenous population. This is an unwritten law that has been transformed into a local legal system under the influence of Islamic and European legal systems. Civil and criminal liabilities were not separated. Capital punishment and corporal punishment were not common. The locals were much more likely to resort to fines and compensation. … Open

The creation of the so-called travel bubble is good news for hotels in Langkawi as the country’s tourism is suffering just like most destinations worldwide. Tourists arriving on the island do not need to spend precious days of their vacation at a hotel, waiting for the quarantine period to end. They are free to move everywhere but are required to stay at least three days in Langkawi. All tourists intending to visit the island should also take an RT-PCR (reverse transcription-polymerase chain reaction) test no longer than 72 hours before their arrival.

Colors of Kalimantan Island in photos

Traditions and festivals in cities around Kalimantan Island

Surabaya
For example, locals consider touching the head to be one of the greatest insults. This rule of conduct is related to people of all ages, so don’t pet children in a way that may be common in many other countries. According to local tradition, the left hand is considered wicked, so all the important steps and gestures have to be made with the right hand. It is prohibited to ... Open »
Java
Despite dramatic changes that have occurred to the island during last hundred years, thriving national crafts are still there. Java produces great arm blanche, which is appreciated by collectors and hunters from around the world. There are also craftsmen who make incredibly beautiful items of precious metals; Javanese art and jewelry is handed down from generation to ... Open »
Bali
When you attend a restaurant or visit a house of a local resident, make sure you do not sit with your legs crossed. This position is considered a sign of secrecy, mistrust and disrespect. In general, the people of Bali are very cordial and friendly. They are happy to help tourists to get to the local places of interest and will actively support a conversation on any subject. ... Open »
Denpasar
One of the main distinguishing features of the modern city is heavy traffic. One can travel around its territory by car freely only at night because in the daytime the traffic literally stops. That is why many travelers prefer to walk on foot, slowly exploring picturesque streets. An interesting form of local transport is horse-drawn dogcarts, by which you reach any part ... Open »
Sulawesi Island
Alive people treat the dead ones, as if they didn’t pass away, but are just sleeping. They bring them food and water, and a newspaper. They even leave a chamber pot. It is natural here to talk, greet and say goodbye to those, who are already dead. A body, filled with formaldehyde, stays in a translucent coffin in a house, where he lived before. There are two reasons for ... Open »
Lombok Island
A participation is one of many festivals in Lombok will give you some unforgettable memories. In the middle of February, there are festivities in honor of Princess Mandalika. A parade, a music show, a race, games, and competitions, eating of Nyale and glowing warms, which has a symbolic meaning – all of these are an integral part of the festival. Here they celebrate Muslim ... Open »