Fun and festivities in Israel - celebrations, festivals and cultural events 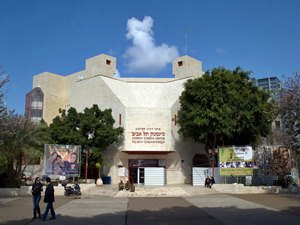 Many colorful festivals and festive events take place in Israel year after year. One of the most important festivities in the country is the Jewish New Year also called “Rosh Hashanah”. It is celebrated for two days; on the new moon of the first and second days of the Jewish autumn month “Tishrei”. During this holiday, it is common for the whole family to unite at the table with traditional Israeli dishes. Each dish symbolizes one wish: fruits of pomegranate tree for fertile land, fish heads for superiority in everything, round bread “halal” for health, apples and honey for happiness. On Rosh Hashanah, the Jews are invited to go to the synagogue. During the festive service, the “shofar” is blown calling for repentance and appearance before the Court of God.
Shopping in Israel - best shopping places, what to buy?
Tourists can enjoy a rich and diverse shopping experience in the small area of ​​Israel. The Israeli authorities appreciate the guests of the …
Read further
Another favorite Israeli celebration is Hanukkah. It is celebrated for eight days during the winter season of short nights. Hanukkah is designed to dispel the dank darkness. The main Hanukkah custom is the lighting of candles in a special candelabrum “Chanukiah”. The candles are lit up gradually: one is lit on the first day, two on the second day, and on the last, eight candles are lit. The candelabrum is then placed at the door of the house or on the window as a sign of a wonderful vessel with oil which has avoided the desecration of the Greeks. Fried doughnuts “Sufganiyot” or potato fritters “Levivot” are usually eaten on Hanukkah. During the holiday, children play with a four sided spinning top “Sevivon”. Each side bears a letter of the Hebrew alphabet, the initials of the words that form the phrase “a great miracle happened there”.
Authentic Israeli festivals are of huge interest. One of the main celebrations is the annual festival of Israel in Jerusalem which brings together creative elites from different countries of the world. At the festival, there are performances by dance groups, orchestras and also theatrical productions. The festival of arts “Lights of Jerusalem”, also takes place in Jerusalem. The festival “Balabasta” is organized at the famous bazaar “Mahane Yehuda”. It involves representatives of creative professions, illusionists, fakirs and clowns. In the atmosphere of the oriental open-air bazaar, cheer hubbub of a carefree audience, the aromas of spices, the rhythms of music and the light of lanterns weave with one another. The event “Darom Adom” is held in the northern part of the Negev desert area in the month of February. Within the framework of the event, excursion tours, farmers’ fairs, seminars and creative master classes for children, cycling and concerts are organized. Copyright www.orangesmile.com
For active traveler - national parks, landscapes and nature of Israel
Israel is located on the border of two parts of the world and belongs to the Middle East region. The western coast of the country is washed by the …
Read further
With the participation of theatricals of Jewish and Arab origin, the “Masrahid” monodrama festival is regularly held in the city of Akko. During the event, festive performances are staged by theater directors from Israel, Palestine and other Arab countries. They often become a launching pad for young actors and are a place for exchange of opinions by famous playwrights. In the process of celebrating, high-level political and societal problems are discussed. Every year, the International Puppet Theater and Film Festival is organized in Holon. The festival unites many puppet shows and films, creative workshops for children and other events. The largest dance event in Israel is the Karmiel Dance Festival, which brings together dancers from all over the world to participate in concerts of ethnic and folkloric dance, classical and modern, jazz, hip-hop, etc. 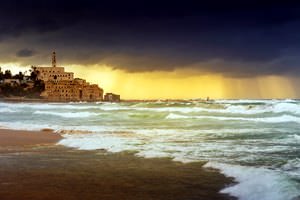 In the historical region of Galilee, a cheerful celebration is held commemorating the useful properties of olives and products made from them. In dozens of local villages and settlements, festival guests can walk through the groves of olive trees, listen to legends relating to them, visit oil mills and learn the secrets of cooking olive oil. During the Hanukkah vacation, a ten-day festival “Ta’am Kinneret” is held in the Jordanian desert. During the festivity, restaurants and grocery shops are set up around Lake Kinneret. Culinary master classes are also held. The festival is attended by famous chefs, offering guests signature dishes and desserts. You can get to taste the traditional food of the first settlers of the area in the festival. The main dish of the festival is Hanukkah doughnuts.

This article about national fests and celebrations of Israel is protected by the copyright law. You can re-use the content, but only under the condition of placement of an active link to www.orangesmile.com.
Israel guide chapters 1 2 3 4 5 6 7 8 9 10 11 12 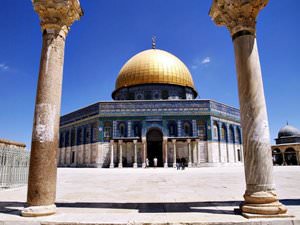 Perhaps, one of the best known and most visited monuments of Jewish civilization is the Temple Mount. That’s a great area located in the Old City of Jerusalem. This sight was built on a hill. It is enclosed by a stone wall that reaches the height of 45 meters. The first mention of this place dates back to the 10th century BC. For many years, this area is researched by archaeologists who manage to discover new artifacts.

Scientists believe that even more ancient settlements existed there, and buildings serve as an evidence of that. For people who adhere Judaism, the Temple Mount continues to be one of the most sacred places in the world. The first Temple in Jerusalem was originally settled in this area; now there is the second temple. In the immediate vicinity, there are many places of … Read all 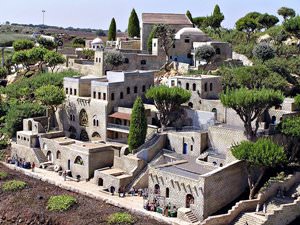 The Israeli city of Latrun represents a theme park 'Israel in Miniature', which introduces visitors architectural and historical landmarks of the country. Models of the most outstanding and beautiful buildings of Israel are presented in the park. Among them are beautiful palaces and temples, museums and theaters, as well as modern hotels, which are also considered important architectural monuments.

There are 350 layouts in the park. It is remarkable not only for its diversity, but also for its structure. If you look at the park from a bird's-eye view, you can see that the tracks on its territory form an important religious symbol of the country - the star of David. Literally, each layout in the park has its own secret. So, next to the copy of the Knesset building, one can hear clear … Read all
All unique sightseeing Israel

Attractions and entertainment in top cities of Israel

Tel Aviv
Azrieli shopping and leisure center is also an interesting place. There is a variety of shops, halls with slot machines, attractive cafes and observatory with an observation deck that is popular among vacationers. In warmer months, concerts are often held on the center’s roof. There is also a modern cinema in the center. By nightfall, vacationers will find numerous night clubs and discos, much of them are concentrated near the waterfront and the old port. Great entertainment can be found at … Read more

Jerusalem
Jerusalem International YMCA is known as the most famous health center in the city. The park offers its customers a huge selection of complex programs and cosmetic procedures. There is also a swimming pool in the territory of the center, as well as several institutions dedicated to healthy eating. Fans of spa treatments will also find a nice place to stay in the city as they are welcome in Akasha Wellbeing Retreat and Spa. Although nightlife facilities are not very popular among locals, … Read more

Acre
The Bahai Gardens is considered the biggest and most beautiful park in Acre. The park hides an important landmark – the tomb of Bahá'u'llah, the founder of the Baha'i religion. For many years, this religion was an important part of the local culture. The large park lies in the immediate outskirts of the city. This is a place with incredible landscaped design. Visitors can see colorful, artistically made flowerbeds, admire trees and decorative bushes. Some parts of the park have green lawns … Read more

Haifa
A walk through the local Haifa Educational Zoo would be pleasant too; both youngest visitors and their parents would enjoy it. Zoo is located in a hilly area and covers a vast territory; the habitat of animals is close to natural. Sports entertainment fans would like relaxing in the Hecht park, as it is ideal for active holidays. Silky grass, plenty of paths for hiking and biking, breathtaking panoramic views of the sea and equipped playgrounds for children have made it one of the most … Read more

Netanya
Near the city, you'll find large Shefayim Water Park, which is mainly visited by vacationers with children. The total area of the water park is about 10 hectares, it is well equipped and surrounded by beautiful parks. For the convenience of visitors, the territory of the center is divided into several thematic zones. There is a water zone with pools and slides for kids and adults, as well as an extreme park with the most incredible rides for thrill-seekers. Visitors can also enjoy specially … Read more

Nazareth
Among fans of hiking through picturesque areas, one of the most popular attractions is Mount Favor located in the immediate vicinity of Nazareth. The slopes of this mountain are overgrown with ancient oaks, myrtles, and firs. These places are among the most beautiful in the area. During interesting tours, tourists can admire rare plants and watch birds. There are several excellent viewpoints on a mountainside. Climbing to the top of the mountain remains the most popular activity for … Read more

Eilat
Perhaps, King’s City Eilat is the most famous and popular entertainment complex in Eilat. The center is open in a large and incredibly beautiful building that resembles an old palace. The choice of amusements is nothing but incredible. In King’s City Eilat, visitors will be able to explore mysterious caves, make a boat ride on the Solomon River, and participate in various performances and events. A rich choice of rides for any taste is another advantage of this modern and attractive … Read more

Map of fun in Israel