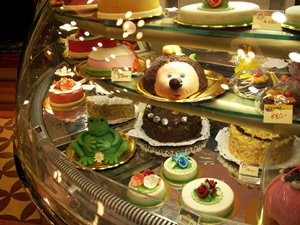 The best museum in the world for Hungarians is located in Hungary, in the city of Szentendre. All exhibits in the 'sweetest' museum of the planet are made of marzipan. The founder of the museum is the world-famous confectioner Károly Szabó. The marzipan museum was opened in 1994, since then its collection has been constantly expanded and renewed. The museum halls are a mediatory between the sumptuous pastry shop and the art gallery. Sometimes you can hardly believe that the masterpieces presented in the glass-paneled glass windows are literally made of sugar.
'The sweet reproductions' of the world-famous paintings, the old furniture, the numerous statuettes and the tiny copies of the famous sights - the boom in the imagination of the talented confectioner is simply surprising. The most original museum expositions are the figure of Michael Jackson, as well as the realistic portrait of Mozart. Most of the exhibits exhibited were made by Károly Szabó. Some masterpieces were created by his talented pupils.
One of the halls, in spite of the museum's particularity, is devoted to the historical theme, and more precisely to the complicated relations between Austria and Hungary, which have also influenced the life of the talented confectioner. At present there are 5 marzipan museums in the world, the most famous and most visited is the museum in Szentendre. The popular museum is combined with the pastry shop and the cozy café, where visitors can taste the delicious original sweets and buy the exclusive gifts. ... Complete sights collection 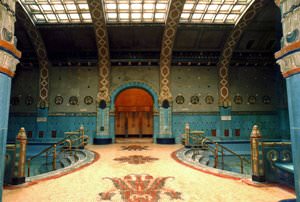 Budapest is famous for its unique thermal springs and baths. No wonder that one of the most beautiful bathing complexes in the world is located in the Hungarian capital. Thermal bath Gellert forms a single complex with a hotel of the same name and has been named after a high hill, at the foot of which it is located. The main feature of the historical thermal bath, built more than a century ago, is its unique architecture.
High marble columns and carved arches, beautiful marble finishes and elegant stained-glass windows, lined with elaborate mosaic baths and paired - a very aristocratic and refined atmosphere reigns here. The most popular among visitors is a lower tier, where there is a hammam, a sauna and three baths with water of different temperatures. Today, clients of the bath complex are provided with many additional services, they can enjoy massage sessions or take a mud bath and swim in the chic pool with a sliding roof.
There is also a chic outdoor swimming pool with very beautiful cascades, artificial waterfalls and stone terraces. Gellert Bath will be an excellent way to get not only physical, but also aesthetic pleasure. Economical travellers should take into account that visiting bathhouses is paid. Those who want to minimize material costs, should take a towel, a special cap and shoes. All the above accessories can be taken in the bath for an additional fee. ... Complete sights collection 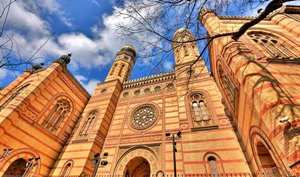 The Great synagogue is located on Dohany Street in Budapest. It is one of the largest in Europe today. It was built in the middle of the 19th century. The largest Jewish community in Budapest lived in the area. Famous architect Ludwig von Förster worked on the project of a luxury building. He designed the equally beautiful building of the synagogue in Vienna before that. One of the main features of the two-story building is two towers with black domes. Their height is 44 meters.
Beautiful white and red bricks were used in the construction of the synagogue. Almost all the finishing elements of the historic building were preserved in their original form. The main hall never ceases to amaze with its scale. It can accommodate up to 3,000 parishioners at a time. Another building was built next to the synagogue in the first half of the 20th century. The Jewish Museum was opened there. Many Jews who lived in Budapest at that time were artists and writers. A significant part of the museum's exposition is devoted to their works.
The Nazis established their headquarters in the synagogue building during World War II. The Jewish cemetery is a vivid reminder of the difficult war times today. It is located in the inner courtyard of the synagogue. About 7,000 Jews who died during the war years are buried there. A beautiful monument was opened on the territory of the synagogue not so long ago. It is dedicated to the victims of the Holocaust. Reconstruction of the religious monument began immediately after the end of the war. It lasted until the 90s of the last century. ... Complete sights collection
This article about unique points of interest in Hungary is protected by the copyright law. You can re-use the content, but only under the condition of placement of an active link to www.orangesmile.com.
Hungary guide chapters 1 2 3 4

All unique landmarks of Hungary on the map

Photogallery of landmarks of Hungary

Trip ideas for regions of Hungary

Budapest
If winter turns the lake located in the park into a huge ice rink, summer prepares another amazing entertainment for travelers. This is boating. It is so popular here that this lake is often called Boating Lake. When night falls to the city, here start operating numerous clubs and discos. Among the most popular night clubs of the city we should definitely mention Angel Club, as well as Alcatraz Restaurant & Club – this is a restaurant and a club. Those, who like dancing, will prefer Capella … Read more

Debrecen
Not far from the zoo is the Botanical Garden, which never ceases to amaze visitors with a variety of exotic plants and flowers. The garden's area is divided into several thematic zones, which makes a walk even more fascinating. Here one can enjoy beautiful groves, greenhouses with beautiful flowers, and a large recreation area with cozy benches and gazebos. Little travelers will surely enjoy a local Luna park with its numerous playgrounds and exciting rides. Most shops and malls can be … Read more